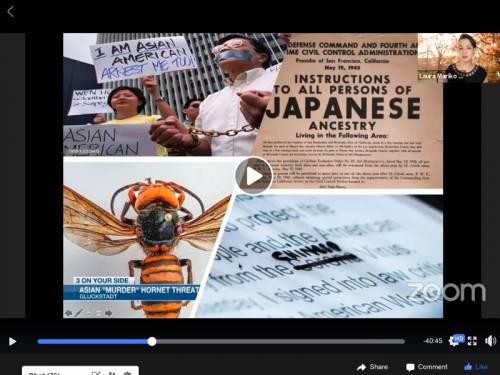 LEXINGTON, Kentucky — The Rev. Laura Cheifetz was halfway through her presentation in Monday’s “COVID at the Margins” discussion of anti-Asian racism when she advised that sensitive viewers might want to hit the “mute” button.

She then proceeded to list several examples of overt Anti-Asian racist acts since the coronavirus emerged, including a person sideswiped by a car while walking their dog, the occupants of the car yelling “Trump 2020! Die c—-! Die!”; a white man forcibly removing a 92-year-old Asian man from a store, causing the victim to fall on his head and back; a Burmese man and his son stabbed at a Texas Sam’s Club; and a couple on public transportation in San Francisco being yelled at, the woman being called “a Chinese coronavirus b—-.“

“It also causes Asian parents to have to think through how they coach their children through racist incidents,” Cheifetz said. “Conversations in Asian-American families about whether you wear a mask are a risk analysis. It’s like, ‘Will I wear this to protect myself and others from contracting the virus, or does it just draw attention, and is someone going to yell at me or throw something at me or spit on me?’”

Sadly, none of this is new to the Asian and Asian-American community in the United States, as the previous half of Cheifetz’s presentation had shown. The May 18 discussion was the second episode of the series produced by offices in the Presbyterian Mission Agency’s Compassion, Peace & Justice ministries and Racial Equity & Women’s Intercultural Ministries. This week’s episode, “Anti-Asian Racism in the Wake of COVID-19,” was produced by the Presbyterian Committee on the Self-Development of People.

SDOP coordinator the Rev. Dr. Alonzo Johnson opened the conversation with a brief meditation on Galatians 3: 26-28:

“It reminds us that we are called to be one people in Christ,” Johnson said of the text, “that in a time of division, xenophobia and virulent racism, we are called to be a unified and unifying people. It is important to recognize that the Galatians text does not mean that we get absorbed into something where we lose our identity, or our sense of distinctiveness. It reminds us that it is here that we celebrate our distinctiveness, our purposes and our role in the body of Christ.”

The Rev. Denise Anderson, coordinator of the Office of Racial and Intercultural Justice, pointed out that the Presbyterian Church (U.S.A.) adopted an anti-racism policy at the 222nd General Assembly in 2016 and said, “Anti-racist effort is not optional for us as Christians. It is central to our discipleship.”

Click here to watch “COVID at the Margins: Anti-Asian Racism in the Wake of COVID-19.″ 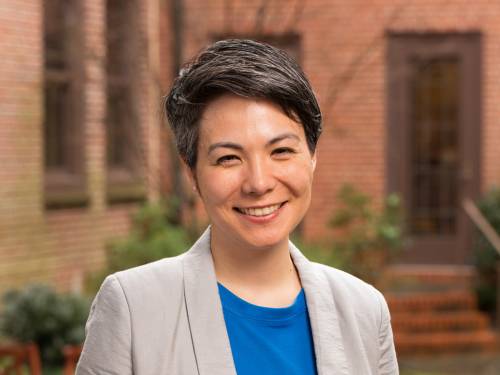 Cheifetz’s presentation illustrated how that has not been the experience of people of Asian descent in the United States now or at any point. She talked about the history of people from Asia in the Americas going back to the 1600s, pointing out that Asian-American is a demographic that includes more than 50 ethnic groups and more than 100 languages. She went through several of the common racist tropes against people of Asian descent, including Orientalism, a belief steeped in European intellectualism that “the East” is inherently less developed and civilized than “the West”; yellow peril, the belief in stereotypes of people of Asian descent as unemotional invaders; the model minority myth, often used to pit racial minorities against each other and minimize problems of people in Asian communities; and the perpetual foreigner, a belief that no matter how long someone of Asian descent has lived in the United States, they’re not really American.

“In my own personal experience, I understood I am often not American enough, or not white enough for most Americans, and I am definitely not Asian enough for most ‘real Asians,’” said Cheifetz, a multi-racial Asian-American of Japanese and white Jewish descent. “This is my home. There is no other place that will take me. And my home is not very friendly right now.”

That brought the conversation back to the current situation and a wave of racism from street-level violence to impacts on Asian-owned businesses and frontline workers to government action.

“The current administration has also scapegoated China for mishandling the virus, instead of taking responsibility for the ways in which this government fell short, and now, naturally, we have the ‘Asian murder hornet,’” Cheifetz said, showing images of current and past racism. “Due to the white supremacy framework in the United States, this is not the first time this has happened. This comes in waves, depending on what’s going on in U.S. foreign policy, what’s going on in the economy, and hate speech generally being more or less accepted.”

Cheifetz came not just with history and issues but steps people can take to combat Anti-Asian racism — “Not spitting on people and just being a good person is not sufficient,” she said. Among her recommendations were:

And Cheifetz, assistant dean of Admissions, Vocation, and Stewardship at the Vanderbilt Divinity School, advised not participating in “oppression Olympics. Just because there are a lot of different ways that racism is experienced by different groups of people of color in the United States doesn’t mean one is better or worse. Something that I really appreciate about the Public Theology and Racial Justice Project at Vanderbilt Divinity School is that the framework it uses believes that all expressions of racism and white supremacy are legitimate and also legitimately unhelpful and sinful.”

In a question and answer time after Cheifetz’s presentation, discussion planning team and SDOP National Committee member Larry Low said he thought the use of the term “white supremacy” needed clarification.

Cheifetz replied, “When I talk about white supremacy, I talk about the framework under which this nation was founded and has operated. It’s no one’s ‘fault’ that it began that way. We’ve all been breathing it. Someone likened it to the yeast in bread, in that it’s already baked in. It’s too late, and we can’t just pick it out and we can’t pretend that it’s not here.

“It’s so much a part of who we are that all of us are needed to fight against and present a different culture. That’s what I think is so great about Christianity is that it already gives us alternatives for how we are in the world. It’s just that so many of us learned a warped Christianity that is more beholden to power and white supremacy than we get when we read the Scriptures and read that Galatians text.”

The next episode of “COVID at the Margins” will be about the impact of COVID-19 on the LGBTQIA+ community at 12:30 p.m. on Monday, June 1 on the Gender Justice PC(USA) Facebook page.

How should the church stand up to anti-Asian racism?

‘We’re not all in this together’

‘COVID at the Margins’ begins Monday