Karla occasionally returns to the U.S. and is available to visit congregations. Email her to extend an invitation to visit your congregation or organization.

Karla Koll serves as a professor of history, mission and religion at the Latin American Biblical University (UBL), an ecumenical university located in San Jose, Costa Rica, that was founded in 1923. UBL students come from throughout Latin America and the Caribbean, and students and professors are from various Protestant traditions and Roman Catholic communities. The university’s residential and distance programs in biblical studies and theology prepare church and community leaders to serve the church and to be agents of transformation in their communities and countries.

The UBL’s focus on contextualized learning helps students affirm God’s desire for fullness of life for all. All students are encouraged to reflect theologically out of the contexts from which they come. In UBL classrooms, Pentecostal pastors learn next to Roman Catholic nuns. People with years of leadership experience in these faith communities study together with new believers whose intellectual curiosity has led them to study theology. Students from indigenous cultures and communities of African ancestry share their perspectives. Together with faculty members, they seek to construct theological responses to the urgent challenges facing the peoples of Latin America.

Costa Rica borders the Pacific Ocean to the west, the Caribbean Sea to the east, Nicaragua to the north, and Panama to the south. Tourism and commerce are Costa Rica’s main industries, accounting for 68 percent of its GDP. It has a growing technology/computer chip industry, and its main agricultural products include bananas, coffee, sugar and beef. Although Costa Rica is one of the most prosperous nations in Central America, a substantial portion of the population lives in poverty.

About three-quarters of Costa Ricans are Roman Catholic, and approximately 15 percent are Protestant.

For Karla Koll, the Latin American Biblical University campus in Costa Rica is a place God’s Word and God’s presence in the world can be encountered in new ways. She first experienced this when she arrived there as a theology student in 1984. “The institution that was then the Latin American Biblical Seminary offered me the opportunity to learn from and with Central Americans about what it meant to follow Jesus Christ in the midst of the struggles for peace with justice in the region,” she says. “It was during this time that I discovered my calling to serve in Central America in theological education and to build relationships between Christians in the U.S. and Central America.”

Today Karla is helping UBL students discover how they can more faithfully and effectively serve Christ’s church. “I have the joy of guiding women and men into deeper understandings of their faith in Christ as my colleagues and I provide them with tools for working in God’s mission in ways that transform lives and communities,” she explains.

In addition, Karla’s work at the UBL gives her the opportunity to help Presbyterians in the United States “be drawn to greater commitment to work in God’s mission for the fullness of life for all.”

“My study of the history of Christianity in the region helps people understand the religious field today and see where there are possibilities for transformation,” Karla says. “I offer people tools for analyzing mission efforts as we seek to be faithful to God’s call.”

As she pursues her work, Karla is inspired by 2 Corinthians 5:17–21, which describes our calling as Christians to be engaged in reconciliation. “As followers of Christ, we are called to be ambassadors for the new creation God is bringing about,” Karla emphasizes. “The call to work for reconciliation has been central to my ministry.”

Karla, a member of Pueblo Presbytery in southeastern Colorado, began her ministry as a theological educator in Latin America in 1986 when she accepted a PC(USA) mission appointment to Nicaragua.

After eight years in Nicaragua, she returned to the United States to pursue doctoral studies in mission, ecumenics and the history of religions at Princeton Theological Seminary. As she was completing her doctorate, she re-entered mission service in 2000 and began work in Guatemala, where she served until June of 2013. Karla holds an undergraduate degree from St. Olaf College in Minnesota and two master’s degrees from Union Theological Seminary in New York.

Karla is married to Francisco Javier Torrez Bermudez, a native of Nicaragua. Their adult daughter, Tamara Torrez-Koll, works as a legal assistant in an immigration law practice in Portland, Oregon. 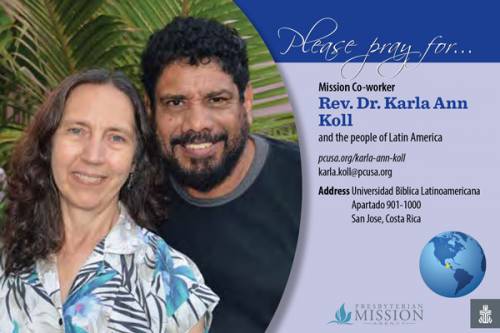 Use this card as you pray for Karla Koll. The card includes a photo and an overview of her work. Karla is professor of history,…

Give in honor of the ministry of Karla Ann Koll