Register for the next Matthew 25 Online Event – Eradicating Systemic Poverty: Global Issues
Make A Donation Click Here >
Home › What We Do › Where We Work › Co-workers › Case Studies in Transformation

Where are there signs of new life in Christianity in Central America and the Caribbean? What is God doing in this part of the world?

With these questions in mind, a group of academics and practitioners gathered here in Costa Rica for four days in January to analyze experiences of churches and faith-based organizations in the region. The consultation was sponsored by the Center for the Study of World Christian Revitalization Movements of Asbury Theological Seminary. The director of the consultation, Dr. Bryan Froehle, approached the Latin American Biblical University and me to help with organizing the event and identifying participants with diverse church and academic backgrounds. During the consultation small groups reflected on case studies that had been prepared beforehand. Most of the participants expressed amazement at being part of a conversation process that was truly ecumenical and interdisciplinary. 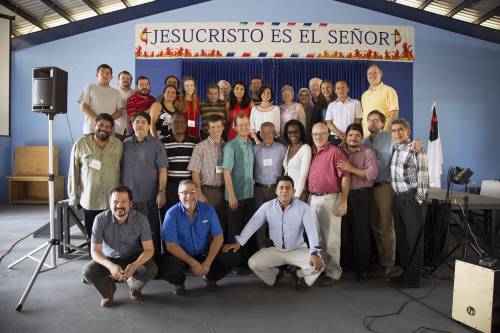 Consulation 2016 group: Researchers and practitioners from nine countries gathered in San Jose, Costa Rica, in January to study religious change in the region

From Nicaragua we learned from the experience of the New Jerusalem Church in La Chureca, a notorious city dump in Managua. Pastor Magdalena Herrera was moved by a news report she heard about the people who lived in La Chureca gathering food to eat and things to sell out of the mountains of garbage. Outraged that people were living in such conditions in her country, she went to La Chureca and began to tell the people there that God loved them and that their poverty was not part of God’s plan. The people came to believe both in God’s love and in themselves. They organized not only a church but also a school and a feeding program for children. In what people in the community describe as a new Exodus, they moved out of the dump into new houses they obtained from the Nicaraguan and Spanish governments.

In Guatemala City a group of Jesuits run the Belize Bridge Educational and Labor Project, a training program that offers young people from a marginalized urban barrio opportunities to break the cycle of violence and poverty through education and personal development. The project seeks to empower the young people to avoid the gangs and become agents of change in the community. This case highlights the importance of religious institutions in building bridges between marginalized and excluded populations and groups with available resources, in this case financing for university education and job training. 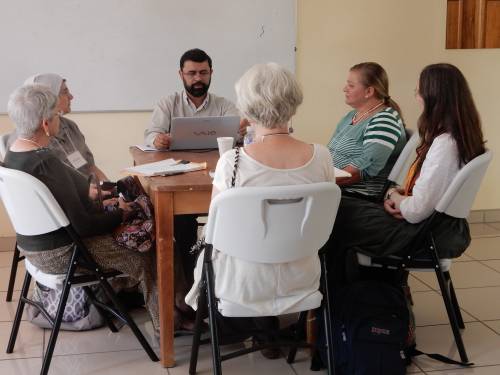 Small group work during the consultation

The Roman Catholic Church in Cuba is experiencing significant renewal after decades of imposed silence. The church learned to live without resources or access to social power. As the restrictions on religious practice have been lifted in recent years, the church has found new avenues for both evangelization and service. Pilgrimages dedicated to Our Lady of Charity have tapped into reserves of popular piety. Young people go out in pairs to converse about spiritual issues with their neighbors. In mission houses all over the country people gather under lay leadership to read the Bible and worship. As the church looks toward the future, it is working actively to promote reconciliation among Cubans of different political perspectives on the island, as well as between Cubans in Cuba and those now living elsewhere.

The case study of the Vida Abundante (Abundant Life) megachurch here in Costa Rica engendered the greatest amount of controversy during the consultation. Approximately 3,570 people participate in worship at the Vida Abundant church in Coronado, an area of San Jose, every weekend, enjoying the relaxed worship led by gifted musicians and the motivational preaching. Undoubtedly many people find healing and support for their personal relationships in this church, but participants in the consultation raised questions about whether or not the church is encouraging people to work toward a more just society. In Central America the number of megachurches, defined as those churches with more than 2,000 participants, is growing as the disparities in the distribution of wealth increase.

In El Salvador the faith-based organization A-Brazo was founded in the aftermath of the 2001 earthquakes by Hilda Bojorquez, a civil engineer. Today A-Brazo works within several local and international networks to address the needs of local communities, especially in efforts to overcome poverty and respond to the destruction caused by natural disasters. The networks allow A-Brazo to direct resources where they are needed.  A-Brazo also promotes a vision of holistic mission in both their development work and the theological training they provide for participating churches. 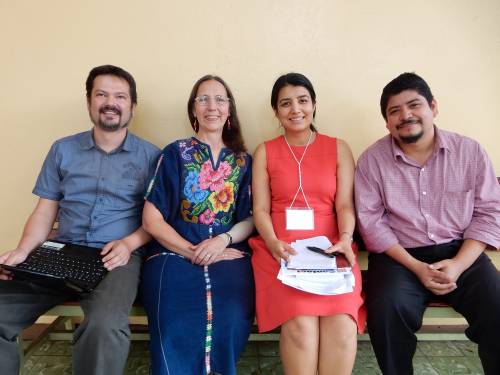 Undoubtedly lives are being transformed in each of the cases we examined. However, being faithful to the God who raised Jesus from the dead and calls all to new life means asking tough questions about the contexts in which we live. Are the changes we see part of the in-breaking of God’s reign of justice and peace or are we observing religious accommodations to the prevailing system of inequality and structural violence? Are the programs of faith-based organizations aimed at addressing community needs part of processes of change or do they discourage people from organizing to press for more far-reaching changes? We rejoice that the proclamation of God’s love, especially for those who live on the edges of society, is changing lives in places like La Chureca in Managua.

Part of my role as a missiologist serving on a theological faculty is to encourage people, including my students and colleagues, to think deeply and critically about what it means to follow Jesus in Central America today. In the January consultation we raised more questions than we answered. Now it falls to me to edit the two volumes, one in English and one in Spanish, from the consultation. They should be available as e-books in three or four months. There are also short videos, in Spanish with English subtitles, that have been produced for each of case studies. It is our hope that these materials will be of interest to those who study mission and religious change in Latin America.

I am grateful for the support from churches and individuals that makes it possible for me to be part of these conversations and the ongoing work of mission here in Central America. Thank you. May we all experience resurrection joy as we look for signs of new life wherever we are.

In the hope of God’s coming Reign,
Karla