A Letter from Karla Koll, serving in Costa Rica

I have never had to flee for my life. Though I have often been surrounded by violence during the 25 years I have served in Central America as a theological educator, this violence has seldom been directed at me. Many Central Americans today cannot say the same.

When I first went to live in Nicaragua in 1986, the US-backed irregular counterrevolutionary forces known as the Contra were attacking civilian and military targets in their war against the Nicaraguan government. On occasion, I was in places where I could hear attacks underway, but I never came under fire. I visited victims in hospitals who had lost limbs from landmines placed by the Contra, and I went to way too many funerals. I kept enough cash on hand to buy a plane ticket out, knowing that my US passport would allow me to leave.

By the time Javier and I, together with our seven-year-old daughter, Tamara, went to live in Guatemala in 2000, the peace accords signed at the end of 1996 had brought nearly 40 years of armed internal conflict to a formal end. However, the country was far from living at peace. The underlying economic injustices were never resolved, and the weak state was incapable of ensuring safety for the population or bringing perpetrators of violence to justice. Over the 13 years we lived in Guatemala, the levels of violence rose. A cousin of one of Tamara’s classmates was kidnapped and killed. Some students came to her school with armed bodyguards. One of Javier’s classmates from the Rafael Landivar University was murdered. By 2010, pastors studying theology with us at the Evangelical Center for Pastoral Studies in Central America (CEDEPCA) spoke of debates in their congregations as to whether to hire armed guards. Those who pastored churches in barrios where the gangs were in control had to decide whether to pay off the gang for every activity they wanted to have at the church. I often heard shots when I was at the CEDEPCA office in Guatemala City. Every week, it seemed, a member of the CEDEPCA staff was a witness to a violent crime or had a family member who was the victim of a crime. I rested much more easily once Tamara left for college in the US in the fall of 2011. In the two months before we left Guatemala in 2013, two people I knew were kidnapped, including a CEDEPCA student who was released unharmed. 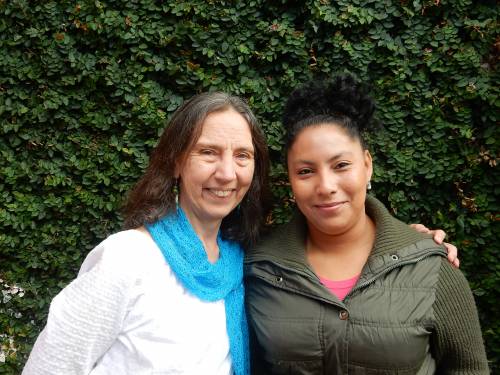 The nature of emigration changed as well over the years we were in Guatemala. In the early years, I knew many high school students who headed for the United States immediately upon graduation with plans to work for a few years or to build lives where there were more opportunities. The coyotes, the folks who arranged the details of travel north, were respected neighbors who facilitated dreams. Don Jorge drove Tamara to school every morning in a bus purchased with funds sent to him by his son working in the US. “He’s such a good son,” he told me. Some women talked to me about what good fathers their husbands were because they had gone to the US to send money back for their families; others mourned for the men who had ceased to communicate with their families. Remittances, the money sent back by migrants in the US, paid school fees, covered the cost of building houses and churches, provided medical care, and often bought food. In short, migrants kept the economy of the country going and continue to do so today.

However, as gangs took control of more and more neighborhoods, people increasingly sought to get their children to safety. Crime organizations took over the process of moving people north, taking advantage of increasing desperation to charge higher and higher fees, backed up by threats of kidnapping or worse if demands for payment were not met. Just after we left Guatemala in late 2013, US border officials began to notice increasing numbers of unaccompanied minors from the Northern Triangle of Central America — Guatemala, Honduras, El Salvador — trying to enter the US. Many were hoping to join family members already in the US; almost all were fleeing violence.

When I arrived in the US in May of last year to visit supporting churches, news was breaking that the US government had been separating families at the US border and sending children off to shelters and detention centers in 17 states. Even though the policy has supposedly ended, the number of migrant children being held by the US government has continued to climb. Every day, more desperate families arrive at the southern border of the United States.

For many years, Nicaragua boasted the lowest crime rate in Central America. In recent decades, Nicaraguans have tended to migrate to Costa Rica, where nearly half a million of them live and work. Since April of last year, when protests against the Ortega government were met with violent repression from police and parapolice forces, Nicaraguans fleeing for their lives have sought refuge in Costa Rica. 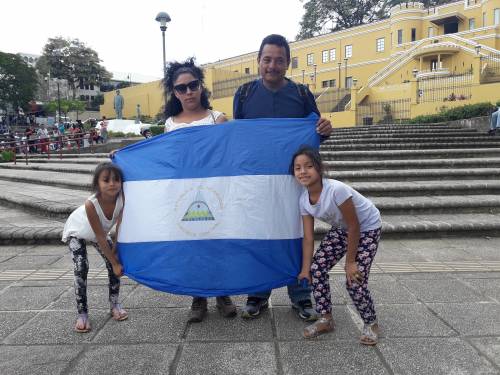 Evelin and Arturo in San Jose with their daughters and the Nicaraguan flag. After their home was burned down by paramilitaries, the family fled Nicaragua to seek asylum in Costa Rica.

Evelin and Arturo, who had joined their friends and family members in protesting the Ortega government, fled with their three children after the paramilitaries burned down their house in July. They were allowed to cross the border into Costa Rica without documents and were given an appointment with the immigration office to apply for asylum. At no time were they detained or separated from their children. When we got a call in early August asking if we had room in our home for a family, we said yes. After a few weeks with us, Evelin and Arturo received their identity cards as asylum seekers and found other housing. Finding steady work has been a greater challenge, even with work permits. While they dream of being able to go back to Nicaragua, their children are safe and enrolled in school.

No, I have never had to flee to protect my life. During my years of mission service here in Central America, I have been privileged to walk beside people working for justice, even at great risk to their safety. In recent months, I have been able to accompany some of those who fled to Costa Rica. I am grateful for the prayers and gifts that make it possible for me to be here at this time. With your ongoing help, I will be able to continue in this service of accompaniment. Evelin and Arturo, together with their children, also say thank you.