Irene Westling Foulkes (1932–2016), professor emerita of New Testament of the Latin American Biblical University (UBL) and former mission co-worker of the Presbyterian Church (U.S.A.), died on April 15 of this year. In this newsletter I have chosen to write a letter to Irene.

It has been a few months now since you left us. The jacaranda tree we planted to mark the spot where we buried your ashes greets me every morning when I arrive on the campus of the UBL. Your presence lives on here in many ways. 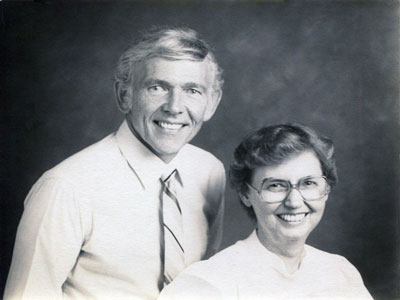 I never had a chance to ask you how you felt the call to mission in Central America. I do know you were already committed to coming to Costa Rica when you met Richard (Ricardo) Foulkes, your life partner, at the wedding of your best friend from Wheaton College, Doris Emanuelson, and John Stam. Soon the four of you were on your way to San Jose. I wonder how you managed in those early years when you were the only woman on the faculty of the Latin American Biblical Seminary (SBL). Today when the faculty of the UBL meets, over half of us around the table are women.

Less than 1 percent of the population of Costa Rica was Protestant or evangelical when you arrived in 1955. Hardly anyone had access to the Bible. What changes you saw as evangelical churches grew rapidly and the Roman Catholic Church opened itself up to the reforms of the Second Vatican Council! One of your Catholic neighbors spoke at your funeral about the Bible studies you held in the neighborhood to bring evangelicals and Catholics together. 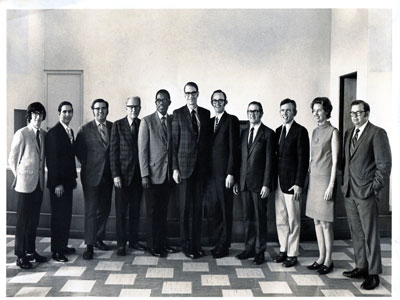 SBL faculty in the early 1970s

When I came to the SBL as a student in 1984 you befriended me. At that point you and Ricardo had come to the conclusion that you could no longer stay with the Latin American Mission, the organization that had supported you from the beginning of your work in Costa Rica. Those were difficult days in Central America. Military governments supported by the United States in Guatemala and El Salvador were massacring the civilian population in an attempt to prevent structural changes in those societies. In October of 1983 a Nicaraguan graduate of the SBL, Noel Vargas Castro, had been killed when the Contra, the irregular forces supported by the United States, attacked the school in northern Nicaragua where Noel and his wife were teaching. The faculty of the SBL joined with many others in Central America and beyond to call for an end to U.S. intervention and for support for the self-determination of the peoples of the region. The Latin American Mission refused to speak out. At that point the SBL asked the Presbyterian Church (U.S.A.) to support you and Richard as mission co-workers. I am so glad our denomination stepped forward. When I became a PC(USA) mission worker in 1986 in Nicaragua you welcomed me as a colleague.

You embraced an incarnational understanding of mission and entered fully into life in Central America. In the 1970s, as the SBL sought to identify with Latin America and articulate a theology that could respond to the needs and dreams of the excluded majorities of the continent, you and Ricardo supported the move to contextualized theological education. Soon you began to focus on women as interpreters of Scripture and as pastoral agents. You wrote one of the first texts in Spanish to incorporate gender analysis into the study of the Bible. My students and I in Guatemala followed the steps you offered for decolonizing our minds to rid our Biblical interpretation of patriarchal images for God. 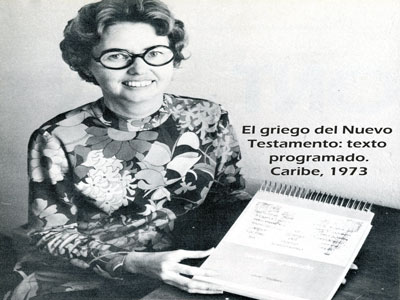 Greek of the New Testament by Irene Foulkes

I always admired your pedagogical creativity and flexibility. When you began teaching here and discovered that there was no Spanish language textbook for teaching Greek, you wrote your own. How many thousands of people in Latin America have learned to read the language of the New Testament with your text? In the 1970s you helped the SBL launch its distance learning program, PRODIADIS. After the founding of the Latin American Biblical University in 1997 you eagerly traveled to teach intensive courses at the different institutions that served as branches of the UBL. One of the last pictures taken of you shows you wearing a headset in front of a computer screen teaching a class online.

The last time you taught at the UBL was a Saturday morning open class in October of 2015. More than 50 people came to hear you talk about how to work with the difficult texts we find in Paul’s first letter to the Christians in Corinth. You insisted that day, as you always did, that the inclusive love of Jesus Christ, especially for the excluded, must be our primary hermeneutical principle when we read the Bible. You left us with the task of continuing to interpret the Bible in ways that feed the hope of those who seek fullness of life. 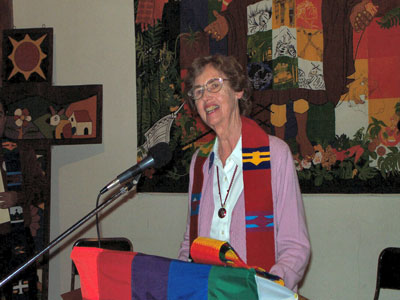 Once you joked with me about how you and Ricardo had served with an evangelical faith mission at a time when the evangelical missions didn’t have much money. Then you moved to the Presbyterian Church (U.S.A.) when support for mainline Protestant mission was declining. You told me how grateful you were for the pension you received from the PC(USA) that allowed you to live comfortably here in Costa Rica after you retired. I am so glad that the PC(USA) was faithful to you after your years of faithful service.

It occurs to me that now I am about the same age you were when I first met you. I look at the young women in the classrooms of the UBL today who are excited about reading the Bible, studying theology and serving as pastors. I can only hope that I will be able to inspire them as you inspired me. I am thankful for all that I learned from you.

Friends, I am grateful for the support of churches and individuals that makes it possible for me to serve here at the institution where Irene gave so much of her life. If you haven’t yet committed to this ministry to future church leaders in Latin America, I invite you to join me through your prayers and financial commitment. Together may we carry out God’s mission for God’s church in this part of our world.

“Do not fear, for I have redeemed you; I have called you by name, you are mine.
When you pass through the waters, I will be with you; and through the rivers, they shall not overwhelm you;
when you walk through fire you shall not be burned, and the flame shall not consume you. (Isaiah 43:1b-2, NRSV)

Even as I thank you, I want to let you know that this is a critical time for our congregations and all people of faith to commit themselves to support mission co-workers like Karla. Our global church partners greatly value her service, and you well know how important this ministry is in building connections between the body of Christ in the U.S. and Costa Rica.

We have historically relied on endowment interest and the general offering from congregations to sustain the vital work of all of our mission workers. Those sources of funding have greatly diminished. It is only through the gifts of individuals and congregations that we are able to keep Karla doing the life-giving work God called her to do. A year ago, in May 2015, we had to recall some mission workers due to a lack of funding. World Mission communicated the challenge to you, and you responded decisively and generously. Through your response, we heard the Spirit remind us, “Fear not!”

Today, I’m asking you to consider an additional gift for this year, and to increase the gift you may consider for 2017. Sending and support costs include not only salary but also health insurance and retirement contributions, orientation, language training, housing, travel to the country of service, children’s education, emergency evacuation costs, and visa/passport costs.

My heartfelt thanks for your prayers and support of our Presbyterian mission co-workers. In the coming season, we will celebrate God’s sending of the Christ child, the source of the good news we share. May you experience anew the hope, peace, joy, and love that are ours because “perfect love casts out fear” (I John 4:18).

Thank you for saying “yes” to love.