Jim occasionally returns to the U.S. and is available to speak to congregations. Email him to extend an invitation to visit your congregation or organization.

About Jim McGill’s ministry: Jim serves with the Evangelical Church in the Republic of Niger (EERN) and the Presbyterian Church of South Sudan (PCOSS) to ensure sustainability for clean water and sanitation at both community and user levels. He works with the church in being a strong participant in the rural development of Niger and South Sudan and an effective advocate for the health of its people. Jim and his wife Jodi previously served together in Malawi and more recently in Niger where Jodi served as a nursing and public health educator with the EERN to train and staff church run health clinics and to educate students in its new nursing school.

Country Context: Niger is often called the gateway between North Africa and Sub-Saharan Africa. It is one of the continent’s most economically impoverished countries and is at the bottom of the UN’s human development index. Niger has the highest fertility and population growth rates in the world. Fewer than 50 percent of children are enrolled in school, and its annual per capita gross domestic product is only about $800.

Farming is limited by frequent droughts, and the country’s vast desert regions are growing because arable land is falling victim to droughts, excessive cultivation, overgrazing and deforestation. While 95 percent of Nigeriens are Muslim, the government is secular and there is openness to the Gospel. Most non-Muslims in Niger are Christian or adherents of traditional religions.

About Jim: Jim began mission service in 1995, working alongside Jodi with the Church of Central Africa in Malawi. He worked in the areas of water and sanitation while Jodi worked in the areas of health and nursing. Although Jodi is not able to join Jim at this time as he serves the EERN in Niger because of family responsibilities, she continues to be an abiding inspiration and support in Jim’s ministry. Together the McGills continue to serve God with the people of Niger and the PC(USA).

Jim received his bachelor’s degree in physics from Wake Forest University and his master’s degree in geological engineering at the University of Arizona. Prior to his service as a mission co-worker, Jim spent many years in Africa as the child of Presbyterian missionaries to Congo and doing geophysical research with the Geology Department of Duke University.

Jim and Jodi are the parents of six children, twins Jason and Michael, Salome, Selina, and twins Joseph and John. They are members of Columbia Presbyterian Church, Decatur, Georgia, Presbytery of Greater Atlanta.

Watch a video of Jim McGill 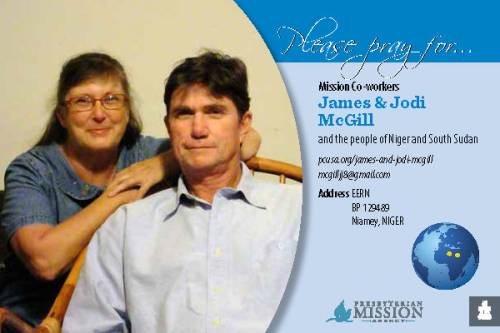 Use this card as you pray for Mission Co-workers James & Jodi McGill. The card includes a photo of them and an overview of their…

Give in honor of the ministry of Jim McGill