A letter from Jim and Jodi McGill serving in Malawi

We will be leaving Mzuzu toward the end of June 2015 and arriving in Decatur, Ga., for a year of interpretation assignment.  As always, moving is a multifaceted phenomenon. For all of us there is the personal and emotional angst of leaving friends.  For Jim it is hard to leave the work he is doing, not because it won’t continue without him but because he will miss being part of the team as they progress and sharing the many learning opportunities.  For Jodi she will miss hearing “Teacher, teacher” from the 40+ 2-6-year-olds in her Sunday school class.

Simultaneously each of us has something we are looking forward to: having conversations and worship together with congregations, seeing family and friends, renewing personal and professional connections, being able to take part in school and extracurricular activities that are not available here, and per all of our children—going to a drive-thru fast-food chain. 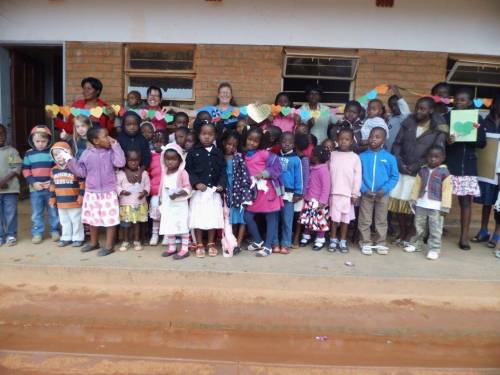 Jodi with her Sunday School class on her last day teaching

While in the U.S. Jim will continue to support the work of the SMART Centres, which are building sustainability in the water and sanitation sector in Central and Southern Africa.  The SMART Centre in Mzuzu is run independently by our PC(USA) partner, the Church of Central Africa, Presbyterian (CCAP), Synod of Livingstonia Development Department. It works in collaboration with many partners, including other SMART Centres in Tanzania and Mozambique, partners from the Netherlands, and also with the Watsan Centre of Excellence of Mzuzu University.  Jim believes that much of his working experiences have led toward the work of the SMART Centre—building up local businesses to provide both communal and ‘self-supply’ services to all people in Malawi.

Through the sharing of resources and information the CCAP SMART Centre has used water and sanitation as a method for building bridges between different ethnic and religious groups, The SMART Centre work has already begun to be spread outside of the Synod of Livingstonia, and also outside of Malawi.  It is exciting to see the lead of the Church in the provision of safe water and safe sanitation to improve the lives of individuals, as well as helping to build community among all people.

It is an honor to have been entrusted both by the congregations in the U.S.A. and by our partner church, the CCAP, to be the representative of each to the other. We are available and it would be our privilege to visit.  Sunday morning services, mid-week gatherings,  youth groups, circles, or men’s breakfasts are different possibilities.  Please email us using our new address mcgilljj8@gmail.com to make sure we can keep in contact with you.

We are so very thankful that God, because of your financial and spiritual support, has allowed us to serve here in Malawi.  It has been made clear to us, however, that we need to spend this time in the U.S.A. not only as another way to serve but to give us time to take care of the academic and developmental needs of our children.

We ask for your prayers as we transition into the U.S.A.  Michael and Jason will be entering their junior year in high school, which may be a challenge not only culturally and socially but also academically as they have been in a British system school, which is very different from an American curriculum.  Salome and Selina will be in 8th grade, the last year of middle school, which has its own inherent challenges.  And it will be hopefully 5th grade for John and Joseph.  Joseph faces some learning and speech difficulties, so we are uncertain as to where he will fit in. We are grateful for the wonderful services the school system offers.

In case you are not aware of the severe financial shortfall facing worldwide ministries, I am copying a portion of an email written by Hunter Farrell, director of World Mission:

Due to shortfalls in contributions in 2014, we are facing the prospect of having to recall up to 45 mission workers over the next two years. I am sharing with you a letter signed by 22 moderators of the Presbyterian Church asking for fervent prayer and sacrificial giving in order to support the church’s mission workers in their countries of service (http://bit.ly/1cgHkGj). We ask you to read and sign the petition, to share it with others, and to remember this need in your prayers. In particular, I would ask you to share the petition with your church community so they might help us advance our incredible mission legacy.

As we mentioned in our last newsletter, there are grave concerns over the poor maize harvest this year. The crops in the south were ruined from the floods while the crops here in the north are poor due to inadequate rain. The government is predicting at least a 40 percent reduction in maize production.  We just returned from a brief visit to Embangweni, where friends who say they harvest on average 100 bags of maize are now estimating only 6 to 9 bags from their harvest! Prayers for a modern-day miracle are needed—just like the oil in the temple lasted for more days than there was oil, people’s maize needs to last longer than expected. Also prayers that the government will act quickly and with integrity to source and distribute maize, and prayers that there will be adequate assistance for Malawi.

We thank you for walking with us these 20 years as PC(USA) co-workers, and we look forward to meeting many of you in the U.S.A.