Make A Donation Click Here >
Home › What We Do › Where We Work › Co-workers › Rope Pumps for Water, Rope Pumps to Stop Violence

A letter from Jim McGill in the U.S., on Interpretation Assignment from Malawi

We mourn again the loss of life due to violence in the U.S., this time in Orlando. Our thoughts and prayers go out to all affected. Coming a year after the Mother Emmanuel AME Church shooting in Charleston, S.C., when we personally experienced the outpouring of prayers and support from our Malawian brothers and sisters, I know that again throughout Africa Christians are praying and supporting the families of those whose lives were changed by this act of violence.

I was able to share the love and support of the Malawian people with the Presbytery of Charleston Atlantic, a presbytery deeply affected by the Charleston killings. We discussed together that while Africans know within minutes when prayers are needed by their brothers and sisters in the U.S., violence in Africa, if reported, most often seems to be additional ‘white noise’ to all of the troubles throughout the world that overwhelm Americans—nowhere more evident than in South Sudan.

I have been blessed with an opportunity to work with the PC(USA) and the Presbyterian Church of South Sudan (PCOSS) in South Sudan. In 2010 I joined a team from the PC(USA) to assess the Hospital and health work in Akobo, South Sudan. PCOSS made the health work in Akobo a priority, but the re-opened hospital was in need of water and sanitation. Through the special offering of the 2012 Churchwide Gathering to fund water wells in Akobo, Presbyterian Women (PW) raised $40,655.82. However, since that offering was donated the situation in Akobo has been too volatile to be able to work there.

Continuous instability resulting from three civil wars since 1955 has meant that virtually no development has occurred in what is now South Sudan, and many people have spent their lifetime in refugee camps. South Sudan became independent from Sudan in 2011, but a third civil war began in December 2013, in which it has been estimated that over 300,000 have been killed. Soldiers carry assault rifles throughout the country, which adds to the feelings of insecurity. Many areas within South Sudan are surviving through emergency relief, making trainings and survival of small business enterprises almost impossible. It is extremely difficult to work in development with such instability, yet without development, where will the foothold for stability come? Which needs to come first? 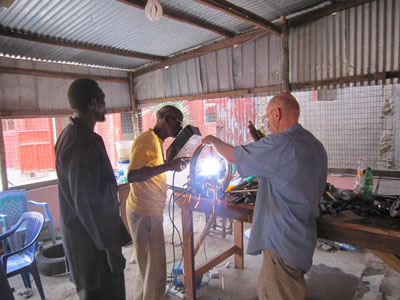 The PCOSS believes that the time to work on development is now, so has requested support in building up its water and sanitation programs. Using the 2012 Presbyterian Women’s funds, I brought together Mr. Henk Holtslag, a technical trainer from the Netherlands, and Mr. Walter Mgina, a manual drilling expert from Tanzania, to start training South Sudanese fabricators in Juba. Mr. Alfati Halzber and Mr. Taban from Juba began their training in the production of low-cost water and sanitation by fabricating rope pumps and manual drilling equipment. The pumps and tools were then flown by the Mission Aviation Fellowship (MAF) to Pochalla, in the Boma state. Pochalla was chosen by the PCOSS as an alternative to Akobo Hospital. While in Pochalla we trained six water providers in manual drilling techniques using the equipment fabricated by Mr. Alfati and Mr. Taban.

We are very grateful to the PW for this opportunity to work in partnership with the PCOSS in building up their efforts to improve water and sanitation for the people of South Sudan, and most especially its women. As we mentioned in our last letter, the PCOSS is working hard to improve the lives of women in South Sudan, as I was able to witness through the ordination of Rev. Paska, the eighth woman to be ordained in the PCOSS. I was privileged to see her first weeks of pastoring as an ordained minister, speaking with women, and forming the first PW equivalent in Pochalla. It was truly a blessing to be able to attend the induction of these women and to share in Rev. Paska’s first communion service there. 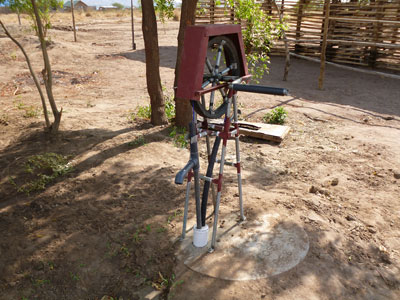 The rope pump fabricated by Mr. Alifati and Mr. Taban installed at a school outside of Juba, South Sudan

In addition to working on rope pump production in South Sudan, we also have become involved in producing rope pumps here in the U.S. to make real Isaiah’s vision of turning swords into plowshares by turning guns into rope pumps. During Christmas celebrations at our church in Decatur, Ga., our pastor, Rev. Tom Hagood, approached me to see how we might work together in supporting the church’s vision of ending gun violence while also supporting the food security and water needs of the Synod of Livingstonia in Malawi. Tom had become involved in bringing gun violence to the attention of the church when he first led his Sunday School class through the PC(USA) documentary Trigger: the Ripple Effect of Gun Violence, which examines the ripple effect that one shooting has on a survivor, family, community, and society. 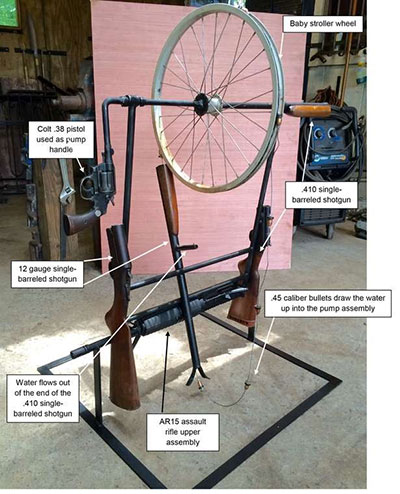 The rope pump sculpture “From the barrel of a gun, a flowering landscape”—a functional rope pump made from guns

After viewing Trigger, Tom saw a Shaun Clayborn YouTube video https://www.youtube.com/watch?v=-WcfU3KLMeU describing how assault rifles were melted and transformed into agricultural tools. Tom asked me if there would be tools that could be fabricated from guns and used in Malawi. We agreed that functional rope pumps could be made from guns, thereby turning weapons into water pumps http://www.ajc.com/news/news/from-the-barrel-of-a-gun-a-flowering-landscape/nrQyn/. Although it would not be practical to ship these pumps to Africa, they could be used locally to raise awareness of both the PC(USA)’s views on gun violence and simultaneously the water difficulties in Malawi.

Tom found a blacksmith/artist in Decatur who produced a working rope pump sculpture. The sculpture was used during a Service of Prayer at the PC(USA) headquarters during the NRA Convention, which took place across the street in Louisville this past May (see https://www.pcusa.org/news/2016/5/23/presbyterians-gather-prayer-and-worship-nra-conven/). The pump sculpture will be displayed at the General Assembly in Portland this month.