A Letter from Jim and Jodi McGill, serving in Niger and South Sudan

Individuals: Give online to E200385 for Jim and Jodi McGill’s sending and support

Before sharing updates, we want to say thank you for praying for Jim and our family through the acute medical emergency Jim experienced beginning in February. Without going into the gory details, Jim had to have two emergency abdominal surgeries in Niamey within about a week of each other and was ultimately medically evacuated to Paris for continued treatment. After 10 days in the hospital in Paris and another week of outpatient care, Jim was sent to the USA, where he continues to garner his strength. He is at Mission Haven in Decatur, GA, which is our U.S. home base and where our elder twins are currently living. Jim should be returning to Niger at the end of April.

We are thankful for much, including the many people who were involved in the situation. The Nigerien and Swiss surgeons who operated on Jim, the American doctors who urged us to consider medical evacuation and facilitated the transfer with the medical evacuation organization, and PC(USA) Mission Agency staff who were the point people for all communications. And Jim’s sister and sister-in-law graciously dropped everything in their lives to suddenly fly to Paris to alternate weeks supporting Jim during and after his hospitalization while Jodi and the children stayed in Niamey.

During the time of Jim’s hospitalization in Niamey, Jodi was at the hospital to be his guardian, which is generally required in nearly all hospitals there. Guardians are family members who watch the IVs, tend to the patient’s needs, monitor the patient’s condition, cook for and feed the patient, communicate on behalf of the patient, and find the hospital staff when they are needed. There must be a guardian day and night. Jodi was that guardian. Therefore, we are also so thankful for the many people who supported our family by chauffeuring our kids to school and dropping off meals for them. We are grateful for the prayers for Jim at our local congregation, at the schools of our children, and the workplaces of friends, and for the many who visited to pray with and over Jim.

We received messages from around the world that people were and are praying for Jim’s recovery and for our family. A Nigerien friend prayed thankfully that we had friends like those of Job, which was a surprise, as generally Job’s friends are remembered for blaming Job for his problems. But, what our Nigerien friend was saying was, “When these friends heard about Job’s troubles, they agreed to meet and visit him. They wanted to show their concern and to comfort him.” Job 2:11 (NCV). The prayer was a reminder that even if they were not physically present, we had friends and family who were joining in prayer to show their concern and offer comfort. Thank you.

Last October, Jim traveled to South Sudan for five weeks and was specifically pleased at the completion of the structure of the SMART Center in Juba and the continued collaboration he experienced with others who are working in the WaSH sector, including governmental personnel.

While the SMART Center structure is quite simple, it marks the beginning of a stable program that will offer training and facilitate sharing of expertise in WaSH programs. The shipping container in the photos below will function as an office and storeroom, while a shelter built around it will be utilized as a meeting and training area.

It was planned that the Center would host training sessions in late March on the manufacturing and use of variations of rope pumps, sanitation slabs, and ‘3R’ — water recharge, retention, and reuse. However, the sessions have had to be delayed, and the hope is that they can take place towards the end of this year. The SMART Center is working together with Peter Mahal, Director General of Rural Water Supply and Sanitation within the Ministry of Electricity, Dams, Irrigation and Water Resources, who has been our government contact since our first visit to Juba in 2014. He remains very enthusiastic and supportive of the goals of the WaSH program under the WaSH). His presence adds credibility and durability to what we are doing.

SMART Center in Juba. The shipping container is the red enclosure attached to the caged area. 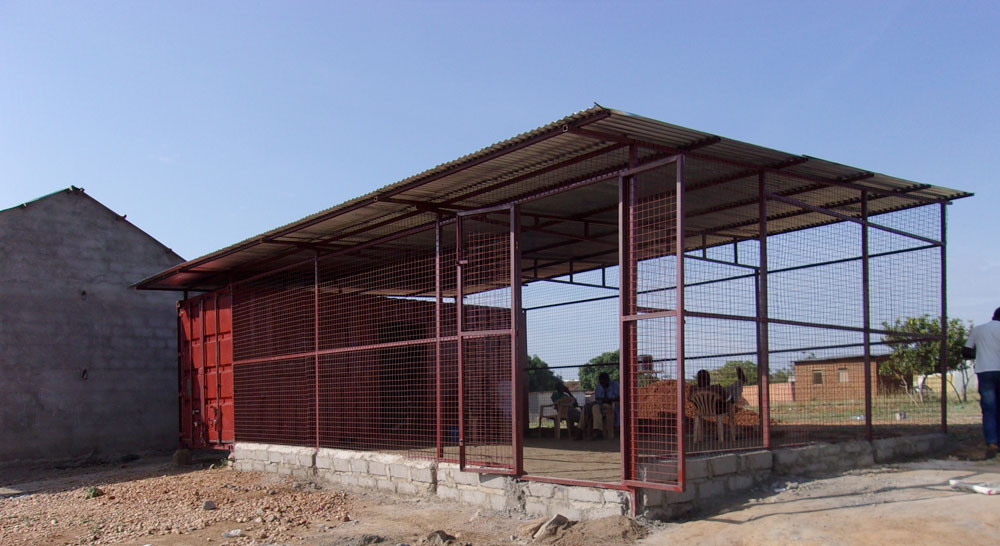 Image 1 of 4
WaSH activities have begun progressing in Niger as well over the past few months. Three hand-drilled wells now provide water to two churches and one mosque in Tibiri, near the Nigerian border. The construction of the offices for WaSH development has begun next to a new Eglise Evangelique de la Republique du Niger (EERN) church located just behind the airport in Niamey. The Menstrual Hygiene Management (MHM) work for the new EERN primary school in Dogondoutchi has started with the building of a latrine that gives the capability to wash and clean and provides extra privacy for girls. UNICEF and two local non-profit organizations are also working with MHM, so we are now partnering with them to address the need to help keep children, especially girls, in school. Also, a latrine program has been started in Tulware, a predominately Muslim village that is in desperate need of improved sanitation and has agreed to accept an EERN evangelist who will initiate the latrine program. We look forward to building on these projects towards sustainable, safe WaSH within Niger.

Jodi continues to work towards the opening of the EERN nursing school. When the government approved the operation of the nursing school, it expanded the educational authority of the EERN to open a university. We are now the University of the EERN-Esperance (“Esperance” means hope in French). The nursing school moves forward “step by step” per Mr. Chako Cheriff, the director of the CADR (the development branch of the church) and the university. In preparation for opening later this year, Jodi asked Mrs. Maureen Sloan to present a one-day workshop on the Christian Worldview of Nursing to those involved in helping with the school and with key advisors in the operation of the school. The purpose was to initiate conversation around what it means to be a Christian nursing school not only in the final production of nursing students but also administratively and legally. Maureen is a very experienced nurse and nurse trainer, and she and her anesthesiologist husband, Dr. Paul Sloan, volunteer at the Cure Hospital in Niamey and other Cure Hospitals around the world.

The workshop took place March 13 in one of the two furnished classrooms in the nursing school and made use of the school’s newly acquired projector mounted on the ceiling. It was exciting to see the classroom being used and that the equipment worked well. The translated title of the slide that Maureen is pointing to in the photo reads, “God makes the difference in nursing.”

Reflecting on these months, the emphasis has been on prayer and gratitude. During Jim’s health crisis, among the prayers for healing were prayers for accepting and seeking God’s will. The same for the steps forward with Jim’s work in South Sudan and our work in Niger. However, we are ultimately most grateful for God, who is omniscient and omnipresent.

Thank you for your support for us and the work we are able to do through the church.

Jodi and Jim and family