A letter from Jim and Jodi McGill, serving South Sudan and Niger, based in Niger

Individuals: Give online to E200385 for Jim and Jodi McGill’s sending and support

We are ending our first four months in Niamey and continue to familiarize ourselves with life and work. Jodi has been learning more about the health situation, and while Niger is experiencing some health improvements, there remain significant issues. For example, looking at only maternal mortality, over the past 25 years Niger has had fewer women dying from causes related to pregnancy or childbirth. The rate has dropped from 873 maternal deaths//100,000 live births to 553 maternal deaths. But that rate still places it as the fourteenth highest rate in the world (indexmundi.com, WHO). By comparison, Malawi’s current rate is 460 maternal deaths per 100,000 live births, whereas the USA rate, although significantly better at 26 maternal deaths/100,000 live births, has doubled from 25 years ago (CDC, WHO). Another significant issue facing Niger is the high birthrate of 7.5 children per woman, the highest birthrate in the world.

Jodi visited the government hospital with a colleague from the government nursing school and learned that each patient has to provide everything needed for treatment. The patient has to buy not only every medication, but also every needle, syringe, IV tubing, IV fluid, gauze, tape, bandage, anything that is needed, and have it in the outpatient department or at the bedside for the nurses to use.

Niger has a dire need for training nurses and midwives. World Bank statistics show Niger has only 1 nurse/10,000 people, which puts it as the third lowest in the world. The US has 100 nurses/10,000. Therefore, the construction of a nursing school by our partner church, the EERN, will begin to help fulfill that need. There is not enough money to complete and equip the school, but we continue in faith that the first class of students will hopefully start by the end of this year. Director Chako Cherif and Jodi are the only full-time staff of the school. The other teachers will be Nigerien teaching staff hired on temporary short-term contracts from the Clinique Olivia and the government-operated nursing school. There are also two expatriate midwives helping to establish the school and teach, one American working with the international mission organization SIM, and one Netherlander with Christian Medical Alliance.

Most of you will have heard of the ambush and killing of American and Nigerien soldiers in October. This has caused several people to write and ask if we are safe. Thank you. While two of Niger’s borders are threatened by terrorists and the EERN continues to have local pastors working there, we as expatriates do not go to those areas and stay safe within Niamey and other cities away from the borders. With its secular government, Niger has become a significant West African partner to the US to help prevent the escalation of terrorism and human trafficking. We ask for prayers for all of the military forces taking part in that effort. 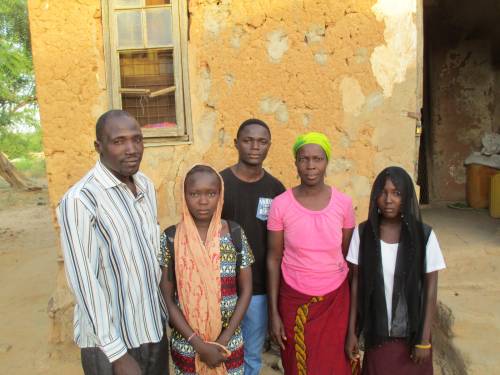 Pastor Yaji and his family in front of the manse at Dougandoutchi.

Hausa is not coming easily, partially because it is not rooted in a Bantu language like the languages in Sub-Saharan Africa. Although the words may be the same, the meanings are entirely different; plurals and tenses are constructed differently; and there are new sounds to try and make your sinuses and tongue produce.

As Jim learns the Hausa language, he learns more about the rhythm of life and the environment. An example is the litany of four or five of the many greetings shared at every encounter, including asking about one’s “tiredness.” This is understandable, as it is hard to sleep due to the hot nights, and then the hot afternoons drain your energy, creating the need for an afternoon repose.

But most interesting has been the experience of being a Christian within a Muslim culture. Most of the Christians are first-generation, and many sermons on Sundays use texts from the Old Testament that may not often be preached from an American pulpit. These messages are relevant to the people’s local situation and bring it to life for us as well.

Salome on the bottom row, far left singing with our church choir for the first time. They sing in French and Hausa with an occasional English praise song. Fortunately, many of the songs are printed in a book and for the ones that are not, a choir member writes them in Salome’s notebook for her to learn.

While staying with Pastor Yaji, Jim has seen pastors and imams come by for fellowship—and it has been impossible to distinguish one from the other by dress, or by how they are welcomed to the home. Once he thought that the man wearing a “kufi” hat embroidered with the star and crescent was Muslim, but instead he was a Christian pastor. They seemed incredulous that Jim would assume the man was a Muslim just because he was wearing a hat with that design on it.

Likewise, in this Muslim majority country, food is easily shared between Christians and Muslims without concern over its ritual cleanliness, except pork, which is of course not served to Muslims. It is the ritual of hospitality that seems to be of most importance. Food and shelter is given to anyone who walks through Pastor Yaji’s gate, which Jim has seen to include several children going to school who live too far to commute, pastors and fellow Christians just passing through, family of patients admitted to the hospital located up the street, and patients themselves who were unable to be admitted.

The Christian families Jim has visited have a morning devotion that follows a liturgy similar to that followed in church and Wednesday evening services. The Word is shared, family members are invited to share any thanksgivings, and prayer follows. For example, prayers of thanksgiving are offered for having arrived safely home or for recovering from malaria. Afterwards, they are asked to share prayer concerns, for which an intercessory prayer is said.

In this vein, we ask for each of you to share privately or with someone and/or us a thanksgiving and prayer concern. We are thankful for the financial and prayer support of each of you and ask that you continue to pray for our family, which is now on two continents, and for the country of Niger.