The description on the United Nations website sounds wonderful!

In 2021, UN Secretary-General António Guterres will convene a Food Systems Summit as part of the Decade of Action to achieve the Sustainable Development Goals (SDGs) by 2030. The Summit will launch bold new actions to deliver progress on all 17 SDGs, each of which relies to some degree on healthier, more sustainable and equitable food systems.

The Summit will awaken the world to the fact that we all must work together to transform the way the world produces, consumes and thinks about food. It is a summit for everyone everywhere – a people’s summit. It is also a solutions summit that will require everyone to take action to transform the world’s food systems.

Guided by five Action Tracks, the Summit will bring together key players from the worlds of science, business, policy, healthcare and academia, as well as farmers, indigenous people, youth organizations, consumer groups, environmental activists, and other key stakeholders. Before, during and after the Summit, these actors will come together to bring about tangible, positive changes to the world’s food systems. 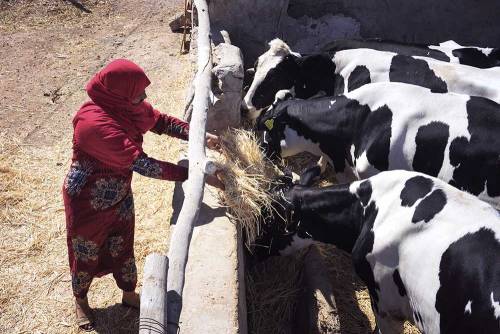 The problem is implicit in the description of the stakeholders above in red. The list begins with the ‘key players’ of science, business, policy, healthcare and academia, and ends with the phrase ‘as well as’ and you see various other stakeholders, such as farmers, indigenous peoples, environmental activists, etc.

The primary critique of a summit being billed as a ‘peoples’ summit’ from those ‘as well as’ stakeholders – the bulk of the population of the world! – is that they have been sidelined and excluded in myriad subtle and not-so-subtle ways.

The remainder of the post, except where noted, is from AGRA Watch Intern Connor Nakamura’s important article written last month.

La Via Campesina (LVC) recently published a position paper criticizing the current trajectory of the United Nations Food Systems Summit (UNFSS21) set to convene in fall 2021 while emphasizing the importance of creating a holistic, fair conversation around global food systems. LVC has played a significant role in reforms of UN food policy processes after the 2008 food crisis where they advocated on behalf of civil society organizations and helped pass major reforms including Guidelines on Land Tenure and Small Scale Fisheries, thus bringing agroecology into the mainstream conversation.

UNFSS21 was conceived in response to a request by the World Economic Forum, a private-sector organization with deep support of powerful member states and philanthro-capitalist organizations (including the Gates Foundation). Social movements have been for the most part unable to meaningfully participate in the conversations emerging from the Summit. The Civil Society Mechanism (CSM) of the UN Committee on World Food Security (CFS) denounced the non-inclusiveness of the conference while pushing for an open call for engagement.

Tristan Quinn-Thibodeau, from ActionAid USA, describes in his article on the US Ambassador to the UN in Rome the importance of the CFS:

The UN Committee on World Food Security (CFS) brings together the three UN food agencies (the Food and Agriculture Organization, the World Food Programme, and the International Fund for Agricultural Development) and all the relevant actors on food security, including civil society, all at the same table. The CFS is a vital forum for a number of reasons. It takes on some of the most challenging and important issues and develops policies for governments to adopt. Currently, the CFS is finalizing important policy recommendations for governments on how they can begin to transition their food systems to agroecology.

Nakamura continues:
The CSM — along with the Chair of the CFS — was eventually invited to participate in consultations around the objectives of the Summit, but both had serious concerns about its direction. LVC states:

The idea that a restricted panel of so-called ‘experts’ should be at the helm of global food system policy is utterly undemocratic. Such an idea has already been rejected by consensus and replaced by the reformed CFS. The current trajectory of the Summit’s build-up process allows the global power elites, and especially the private sector, to once again legitimize themselves as architects of the future of our food system, using its transnational corporate arms to continue to accumulate capital and destroy the planet.

Watch this four-minute video from Kirtana Chandrasekaran of the CFS, which critiques the corporate capture of the Summit, the minimizing of the principle of ‘Right to food’, and the sidelining of civil society and their priorities:

Another area of concern is the appointed Special Envoy of the Summit, Dr. Agnes Kalibata. As highlighted in our recent AGRA Watch report, Kalibata serves as the current President of the Alliance for a Green Revolution in Africa (AGRA) which has deep ties to the Gates Foundation. Dr. Kalibata’s position in the UN conference is indicative of the attempt by corporations to gain preferential treatment in what should be a multilateral and impartial organization, undermining the unique space that civil society has carved out in recent years within the United Nations. Compounded by the failures of AGRA, the whole conference’s legitimacy is called into question.

The UN institutions continue to draw definitions from policy-makers that are situated far away from real food systems, which leads to food systems being understood only in terms of their eventual outcome: putting food on a plate.

La Via Campesina emphasizes that the conference should have a more holistic approach to food systems, and reckon with the drastic negative effects of industrialization and intensification of food production. To achieve true food system transformation, LVC advocates for local agroecological projects, a systemic reduction in agriculture-related CO2 emissions, trade and public policies that promote local food production, and a guarantee of the implementation of the United Nation Declaration on the Right of Peasants and Other People Working in Rural Areas (UNDROP).

La Via Campesina, the voice of over 200 million peasant producers, is convinced that only food systems that are in harmony with nature and respect human rights can protect the life, peace and the wellbeing of people and our generations to come.


One Response to “2021 UN Food Systems Summit sounds like a good thing, but…”