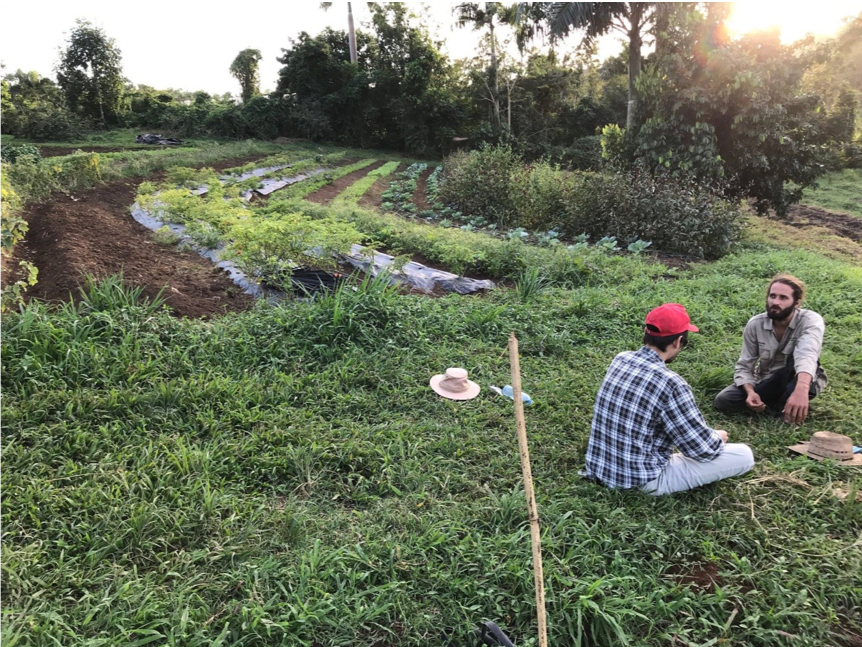 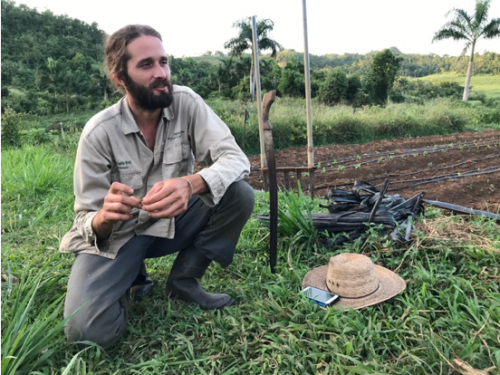 Ian Pagán-Roig, farmer at Finca Josco Bravo, takes break to talk with Jesús and me about the agroecology training they just completed

This is the second part of a two-part series on Puerto Rico, Climate Change and Food. Part one can be found here.

“Back to the Land” and Agroecology

Jesús Vázquez Negron and I visited Ian Pagán Roig at Finca (farm) Josco Bravo in Toa Alta, Puerto Rico, which is one of the three sites at which Josco Bravo Project provides agroecology trainings. Within these trainings, an advanced course just finished on Friday and they are now preparing for the next course for agroecology producers and promoters.

Agroecology for Producers and Promoters 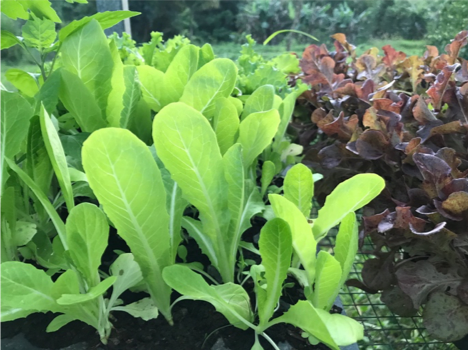 The efforts to revive local food production using organic and sustainable agricultural approaches – called agroecology – are happening in many places around the archipelago. This is happening in a big way through the agroecology training programs at the Finca Josco Bravo, led by Ian Pagán Roig and a team of young local farmers. They have carried out four semester-long intensive training programs and have graduated more than 100 students, several of whom are farming full-time. Finca (farm) Josco Bravo is a member of Organización Boricuá, the winner of the 2018 Food Sovereignty Prize.

Beyond the innovative, tradition-based farming approaches, agroecology re-centers agency into the hands of producers and communities. Agroecology brings communities together in the creation of their own solutions to produce healthy food and conserve soil and water. Agroecology is the primary building block of food sovereignty.

Here is a 2-minute video in Spanish about Ian and the program.

Farm Description (English): Josco Bravo is a family farm in the Toa Alta mountains where Ian Pagán Roig learned to work the land in harmony with nature. Ian is a very experienced young farmer. He is an agronomist by profession, beginning his career in organic farming while still in middle school. At the Josco Bravo Farm, Ian grows vegetables and fruit trees, experimenting with different varieties and feeding the soil with green manures and compost teas. This video (Spanish) demonstrates practices that maintain and improve the quality of the soil through investments in effort … not money. In the Mercado de la Cooperativa Orgánica Madre Tierra (Mother Earth Organic Cooperative Market) in the Roosevelt Plaza of San Juan, you will find their family stall – with Myrna Roig and Miguel Pagán – full of Josco Bravo products. 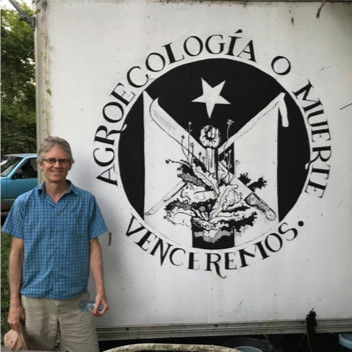 Mural on the back of a truck at Josco Bravo reads, ‘Agroecology or Death… We will win!’ 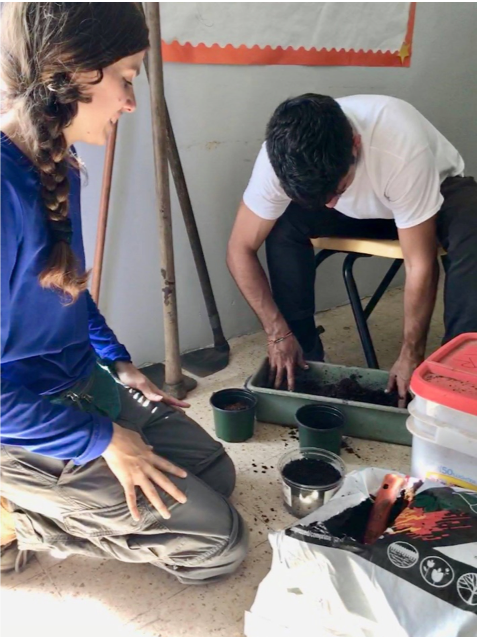 Carol has been able to write proposals and leverage money to fund the materials and the work. They believe so strongly in the educational value of growing food for the 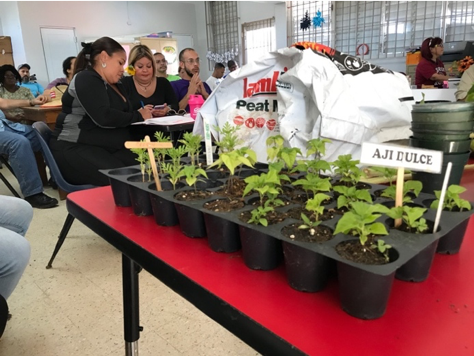 kids AND the teachers! Jesús Vázquez from Organización Boricuá introduced me (Andrew) to Carol, which I visited during a session on Tuesday.

The K-12 school in the Río Piedras area of San Juan is situated temporarily at the site of Angel Ramos school. 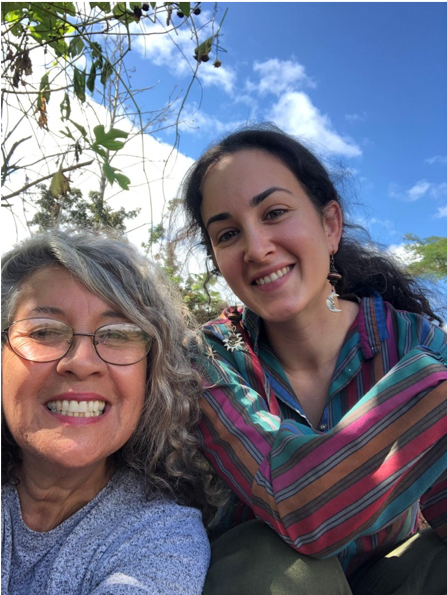 Dalma Cartegena (on the left), a founder of Organización Boricuá – the winner of the 2018 Food Sovereignty Prize, has been teaching agroecology at this public school in Puerto Rico 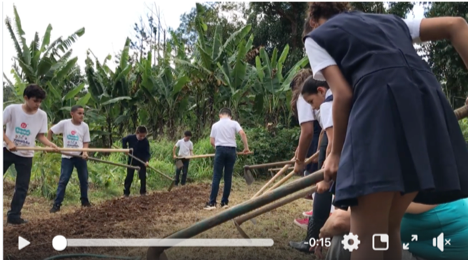 These are 5th graders in Orocovis, the center of Puerto Rico. Theirs is one of 150 schools on the island that have agricultural faculty and curriculum, but one of only three teaching sustainable and organic farming. The kids know their stuff!  Short video of them preparing a bed for planting at the school farm.

Here is a video interview Jesús Vázquez did for Climate Justice Alliance at the Direct Action and Resiliency Camp in Puerto Rico last year.

I happened upon this dairy farm on my way to the southwest corner of Puerto Rico, which is run by Gretchen Colón Suau, a young woman agronomist. Tai South Farm was set up as a dairy farm in 2011 and is producer cooperative. They have a huge solar array on the roof of the barn, which powers most of the operation. Here is a video (Spanish) with Gretchen talking about the farm and practices. It is good to see a farm devoted to bringing on students and with woman leadership in a field traditionally dominated by men. This is their facebook page . 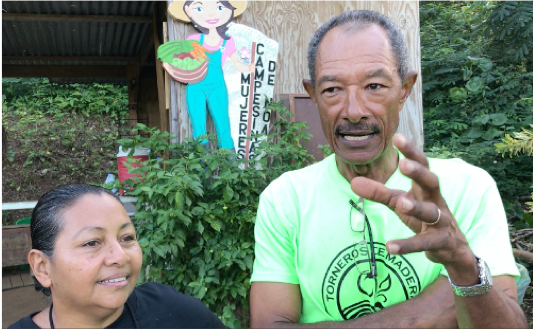 Carmen Umpierre and Carlos Cruz are the founders of Finca NOA farm in Toa Baja, about a half-hour drive from the edge of San Juan. The 15 acres of land they are leasing is on a former, inland Navy base.

Carlos and Carmen also spend a couple days each month at the Presbyterian Camp El Guacio in the west-central part of the island rebuilding the community garden and beginning other agricultural production on campus. 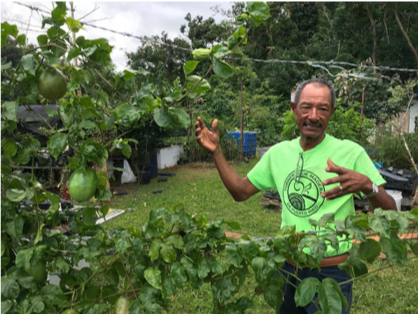 Here at Finca NOA, passion fruit is one of the main crops they’ve begun growing after Hurricane Maria wiped out their crops last year.

Carlos explained to me how the passion fruit flower is pollinated by the carpenter bee, which makes its nest in wood. So, it is important to leave dead trees around so the bees can make their homes. Below you can see the hole the bees carved for their nest in a piece of wood. Without the carpenter bees you would have to hand-pollinate each flower! 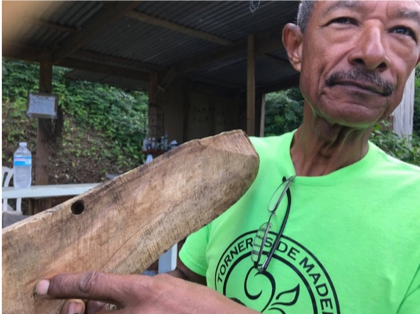 Carlos explained in this short video how the changing climate has changed when gandules (pigeon peas) can be grown. They are a traditional part of Christmas celebrations, but now the timing no longer works. He also described in the clip below (Spanish) how rains are no longer predictable and heavy rains now come at unusual times throughout the year as a result of climate change – “whether or not the US president believes it or not – it is effecting us.”

Great efforts are being made to revive agroecological farming and greater self-sufficiency in food in Puerto Rico. PHP intends to help support these during 2019 and beyond.