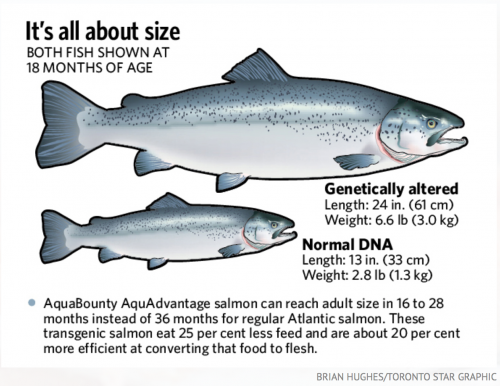 In November 2020, the US District Court for the Northern District of California declared the approval of genetically engineered salmon unlawful based on several environmental law violations. However, it does not prevent GE salmon from being sold in the U.S. while environmental reviews are underway. Chefs, community organizations, consumers, and Indigenous community members from across the country are strongly opposing this controversial release. Additionally, Aramark (ARMK), the 14.6 billion dollar foodservice management company headquartered in Philadelphia, recently updated its company policy in January 2021 rejecting GE salmon citing potential negative impacts to wild salmon populations and Indigenous communities.

AquaBounty has been trying to garner good publicity and brand recognition in Philadelphia. Last month, the company donated 50,000 lbs of their conventional, industrial-farmed salmon to a local food charity due to a growing backlog of fish they have not sold. “They’re just putting salmon on a plate for profit at the end of the day,” says Steve Kurian, fisherman with Wild For Salmon based in Bloomsburg, PA. “They say there’s no chance of the fish escaping into wild populations, but if farmed fish is any indicator, it’s a matter of when, not if. Samuels & Son are promoting to fundamentally change the DNA of the wild salmon which would change the whole environment. And then they’re using unknowing salmon consumers of the east coast to make a profit off of this damage.”

The Muckleshoot Tribe and Affiliated Tribes of Northwest Indians (ATNI), a nonprofit organization representing 57 Northwest tribal governments from Oregon, Idaho, Washington, northern California, western Montana, and southeast Alaska, released a resolution resoundingly opposing GE salmon citing the risk it poses on wild salmon, their treaty rights, and way of life. The release of GE salmon is not only an attack on Indigenous communities who have been stewarding salmon since time immemorial but to wild salmon and the ecosystem they live in. 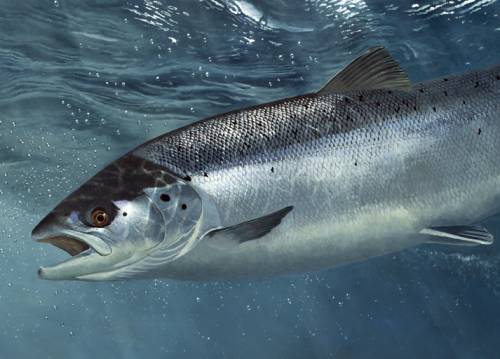 “Wild salmon, made as the Creator intended, are an essential part of the culture, way of life, diet, and spiritual identity of our people, and that’s why our ancestors explicitly protected our right to fish in our treaties with the United States government,” said President Fawn Sharp of the Quinault Indian Nation and the National Congress of American Indians. “Genetically modified salmon directly and unacceptably threaten the sustainability, health, and purity of this irreplaceable resource. Despite the federal judiciary ruling that genetically engineered salmon have not been legally approved for sale, an amoral and greedy corporation is flouting the law and insulting countless Tribal Nations by pushing this monstrous, unnatural, and unhealthy product to consumers, and we will not stand for it.”

Due to the various health and environmental concerns surrounding GE salmon, the lack of consumer demand, and opposition from Indigenous salmon protectors, there is an active movement calling to boycott GE salmon upon its arrival on the market. The #BlockCorporateSalmon Campaign pushed Aramark to make a stronger commitment to not sell GE salmon and are continuing to garner public support for this boycott. More than 80 food retailers, including the largest in the U.S., have made commitments to not sell genetically engineered salmon, including major food service management companies, Sodexo (SDXAY) and Compass Group (CMPGF), and U.S. grocery retailer, Whole Foods (WFM). Several stakeholders engaging the seafood industry (e.g., Global Salmon Initiative, Aquaculture Stewardship Council, FishWise) have also opposed GE salmon.

Major food service company Aramark has made a public commitment to reject Genetically Engineered Salmon in compliance with demands from Tribal Nations. This comes before the first U.S. sales of AquaBounty Technologies salmon. The corporate consolidation of our seafood markets is pushing out community-based fishermen and BIPOC fishermen left and right and destroying our waters…. Read more »
Last May, we sounded the alarm about what would be the first genetically engineered animal in the U.S. market – a hybrid salmon engineered from three different species. Now, it looks like production of these enormous fish in a facility in Indiana will move forward. Today, in a statement from the Food and Drug Administration… Read more »
Find background info and resources below, and call or write to your senators today! Call to Action:  Call or write to your senators and ask them to support and cosponsor the Genetically Engineered Salmon Labeling Act (S.1528), which requires the labeling of GE salmon and independent reviews of the potential impact of GE salmon on human… Read more »
Salmon figured prominently at the Presbyterians for Earth Care Conference held along Oregon’s Columbia River in September. These beautiful creatures are the traditional and cultural heart of the Columbia River tribes. As the keystone species, salmon not only created the biologically-diverse ecosystems of the region, but they also form the economic foundation for the indigenous… Read more »
AquaBounty Still Pushing to Put GE Salmon in Markets We began following this story in May 2018 with this story: Salmon: God’s design or genetically engineered? Then in March 2019 the FDA announced that there were taking GE Salmon off the import alert list, but we didn’t know if that would be the last word:Genetically… Read more »
Tags: #blockcorporatesalmon campaign, advocacy, boycott aquabounty, environment, ge, ge salmon, genetically engineered, genetically engineered animal, genetically engineered salmon, tribal nations, wild salmon