Salmon figured prominently at the Presbyterians for Earth Care Conference held along Oregon’s Columbia River in September. These beautiful creatures are the traditional and cultural heart of the Columbia River tribes. As the keystone species, salmon not only created the biologically-diverse ecosystems of the region, but they also form the economic foundation for the indigenous people who have lived on the land for tens of thousands of years. The salmon were also–sorry vegetarians–delicious, and we ate them once at Camp Menucha and once in the Long House upstream from Menucha. 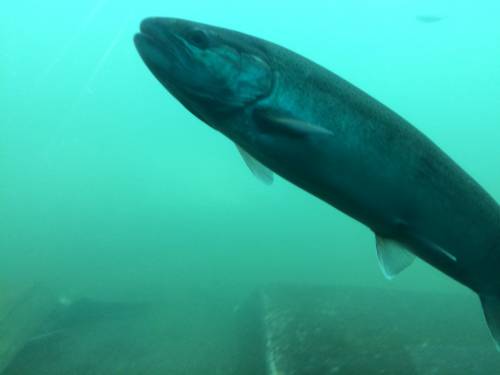 This fine Coho Salmon was making its way up a ‘fish ladder’ built alongside the otherwise unclimbable dams found on the Columbia River. She is returning far upstream – as much as 1,500 or more miles from the ocean – to her birthplace where she will lay 2,000-5,000 eggs. The salmon do not eat on their return voyage and must live off of the reserves built up during their years in the ocean. Their singular goal is to reproduce. Yet not all dams have fish ladders and they can be tiring to climb, so not every salmon completes the epic journey.

In addition, global warming has raised the temperature of many rivers and some spawning areas are getting too warm for eggs to survive. 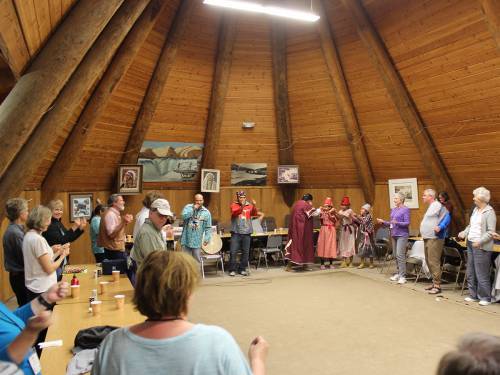 Now the Celilo Falls are silent — buried under the dammed Columbia River. Here is footage from 1956, which shows Native Americans fishing at the falls.

As settlers inhabited the area, they eventually dispossessed the Indians of coveted land and forcibly located the tribes onto reservations, often far from their ancestral homes and away from the river. The theft of land took place throughout the Americas and was justified by the Doctrine of Discovery. Centuries later, the PC(USA) has now called on us to learn about, confess our complicity, and repudiate the Doctrine and the actions that spilled out from it. Learn more here:

Salmon were the focal point of the two-day Spirit of the Salmon Immersion, which led into the Conference.  [More conference photos]

On the second day, an elder indigenous woman led the group in a Water Blessing and her  melodious chanting filled the valley. After we all sprinkled sacred tobacco into the river, she drank the river water and exclaimed its sweetness compared to before the ceremony. I drank some to see and indeed it was!

Afterwards, our group and many Native and Anglo water protectors held a vigil celebrating the sacredness of water and advocating for defense of the river. We celebrated the recent victory — spearheaded by Columbia Riverkeepers and Indian leaders — which defeated the proposed methanol refinery to be built on the banks of the Columbia River. 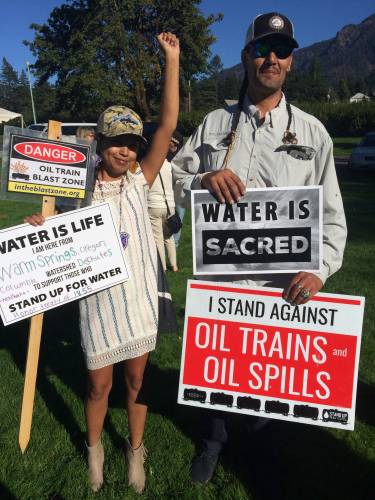 Another victory came through when Oregon Governor Kate Brown told the Oregon Department of Fish and Wildlife to withdraw a water exchange application that would have allowed Nestlé to build a $50 million water bottling plant on the Columbia River Gorge. This was the result of steadfast activism of people over months and years. 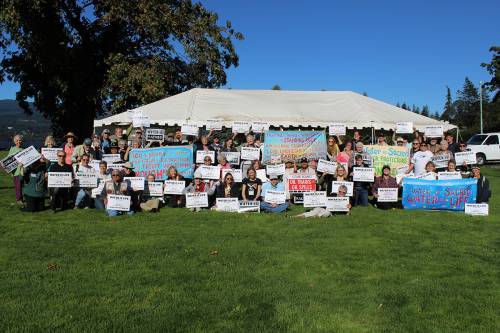 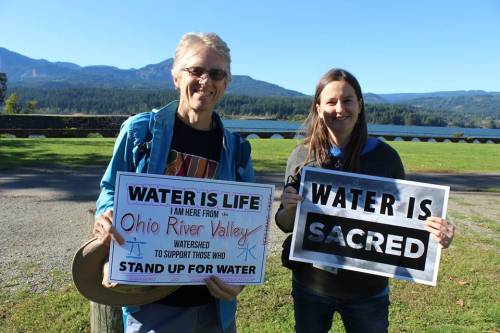 PHP staffers, Eileen Schuhmann and Andrew Kang Bartlett, at the Cascade Locks in the Columbia River Gorge joined with local Water Protectors for the vigil. Participants from around the country made signs naming the watersheds where we live. 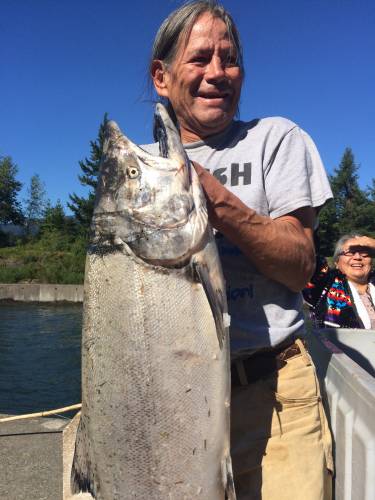 A man we met had just landed this enormous Chinook, or King, Salmon in his gill net. Salmon and the right to fish are critical to Native American communities along the river. Economically and culturally, salmon are king. This related article from Yes! magazine tells the stories of how Native Americans are writing their own food laws to protect their cultures and livelihoods. 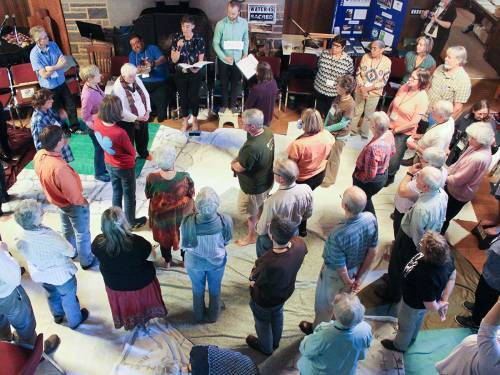 Nora Leccese with the PC(USA) Office of Public Witness, leads the Blanket Exercise on racism and the dispossession of land during the conference (Photo by Rick Jones)

The taking over of “discovered” land across North America is put into the frame of imperial ambitions in Birth of an Imperial Nation, an article from the Nation Magazine.  Gabriel Winant outlines the broad strokes of a new 19th-century history called A Nation Without Borders by New York University historian Steven Hahn. The book provides a historical framework for this early nation-building era.

“Hahn reminds us that our little postcolonial republic had imperial inclinations even at its birth. From its outset, the country was seeking to seize new lands and resources as well as to consolidate those territories it had already absorbed. That America’s economic and political origins can be found in its imperial expansion—first within the American continent and then abroad—is well-­established. But Hahn manages to do something new by showing how the Civil War and the struggle to abolish slavery from this country fits into this narrative as well.

Hahn identifies a parallel reconstruction in the West in the same moment. The federal government engaged in a bitter struggle with Native Americans, determining in 1871 that “no Indian nation or tribe within the territory of the United States shall be acknowledged or recognized as an independent nation.” Military triumph led to a policy of “detribalization,” the active effort to undo the remaining knots of indigenous culture—a culture described as “socialist” by federal officials. Federal pressure forced a similar process on the Mormons in Utah. Just as we “dissolve tribal relations of the Indians in order to make the Indian a good citizen,” said a Democratic congressman, “so we shatter the fabric of this church organization in order to make each member a free citizen of the Territory of Utah.”

Starkly contrasting this approach grounded in a Western, colonial mentality is the world view of many Native peoples. A conference participant, Karen Kudebeh, in her blog post reflected on Indigenous wisdom, which demonstrates a way of relating to ‘place’ that may be critically important to addressing the ecological crises we face.  I end with her words —

“…the indigenous perspective of Place, where the natural world is infused with significance, sentience and spirit; where every mountain in sight of your home has a story and you know your place in the center of things; where Mitakuya Oyasin – an acknowledgement of “All My Relations” is the way of greeting the whole community of life; the focus is on relationship, equity, respect, inclusion with all creation?   In contrast, Western perspective is dominated by a colonial/imperial mindset that puts humans at the top of a tree of life, separate and special, having power over all else.  As for the natural world? — just “resources” to be used by us humans.  (“You’ve seen one redwood tree, you’ve seen them all.”)  No sentience ascribed to God’s creation, save in human form.  What a set-up for a truncated existence, leading inevitably to an utterly devastated planet.

But also: what a challenge for a community of people who call themselves “Presbyterians for Earth Care!”  By incorporating deep wisdom shared by indigenous peoples, we can broaden our own worldviews and support one another in challenging the structures within our communities that enable the planet’s devastation to continue.

Who can we look to as a model for action?  Who else swims upstream in spite of impossible obstacles in order to return home to ensure the continuation of its own species and to give its body over to the whole community of life?

We can turn to the Spirit of Salmon for inspiration!   Although the instinct for self-preservation runs strong in both our lineages, it’s the salmon who knows that its gifts must be returned to its home river.  This is also the Hero’s Journey.  And for those of us in the dominant culture responsible for Earth’s unraveling, returning home with our gifts may be the only hope we have.

Presbyterians for Earth Care meet with Native Americans in the northwest