Last May, we sounded the alarm about what would be the first genetically engineered animal in the U.S. market – a hybrid salmon engineered from three different species. Now, it looks like production of these enormous fish in a facility in Indiana will move forward.

Click on the image to see a larger version.    Both salmon pictured are 18-months old. The genetically engineered salmon grows about twice and fast and at this size is ready for market.

Today, in a statement from the Food and Drug Administration (FDA) Commissioner Scott Gottlieb, M.D., reported that they were deactivating the import alert on such salmon.

The positive news is that such fish must be labeled according to the statement:  “…the law and regulations require that human food containing GE salmon bear labeling indicating that it is bioengineered.”

What goes on the label is unclear. The industry will, no doubt, attempt to make the label as small, obscure and reassuring as possible. We will hope that the label will be prominent and clear enough so shoppers will  be able to make an informed choice.

The concerning part is that we still don’t know if eating such fish is safe as no medium- or long-term studies have been done. Nevertheless, the FDA is sticking with their 2015 review saying, “this fish is safe to eat, the genetic construct added to the fish’s genome is safe for the animal, and the manufacturer’s claim that it reaches a growth marker important to the aquaculture industry more rapidly than its non-GE farm-raised Atlantic salmon counterpart is confirmed.”

According to the Center for Food Safety, the GE salmon are nutritionally inferior with fewer healthy oils and acids, vitamins, and less protein than wild salmon.

The approval of the GE salmon opens the door to other genetically engineered fish and shellfish, as well as chickens, cows, sheep, goats, rabbits and pigs that are reportedly in development.

[See analysis from Friends of the Earth: Genetically Engineered Fish: An Unnecessary Risk to the Environment, Public Health and Fishing Communities (PDF)]

There will no doubt be those who will oppose this decision. Dr. Pete Knutson, owner of Loki Fish Company and Commissioner on the Puget Sound Salmon Commission, says “There were over 250 million wild salmon harvested in Alaska and Puget Sound this year. Why should we put this sustainable resource at risk for the benefit of a few multinational corporations who will, sooner or later, introduce GE salmon into their floating feed lots? Americans will be eating synthetic salmon, thinking they are receiving the nutritional benefits of wild salmon.” 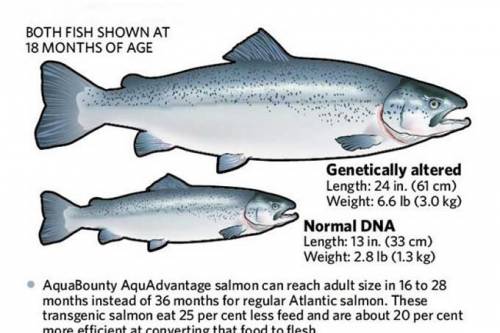 Here are the relevant sections of today’s FDA press release:

Biotechnology is a term used to describe certain methods, including genetic engineering (GE), that scientists use to introduce new, favorable traits or characteristics to an organism. Part of our work implementing the FDA’s vital mission is focused on evaluating the safety of intentional genomic alterations (IGAs) in animals that will ultimately be sold for consumption to American consumers. We recently advanced a comprehensive framework for the efficient development of safe biotechnology products with our new Plant and Animal Biotechnology Innovation Action Plan. In recent years, we’ve taken important steps to help advance novel products, including our 2015 decision to approve an application related to AquAdvantage Salmon, a GE Atlantic salmon that contains the first approved IGA in an animal intended for food use.

Today, we are taking another important step by deactivating a 2016 import alert that prevented GE salmon from entering the U.S. The FDA’s approval of the application related to AquAdvantage Salmon followed a comprehensive analysis of the scientific evidence, which determined that the GE Atlantic salmon met the statutory requirements for safety and effectiveness under the Federal Food, Drug, and Cosmetic Act. However, in 2016, Congress directed the FDA not to allow into commerce any food that contains GE salmon until it issued final labeling guidelines for informing consumers of the GE salmon content in the food. The FDA complied with this requirement by implementing an import alert in 2016 that prevented GE salmon from entering the U.S.

With Congress’ enactment of the National Bioengineered Food Disclosure Standard, the U.S. Department of Agriculture (USDA) was charged with implementing a mandatory standard for disclosing whether a food is “bioengineered” and FDA was divested of its authority over voluntary labeling to indicate the presence of GE content in human foods. The FDA no longer has the authority to issue labeling guidance on this topic; however, the FDA believes this Congressional mandate has been satisfied by the USDA’s issuance of final regulations implementing that law in late 2018 because the law and regulations require that human food containing GE salmon bear labeling indicating that it is bioengineered. Therefore, the FDA is deactivating the import alert that prevented food from AquAdvantage Salmon, including salmon eggs used to grow the fish, from entering the U.S.

With the deactivation of the import alert, AquAdvantage Salmon eggs can now be imported to the company’s contained grow-out facility in Indiana to be raised into salmon for food. As was determined during the FDA’s 2015 review, this fish is safe to eat, the genetic construct added to the fish’s genome is safe for the animal, and the manufacturer’s claim that it reaches a growth marker important to the aquaculture industry more rapidly than its non-GE farm-raised Atlantic salmon counterpart is confirmed.

Additionally, as part of its approval, the FDA also analyzed the potential environmental impact that an approval of the AquAdvantage Salmon application would have on the U.S. environment and published its final Environmental Assessment and Finding of No Significant Impact in November 2015. Based on the multiple forms of physical and biological environmental containment measures proposed by the company in its application, the FDA found that an approval of the application related to AquAdvantage Salmon would not cause a significant impact on the U.S. environment. Subsequently, the FDA found that multiple forms of containment proposed in the supplemental application to raise the salmon in the company’s Indiana facility also would have no significant impact on the environment.

This is what the FDA, in their words, exists to do:

The FDA, an agency within the U.S. Department of Health and Human Services, protects the public health by assuring the safety, effectiveness, and security of human and veterinary drugs, vaccines and other biological products for human use, and medical devices. The agency also is responsible for the safety and security of our nation’s food supply, cosmetics, dietary supplements, products that give off electronic radiation, and for regulating tobacco products.

Stay tuned for the reactions of food safety, environmental, and indigenous groups.