Building bridges instead of walls in Charlotte, North Carolina 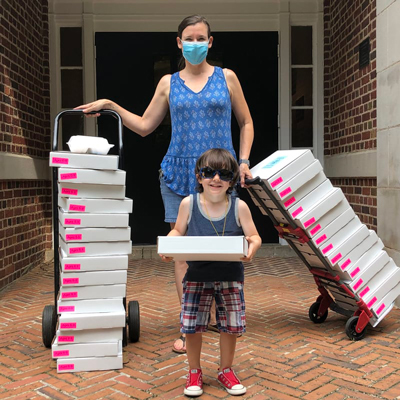 In early 2020, the dean of Belk Chapel at Queens University of Charlotte, Dr. Suzanne Watts Henderson, was in Chicago visiting with Eboo Patel. The founder and president of Interfaith Youth Core (IFYC) mentioned to her that he was interested in working with Queens to build a statewide and regional network to do interfaith work in the Carolinas.

Henderson, who’s been working with Patel’s organization, gave Queens a grant to develop a strategic plan for interfaith work — and had already invited Patel to campus in February 2020 to speak at Queens University’s Presbyterian & Pluralist week. During the celebration the university lifted up its Presbyterian and Pluralist Statement that came as a result of its interfaith visioning work and connects Queens’ core values of service, intellectual curiosity and doing good with its ties to the Presbyterian Church (U.S.A.), which date back to 1857.

While in Charlotte, Patel met with representatives from the Gambrell Foundation. The Gambrell family is historically Presbyterian, and the foundation was captivated by IFYC and Queens’ vision of doing interfaith work to strengthen the social fabric of the community.

With a $250,000 grant from the foundation, Queens and IFYC started Bridge Builders Charlotte to support projects that strengthen area nonprofit responses to COVID-19 needs through interfaith engagement. Already six university and colleges in the area — three are historically Presbyterian — are involved in the initiative. Wingate University and the University of North Carolina at Charlotte have launched the first project. Their Bridge Builder campus advisers and student interns spent much of the summer creating 1,000 Interfaith Activity Boxes for area nonprofits that are supporting families dealing with learning loss due to the closing of public school buildings.

“It’s a way to expose children at young ages to a range of religious traditions and world views,” Henderson said, “in ways that are respectful of religious differences.”

The Interfaith Activity Boxes project also has a training component to equip the nonprofit organizations with the knowledge and skills to engage the diverse religious identities of both volunteers and those they serve.

Queens is working on a project to develop an interfaith component for an area secular nonprofit to serve people with coronavirus-related food security issues. Central Piedmont Community College is engaged in a similar project with a traditionally Christian nonprofit organization.

“Bridge Builders grows out of the view that our community is stronger when we reach across religious and worldview difference to claim our shared commitment to human flourishing,” Henderson said.

In the hope of expanding the interfaith work in North Carolina and South Carolina, Henderson is now working on acquiring funding for Bridge Builders Carolinas. She said she believes this kind of interfaith engagement can help lay the groundwork for people to work through their many differences.

“Our approach to social issues such as racial justice, gender identity or immigration status is often grounded in core religious or secular values,” she said. “We can disagree on important matters of doctrine and creed and still find common ground, for instance, in Muslim, Jewish, Buddhist and Christian visions for a just society.”

An ordained minister and New Testament scholar, Henderson sees this moment as an opportunity for Christians and people of many different views to ask whether we are called to build walls or build bridges. She believes the bridge-building work of interfaith engagement work is the key to rebuilding society.

“I’m taking the long view. My students give me such hope,” she said.

“Many have never encountered people of other faith traditions and are frankly quite wary at first,” she said.

“But their apprehension gives way quickly to joy as they find inspiration in others’ beliefs and practices. Perhaps surprisingly, this discovery leads them to grow in their own faith, to reflect more deeply on their own core values, where they come from and how those values will shape their adult lives.”

Johnson C. Smith University, Davidson College and Queens University are members of the Association of Presbyterian Colleges and Universities (APCU).

Holy Jesus, empower us to both proclaim and embody your gospel. Amen.