People are seeking to serve 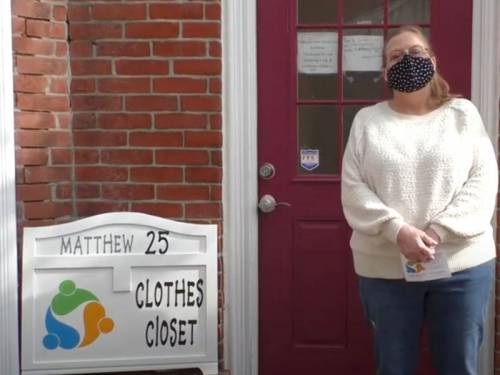 One of the things that attracted the Rev. Daniel Van Beek to Franklin Presbyterian Church was its commitment to Matthew 25. “Their pastor had left, and the interim hadn’t even come, yet they still moved forward with Matthew 25,” said Van Beek, who joined the Franklin, Kentucky, congregation in 2020.

While engaging in all three Matthew 25 focuses — building congregational vitality, dismantling structural racism and eradicating systemic poverty — it is the church’s work in the latter that has garnered attention.

Franklin, named one of the 50 best small Southern cities, is not without its challenges. Many families, says Van Beek, struggle with Jesus’ Matthew 25 saying, “I was naked and you clothed me.” Aware of this, Franklin Presbyterian began a clothes closet in its basement. Clothing donations came pouring in, and soon, Van Beek says, there was no room to move.

“We are not here to promote the church’s name, but to make known what we stand for,” said Van Beek. Now that the clothing ministry is up and running, the Matthew 25 team can explore what’s next.

That exploration is at the heart of Franklin Presbyterian’s mission. So much so that when a gift was left to the church, it was decided to invest the money in a new staff position. “We didn’t want that money for hospice care,” said Van Beek.

In 2021, the Rev. Bailey Pickens joined the congregation as its new community connections director. Pickens sees her role as “connecting the dots” within the community. Many of these dots get connected by nurturing conversations.

One of the places such conversations are held is within the church. In 2014, an addition was built onto the sanctuary. It is viewed as a space for the community. “We’re using the resources we have to listen,” said Pickens.

Through its anti-racism and poverty work, Franklin Presbyterian has also discovered what a vital congregation is.

“It is where everyone is doing the ministry,” said Pickens. It is also where people want to be part of the mission.

This past winter, the congregation welcomed 10 new members — many of whom joined because of the work being done in the community, Van Beek says.

Gracious God, you give strength to the weary and power to the faint. Lift up those who have given so much. May they know the peace of Christ, the peace that surpasses all human understanding. In your gracious name we pray. Amen.