Minute for Mission: Self-Development of People

Baltimore based United Workers Association (UWA) is a human rights organization led by low-wage workers fighting to secure human rights for all—including freedom from poverty. Baltimore’s Inner Harbor has an area of great economic wealth and prosperity due to tourism, but it is surrounded by severe poverty throughout the inner city.  The businesses in and around the Harbor employ workers whose wages   have been systematically kept low and their working conditions, poor.

With a $20,000 grant from the National Self-Development of People, the 500+ low-wage worker’s organization initiated a project focused on raising the minimum wage of day laborers and to change the perception that day laborers are lazy, drug addicted, or panhandlers. The primary goal of this project is to improve working conditions through organizing and education. 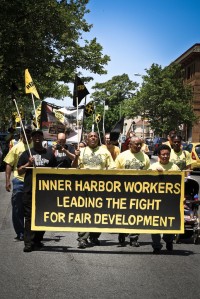 The Baltimore Presbytery SDOP Committee previously provided $14,000 to The Human Rights Zone project of Inner Harbor-United Workers.  The workers have conducted training through street theater during which new members have been recruited and leaders identified.  Their street theater topics included Freedom from Poverty, Right to Work with Dignity, and Health Care and Education.  A major part of their organizing was directed toward their march to the Inner Harbor.

UWA victories include an increase in wages from below the minimum wage at the time to $13 an hour. Workers took the lead in organizing with their fellow workers to secure a union contract. A theme of the project is “everyone is worthy of dignity and respect.”

The Presbytery of Baltimore and the Presbyterian Church (U.S.A.) have been strong supporters of organizing by the UWA and of the Fair Development overture that passed with strong support at the PC(USA)’s 200th General Assembly in Pittsburgh in 2012.

The Fair Development Campaign connects Presbyterians with the United Workers Association of Baltimore in holding developers that have benefited from public funds, subsidies and tax incentives accountable to the community for providing jobs at living wages and other human rights.

Gracious God, we pray for communities where there are poverty and injustice, and we pray for the oppressed and the disadvantaged that they may find help in their time of need. We ask that you help us in extending compassion and justice to all those in need. In the name of Jesus Christ. Amen.