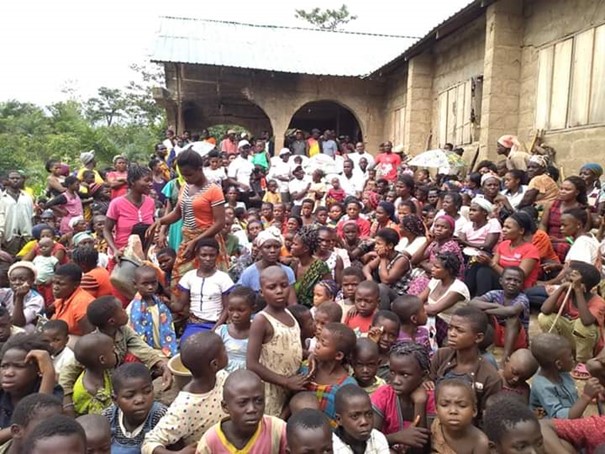 Refugees from the North West and South West regions of Cameroon in Nigeria. Photo by the Ayah Foundation.

On the 24th of February 2022, the Russian military invaded Ukraine generating an international outcry and concern for the atrocities and sufferings inflicted on the civilian population. Millions of people have been leaving Ukrainian towns and cities to neighbor countries in Europe such as Poland, Hungary, Moldova, Slovakia, and Romania. As an international peacemaker and social justice campaigner, I am sad and angry to be witness to yet another episode of human cruelty.

For over two decades, RELUFA, the Joining Hands network in Cameroon that I coordinate, has been fighting the systemic causes of hunger and poverty in Cameroon. War is certainly a root cause of hunger and poverty. War impacts the economic development of generations of people. Productive citizens abandon their homes, farms, and livelihoods, becoming refugees and internally displaced persons. They must rebuild their lives from nothing, and children often miss years of schooling which has a tremendous impact on their development and future economic well-being.

Since the Russian invasion of Ukraine, I have been advocating for an end to the war much in the same way that I have been campaigning against the war in the North West and South West Anglophone Regions of Cameroon for the past 5 years. The difference between the war in Cameroon and the war in Ukraine is that Ukraine is a sovereign country that has been invaded by another sovereign country, and the war in Cameroon is an internal conflict where the Cameroonian national army is fighting against a segment of its own population. However, the similarity between the two conflicts is that there have been extensive civilian casualties as a result of both wars.

It is my conviction that all wars are unjustifiable because they result in civilian casualties and other forms of hardship in particular for women, children, and the elderly. In the first month of the invasion of Ukraine, more than 3 million refugees fled the country. Interestingly, these refugees mostly received a generous welcome into European host countries, while refugees fleeing war in Africa and the Middle East have been met with racist and xenophobic rhetoric about refugees and migrants.

The European Union’s Temporary Protection Directive, which allows for the temporary protection of displaced people arriving from countries outside the EU, has been triggered in record time, which provides Ukrainians with immediate protection and legal status to work and access social services within EU member countries.  I personally applaud this humane treatment of people fleeing war. Paradoxically, the Anglophone crisis in Cameroon has not witnessed the same mobilization of attention, good will, and resources. Nigeria is the closest neighboring country where Cameroonian refugees are settled in refugee camps. Others have fled to Francophone Regions in Cameroon where they live as internally displaced persons. Others have attempted to flee to countries like Ghana, United Kingdom, Germany, and the United States of America, etc.

Cameroonians fleeing the Anglophone crisis to the United States have not experienced the same welcome as Ukrainian refugees in the EU. Between 2019 and 2021, more than 80 Cameroonian asylum seekers were deported from the United States back to Cameroon where their lives were at threat. Human Rights Watch published a report on February 10, 2022, documenting that Cameroonian returnees suffered serious human rights violations on returning home including torture, rape, and disappearance. Finally, after 5 long years of conflict, the U.S. has granted Cameroonian asylum seekers temporary protected status for 18 months if they were already residing in the U.S. as of April 14, 2022.

As of today, over 700,000 people are internally displaced, 3,200 schools are non-functional, and more than 3.9 million people need humanitarian assistance as a result of the war in the Anglophone regions of Cameroon. Some humanitarian agencies have tried to provide support to Cameroonian refugees and internally displaced people, but the needs of those affected outweigh the available resources. And now that food prices are spiking in part due to the Russian invasion of Ukraine, many more Cameroonians will need humanitarian assistance. Cameroon is a net importer of wheat, and the Russian war with Ukraine has led to a 40% increase in the price of bread there. This food price crisis will further complicate the lives of internally displaced people and other people affected by the war in the Anglophone Regions of Cameroon.

Europe and the United States have taken positions in opposition to the Russian invasion of Ukraine that have been clearly articulated and openly expressed. But the Anglophone crisis in Cameroon has received unequal attention. As a keen observer and campaigner for social justice, I must ask why there has been limited international attention to the war in Cameroon. The war has lasted 5 years, and a unified, clear, and strong position has not been taken by Europe or the United States against the atrocities committed there. I hold the firm conviction that all wars are unjustifiable and should never be initiated in the first place. All human beings are impacted in the same ways by the violence irrespective of origin, color, or creed. All victims of war deserve our equal concern and support.