Yolanda Zurita (front, center left in blue shirt) and other representatives of the National Platform of Communities Affected by Toxic Metals meet in the government palace with Primer Minister Mirtha Vasquez (front, center in orange jacket). Photo by Milushka Rojas.

Inside the government palace, sitting at the opposite end of the conference table from Prime Minister Mirtha Vasquez, Yolando Zurita, representing communities affected by toxic metal poisoning in Peru, posed the question, ‘Why not ease our suffering by implementing our dream – a comprehensive and integrated health care plan in this country? ¨

The dream that Yolanda speaks is one that has been building for over ten years and is nearing the point of its long-awaited implementation. The suffering that she laments has been endured for so much longer.

For over twenty years, Yolanda Zurita has fought alongside her fellow citizens of La Oroya, Peru for relief from the millions of pounds of toxins that were dumped upon the city day after day over the course of decades by a metallurgical smelter once owned by a US based holding company. Often considered one of the ten most contaminated places in the world, various studies demonstrated extreme blood-lead levels in the vast majority of the children in La Oroya, including newborn infants who were shown to have lead in their bodies upon birth. 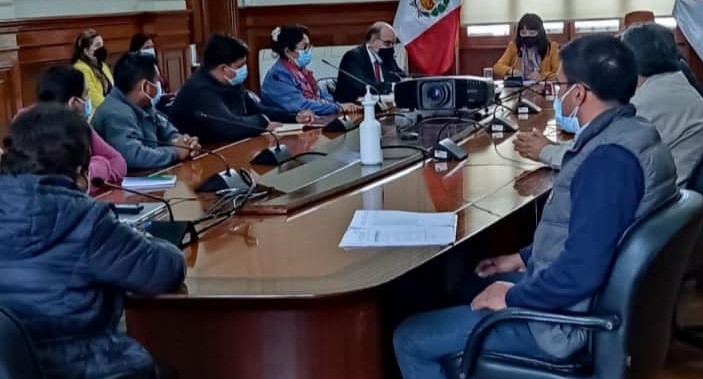 Sitting at opposite ends of the conference table, Yolanda Zurita expresses to Prime Minister Mirtha Vasquez the dream of a comprehensive environmental health care program to address the impacts of heavy metals contamination. Photo by Milushka Rojas.

PC(USA) global partner Red Uniendo Manos Peru joined with Yolanda and others from La Oroya twenty years ago to advocate for the enforcement of adequate environmental measures in the town of La Oroya. When the US based company failed to comply with such measures and international outrage mounted, the company eventually lost its operating license, filed for bankruptcy, and shut down operations in 2009. But that was not the end of the story, nor the suffering.

The massive contamination over the course of decades had left nearly one thousand square miles of land contaminated with lead, arsenic, cadmium, and mercury. Children and other vulnerable populations continued to be exposed to toxic metals, and the Mantaro river that runs through La Oroya continued to show no signs of life. In the meantime, the health facilities in Peru had never developed the specialized care needed to address the cocktail of poisons affecting the bodies of those living in La Oroya and surrounding areas in a myriad of ways. It became clear that further intervention from the State would be necessary to restore abundant life in the town, and thus a dream was born.

With the technical support and organizing capacity of Red Uniendo Manos Peru and the accompaniment of Presbyterians from the US, Yolanda Zurita helped form the Regional Platform for Human and Environmental Health in Junin (the region in which La Oroya is situated). With community leaders from surrounding areas, they authored and advocated for a bill that would mandate the regional government to establish specialized health care, clean up environmental degradation and enforce more adequate environmental protections. The bill was unanimously passed in 2012 by the regional government, but the hard work of designing and then implementing such a plan had only begun. After another five years of continual negotiating with the regional government, a multi-sector and comprehensive plan was designed.

The National Platform of Communities Affected by Toxic Metals holds a press conference to demand dialogue with the federal government about the creation of a comprehensive environmental health care program to address the impacts from mining contamination experienced in communities across Peru. Photo by Jed Koball.

In explaining the purpose of such a design, Yolanda explains, ¨The effects of contamination or exposure to heavy metals cannot be treated in a sporadic, person by person or solely medical way.  Effective response requires permanent care throughout the course of life not only of the person but of the territories in which they live. For that, social, economic, and environmental sustainability must be achieved. It is difficult to guarantee good health as long as the sources of contamination remain in contact with the population. Without the availability of safe water, without farmland, without the cleaning up of pollutants, without food security, without social policies, etc., we cannot achieve good health and well-being. All of these factors cannot be managed by the Ministry of Health alone. We need the commitment of other ministries, and this is why we speak of a Multisectoral Plan. ¨

Yet, despite such hard work and clear logic, it appeared that all those years of advocacy and negotiating were for naught when the Regional Government ultimately said that it could not implement the plan without necessary policy changes and authorization from the national government.

Undeterred, the dream did not die. It expanded! Certainly, La Oroya was not the only place in Peru affected by toxic metals from mining activity. Certainly, it was not the only community fighting for its right to clean air, soil and water and proper health care. And so, in 2017, with the support and guidance of the Red Uniendo Manos Peru, Yolanda reached out to other communities around Peru affected by toxic metals from the mining industry. Together they formed the National Platform of Communities Affected by Toxic Metals and began advocating for space to converse and negotiate with federal authorities. 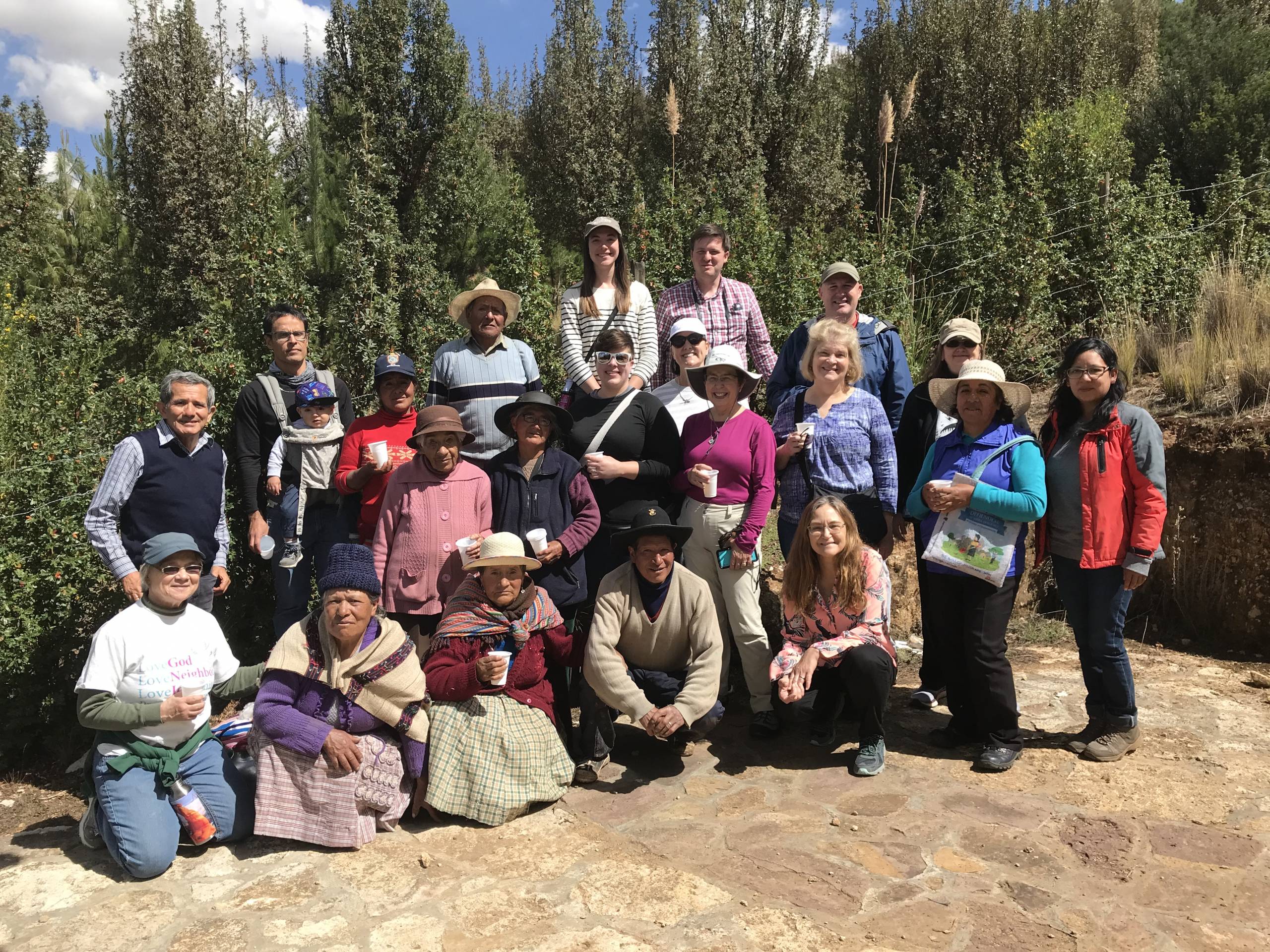 On the outskirts of La Oroya proper, Yolanda Zolita (front right in blue vest) gathers with local community members and representatives of Giddings-Lovejoy Presbytery from Missouri who have accompanied the people of La Oroya for twenty years and have been advocating for corporate responsibility of US mining companies and the reform of foreign trade policy that often favors mining companies over the health of local communities. Photo courtesy of Jed Koball.

Such an endeavor was nothing short of daunting given the power of the mining industry in Peru. Mining accounts for nearly 2/3 of export dollars in Peru, effectively serving as the backbone of the economy. Indeed, Peru is considered one of the most mining friendly countries in the world and has among the highest potential values for gold, copper, silver, and a host of other minerals. Yet, the precise demands for needed health care and related environmental measures made by the National Platform under the leadership of Yolanda and evidenced by more than 4000 environmental liabilities related to mining contamination in Peru that have left more than 10 million people (1/3 of the population of Peru) at risk for toxic metals poisoning, convinced the government to open a multisector space for dialogue.

After four years of such dialogue, in June of 2021, a federal law modeled after the law in the Region of Junin was passed to establish a comprehensive plan for specialized human and environmental health care for communities affected by toxic metal poisoning in Peru. In the negotiating of this law, it was the very first time that a resident of La Oroya had sat face to face with the highest authorities of government to talk about the impacts of the generations of contamination they have faced, and it was the first time that the government took action to respond to the overwhelming costs of mining activity in the country. Since June of this year, the National Platform has worked closely with a multisector group representing 12 ministries of government to design such a plan. The model for the plan was also taken from the plan designed for the region of Junin. 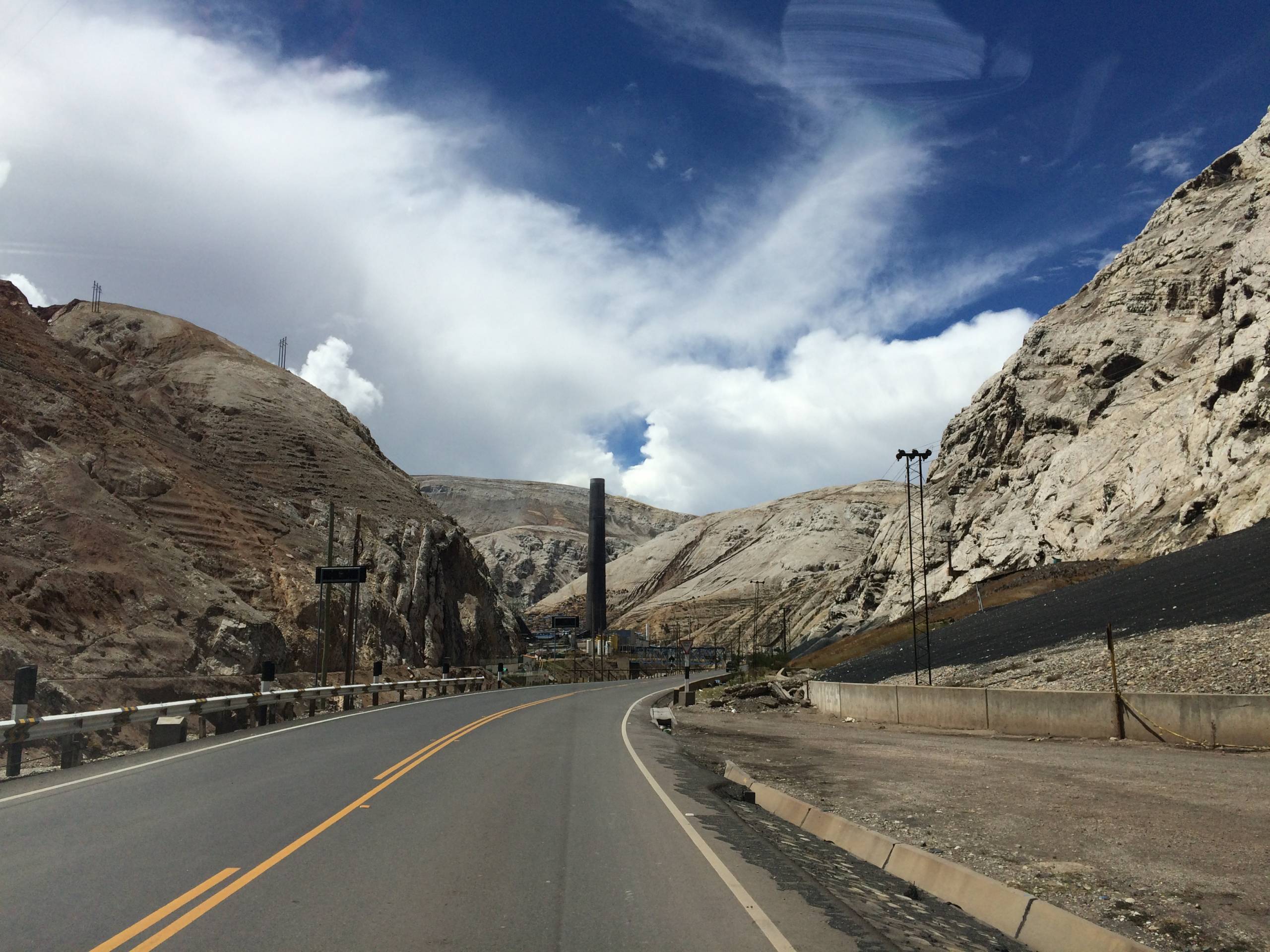 La Oroya, Peru is often considered one of the ten most contaminated places in the world due to decades of heavy metal toxins spewed upon the town by a metallurgical complex once owned by a US holding company. Photo by Jed Koball.

Today, the health plan in question awaits final approval from the President of Peru, Pedro Castillo, and his cabinet, which is led by Prime Minister Mirtha Vasquez. In a meeting with Yolanda and other representatives of the National Platform, Prime Minister Vasquez received the plan, noting that for far too long the Peruvian government has given preference to the economic gains of the mining industry without paying any attention to the cost of life that it generates. In response to Yolanda´s question, the Prime Minister stated, ¨For me, it is very important that we approve this plan that will be a fundamental instrument in helping address a problem that we have ignored for decades.¨ Sitting by the Prime Minister´s side, the Minister of Environment, Mariano Castro Sánchez-Morena, added his support noting that the plan is in its final steps of being approved by the cabinet and that it fits squarely within the political agenda of the current administration.

As the National Platform, the people of La Oroya and so many others who live at risk of toxic metals contamination await the final approval to implement a life-changing plan, may we all be inspired and transformed by the wisdom, intelligence, creativity, vision, and perseverance of leaders like Yolanda. She is showing us the way forward – the way to change oppressive systems, to change an apathetic society, to change our corrupt world. From the margins, she can see so very clearly how interconnected the world is and how collaborative we must become to end the oppression. That´s what this environmental health plan is about, and it is what we must be about. To walk alongside Yolanda for the past decade is nothing less than a privilege. It has given me great hope. She