FONDAMA is committed to the long road to justice 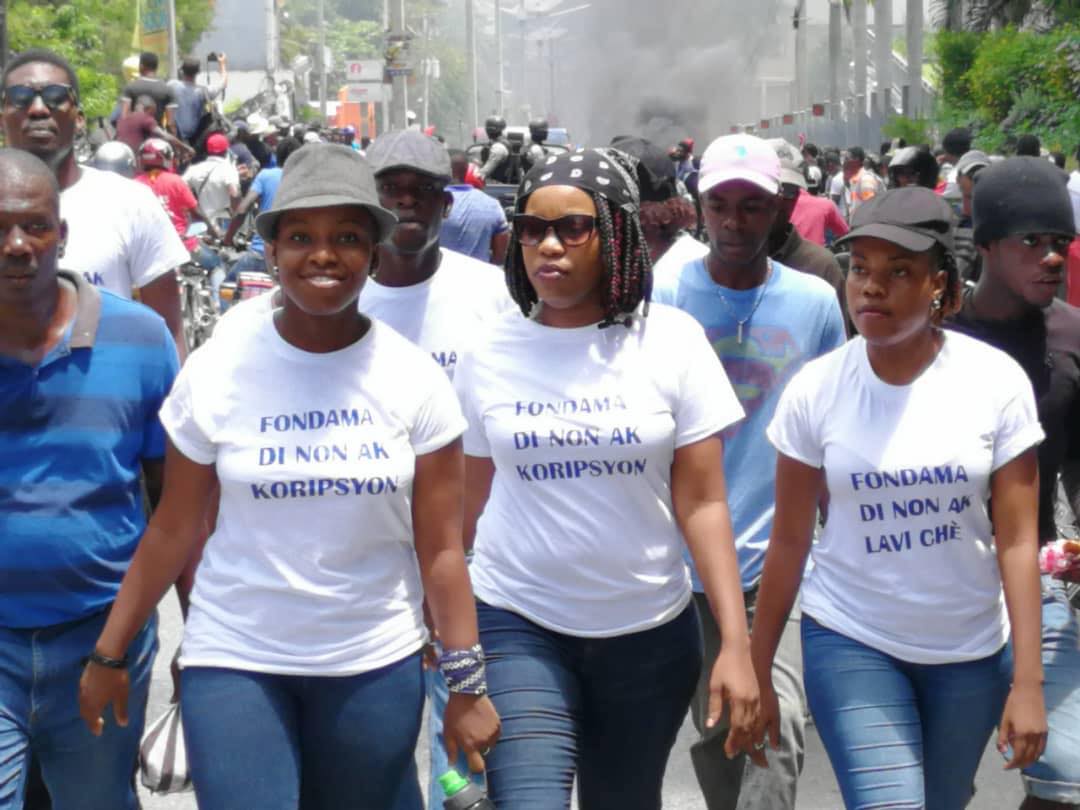 Fondama and other organizations protesting against Hunger and corruption. Fabienne Jean is pictured in the center. Photo credit Lavady Jean.

In my country, Haiti, hunger, poverty and deprivation destroy the dignity of more than 70% of the population. People are reduced to spending all their lives in one and only quest – the quest for survival. Coming from this background, very early in my life, I encountered the most abject poverty and knew that I did not want this life for myself or my family. I would never have suspected that my involvement in the fight against hunger and poverty would go beyond my personal framework to become a collective national battle.

In October 2009, I joined the staff of the Mouvement Paysan Papaye (MPP) as the administrative assistant. MPP is one of the largest organizations defending peasants’ rights in Haiti and is the founding member of the Joining Hands network “Hands Together Foundation of Haiti” FONDAMA. My work initially was limited to administrative and logistical support and allowed me to earn a living and support my family. However, I was about to begin the most extraordinary adventure of my life – a struggle for a more just society.

Haiti has a lot of non-profits and non-governmental organizations trying to solve various problems that impact the socio-economic stability of the country and the rights of every person. It is unclear exactly how much money and resources have been invested in Haiti to promote sustainable development, and it is difficult to know what progress has been made. Rather than allowing Haitians to lead development in line with their own cultural models and according to their specific needs, a lot of international actors tend to impose their own experiences and vision of development.

FONDAMA was created in 2009 not to extend the already exhaustive list of organizations and institutions present in the country, but to counterbalance this trend away from Haitian led development. FONDAMA works with Haitians to analyze the root causes of challenges faced by the population and find solutions that will lead to sustainable development at the national level as well as build the capacities of the people on the local level. FONDAMA’s priority has been to fight alongside the peasants for arable land and the conditions necessary for the production of healthy foods to reduce hunger in the country. 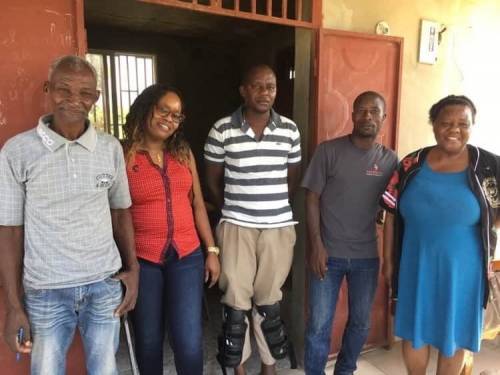 Fabienne Jean, second from left, after a meeting with leaders of the ODEPOL — Organization for Environmental Development of Leogane: Boston Jean-Gilles, and Yvette Michaud, Vice President of the National Congress Movement of Papay. Photo Credit Cindy Corell.

Right at the time that FONDAMA was created, one of the biggest threats to food sovereignty and access to arable land was the Jatropha Foundation. The Jatropha Foundation was a group created at the request of the Bush administration in the U.S. with Brazil and Haiti. The goal was to reduce U.S. reliance on oil by 20 percent and substitute agro-fuel in its place. In Haiti, the government started grabbing land from Haitian peasants to make way for jatropha plantations. Jatropha is a non-edible bush that’s fruit can be used to produce agro-fuel.

The message that was being communicated widely was that Jatropha, a poisonous plant, was actually a miracle plant that could change the living conditions of the population. As a result, a lot of food production was abandoned for the production of fuel for cars, but not Haitian cars, cars in the U.S. This was one of the vilest of injustices.

In response, FONDAMA started an awareness raising and mobilization campaign against the production of jatropha in Haiti and gained our first win as a network. FONDAMA member organizations and allies carried out various actions — including 5,000 peasants marching on Parliament, which led to the rejection of the jatropha production law that was up for a vote.

After the earthquake of January 12, 2010, FONDAMA, thanks to its partners, distributed tons of native seeds across the country in order to support peasant agriculture and protect the environment and health.

It was at this point that Monsanto decided to donate more than 450 tons of hybrid seeds to the Haitian government through USAID. The MPP, as well as other member organizations of FONDAMA and allies organized a big demonstration and burned some of the donated GMO seeds and distributed local organic seeds to about 20,000 farmers. Fortunately, Monsanto decided not to send the full “gift” which would have undercut the local seed market and created dependence on foreign agricultural inputs for peasants.

FONDAMA’s work is complex and difficult in a country where corruption is institutionalized, poverty and hunger are persistent, and there are no systems in place to measure progress. However, working with FONDAMA as network coordinator since 2016 has enabled me to better understand the problems of my country and how to approach them within the Haitian context. I’ve also learned to improve myself every day in order to become a better human being.

Above all, I have learned to appreciate each small step, whether it is a farmer who manages to have a good harvest despite the unpredictability of climate change, or the growing  awareness  of the negative impacts of the massive importation of food products on an economy like Haiti’s.

Today, coordinating the activities of FONDAMA is no longer a job for me. It has become a way of life that forces me constantly to push my limits. It has led me to return to university to earn a master’s degree in the applied arts of community development.

FONDAMA believes that citizens should understand and be empowered to defend their rights. This is why FONDAMA fights on the side of the most disadvantaged: listening to them, training them, mobilizing them, raising their awareness, empowering them and bringing a glimmer of hope. This is by far the greatest success of FONDAMA.

Supporting citizens and valuing their opinions is the first step towards building a more just and equitable future. Little by little, a number of organizations and institutions wish to integrate or fight alongside FONDAMA because throughout its existence it has never ceased to demonstrate how important it is to act jointly on the root causes of hunger and poverty.

This experience has transformed me in many ways, but above all, it has made me realize that the “easy” solution of offering bread and water to the hungry and thirsty to allay their immediate needs doesn’t solve the problem and that a radical solution is needed. This endeavor requires iron will, patience and a constant struggle, because the machine that generates these two scourges has more than 95 percent of the country’s resources, political power and support from foreign powers.