In a context where Haiti is becoming more dependent on food imports, and smallholder farmers are being displaced from land as it is being sold to large corporations, the FONDAMA network is working to “restore the Haitian environment toward food sovereignty and sustainability.” FONDAMA wants to secure food sovereignty through the promotion of family and cooperative agriculture, an agriculture that is organic and respectful of the environment so that the rights of future generations may be protected. 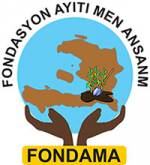 The Peasant Movement of Papay and Service Chretien d’Haiti organized two consultations in the first half of 2009. The consultations recommended that a deeper understanding of the systemic causes of poverty in Haiti was needed, and that organizations should come together to work in addressing them. The result was the constitution of a Joining Hands network for a new approach to anti-hunger ministry in Haiti. In June 2009, the network was formalized under the name of FONDAMA for “Fondasyon Men-lan-Men Ayiti” or “Foundation Hands in Hands Haiti.”

In 1980, Haiti was growing enough food to feed itself. During the 1990s, after trade liberalization in Haiti, the U.S. began dumping its heavily subsidized rice on Haitian markets and essentially destroyed local rice production. 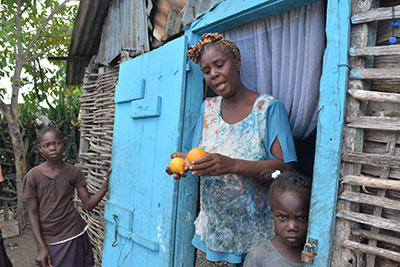 Madame St. Pierre talks about the high cost of oranges at the local market after her family’s gardens and fruit trees were destroyed by Agritrans S.A., a Haitian corporation that took property from 800 farm families near Trou du Nord in late summer 2013. The St. Pierre home was destroyed within weeks of this photo taken in February 2014. Photo by Cindy Corell.

Haiti is one of the countries the most vulnerable to severe weather events. And as disasters have taken place, foreign food aid has impacted the ability of smallholder farmers to sell their crops and created more dependence on foreign food imports.

After the 2010 earthquake that killed more than 250,000, displaced millions and destroyed much of the capital city of Port-au-Prince, the Haitian government declared that “Haiti is open for business” and set in motion aggressive land-grabbing actions.

Arable land in the country continues to be at risk of being taken over by private companies — both local and international. Land-grabbing evicts farmers from their land and steals their homes and livelihoods. In many cases, the farm families have occupied the land for many years, but powerful entities displace them to sell the land. 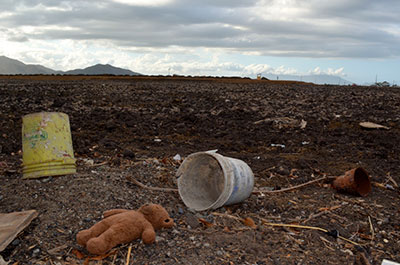 A child’s toy lies abandoned at the edge of property taken by Agritrans S.A., a Haitian corporation that took property of 800 farm families near Trou du Nord in late summer 2013. Photo by Cindy Corell.

Without land security, many of the farmers leave Haiti, emigrating to South America or the Dominican Republic. The land in turn, rather than producing food for Haitians, is used for large-scale production of crops for export, industrial parks, or other tourism or financial projects with no benefits for local communities.

By the end of 2019, more than half of Haitians were chronically food insecure due to extreme poverty and frequent natural disasters.

The primary impediments to progress for rural families — the root causes of the country’s poverty — are land-grabbing, effects of climate change, food imports and government corruption.

The primary campaign for FONDAMA is to fight for the protection of farmers’ lands, and to ensure that farmers are equipped to produce enough food to feed the country.

FONDAMA trains its network members to understand land rights and provide the peasants with tools to resist loss of property. FONDAMA partners with other organizations in the country to raise awareness and help people learn about the dangers of land-grabbing.