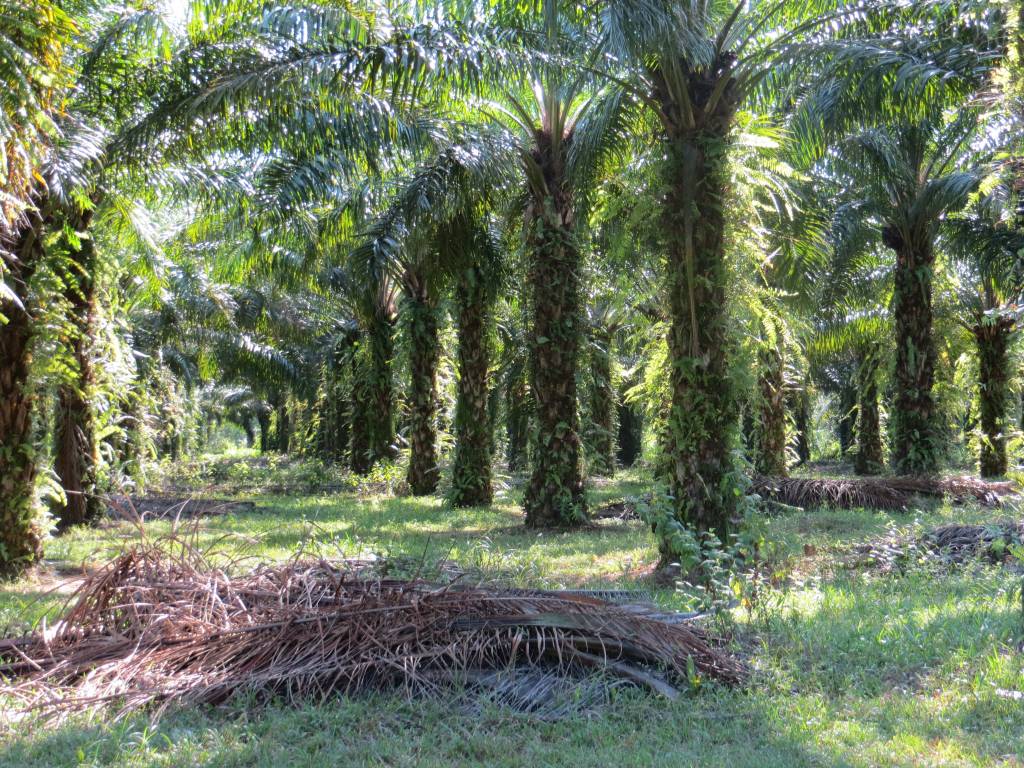 An oil palm plantation in Honduras. Photo by Eileen Schuhmann.

This is what I saw when I traveled to Honduras in 2013, massive oil palm plantations had taken over much of the landscape.

Usually, when we think of planting trees, we think of it as a good thing – good for the environment. But in the case of oil palm trees, the trend is to deforest old growth rainforest to plant oil palm trees to produce palm oil for export.

Indonesia’s rainforests are the largest expanse of rainforest in all of Asia and contain more than 3,000 animal species, many of which are endangered. 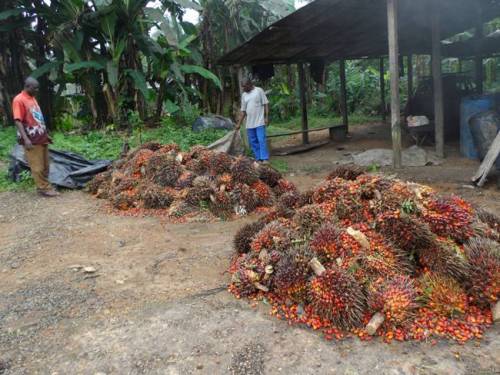 Officials estimate that 80 percent of the fires in Indonesia were set to clear land to make way for oil palm plantations. Indonesia supplies 56 percent of palm oil stocks globally.

The European Union accounts for almost half of the global imports of palm oil, and 74 percent of its supply comes from Malaysia and Indonesia, and 45 percent of its palm oil is used for biodiesel.

The deforestation and fires in Indonesia are a huge driver of climate change. According to the Rainforest Action Network, “Five per cent of all global greenhouse gas emissions are now coming from Indonesia, which is more than the combined emissions from driving all the millions of cars, trucks, trains, and buses in the U.S. each year combined.”

Global demand for palm oil is a large driver of land grabbing worldwide. Palm oil is the most widely used vegetable oil. As a flex crop, palm oil has versatility in its uses. It can be utilized as a biofuel and is an ingredient in many food, cleaning, beauty and personal care products.

In 2014, Indonesia produced 32.5 million tons of crude palm oil, generating $18.6 billion. Due to the economic interests associated with palm oil, the Indonesian government has sought to expand production, which involves taking over more and more land for investment in oil palm plantations.

According to the Presbyterian Hunger Program’s (PHP) Land Grab Fact Sheet, “Land grabbing is the large-scale purchase or lease of land, mostly in developing countries,  by large foreign  and domestic investors as well as governments in which the land and its interconnected resources—soil, water, metals, minerals, fossil fuels and forests —are transferred from the control, use and protection of local communities, primarily without their informed consent, to external investors.” 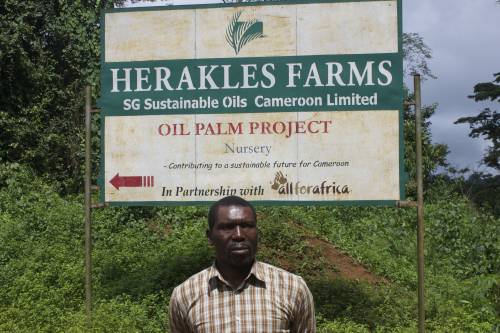 Nasako Besingi, a human rights defender in Cameroon, experienced violent threats and was imprisoned for his advocacy work on the injustices of the Herakles Farms land grab.

Rural communities in Indonesia are being displaced from their customary lands and losing access to the forests. Farmers who were once able to secure their needs from the land are now obliged to work as mere laborers on the plantations if they can find work. These investments, in many cases, have increased poverty and stripped poor rural communities of their most important resource – land.

In September 2009, Sithe Global Sustainable Oils Cameroon (SGSOC), a local subsidiary of the former American company Herakles Farms, signed a contract with the Cameroonian government for the establishment of a large palm oil plantation and refinery. The initial land agreement between SGSOC and the State of Cameroon granted 73,086 hectares of land (about 282 square miles) to the company in the South Western region of Cameroon for a 99-year lease period.

The project posed huge risks for biodiversity and subsistence agriculture in the region. It was expected to impact the lives and livelihoods of up to 45,000 residents.

Following sustained advocacy campaigns by RELUFA and other civil society organizations, the President of Cameroon revised the land agreement on November 25, 2013, reducing the SGSOC land concession area to 19,743 hectares (about 76 square miles) for a 3-year renewable provisionary concession period.

In Mbonjo village in the Littoral Region of Cameroon, 300 residents were forced from their homes in 1990 to make room for the SOCAPALM palm oil plantation. SOCAPALM is owned and operated by the French Bollore Group and Belgium SOCFIN Group. It received a concession from the government of Cameroon for 13,500 hectares (52 square miles) of land. The residents of Mbonjo village are currently fighting to restore their land rights while SOCAPALM continues to expand its production.

Foreign investors are expanding palm oil production to Cameroon and other countries in central and west Africa as land becomes harder to come by in Malaysia and Indonesia. 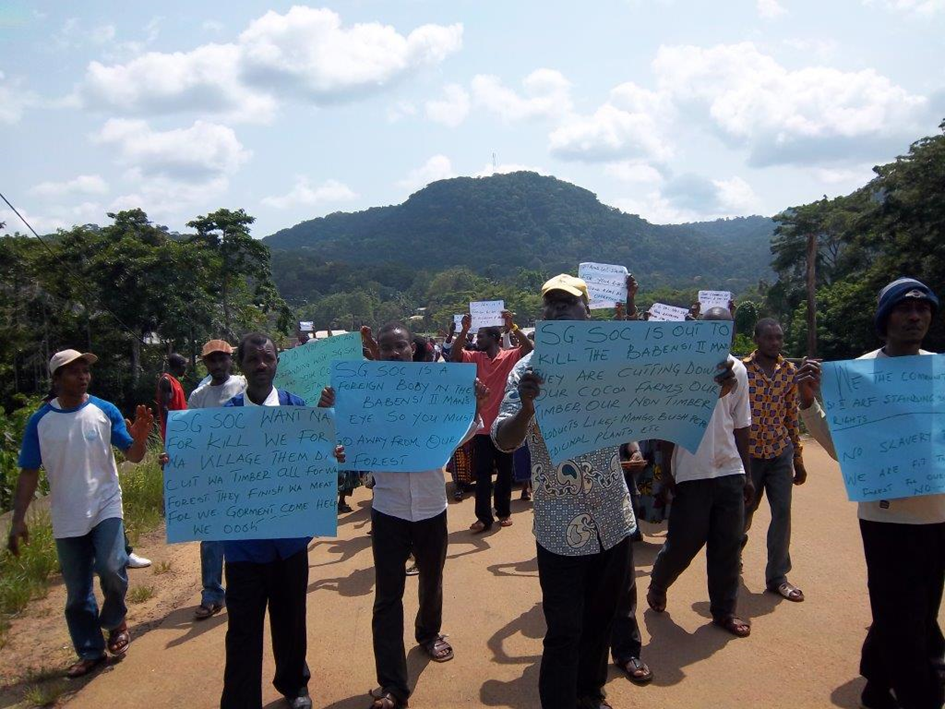 According to PHP’s partner Oakland Institute, “Local people are told that this kind of foreign direct investment in their farmland will bring development, jobs and modernise agriculture. They tend not to be informed about what is at stake – their farmland, water resources, environment, biodiversity, food security and sovereignty.”

And governments seem more than willing to sacrifice their land and citizens to corporations with goals of profit accumulation at any cost and by any means.

The World Bank and other international finance institutions have contributed to the expansion of oil palm plantations globally. According to Rainforest Rescue, “The World Bank has invested US$2 billion in palm oil cultivation and use since 1965, at least half of it in Indonesia and Malaysia.”

The expansion of the palm oil industry globally has led to growing criticism for the industry due to the environmental problems and social conflicts that it generates. This criticism has led the industry to move towards what it calls “Sustainable Palm Oil,” establishing a voluntary certification scheme – the Roundtable for Sustainable Palm Oil (RSPO). But the World Rainforest Movement argues that many of the corporations that are now labeling their palm oil as sustainable were established by destroying rainforests and continue to use harmful practices, disobey local laws and violate human rights.

WHAT YOU CAN DO:


One Response to “Fires in Indonesia and Beyond”