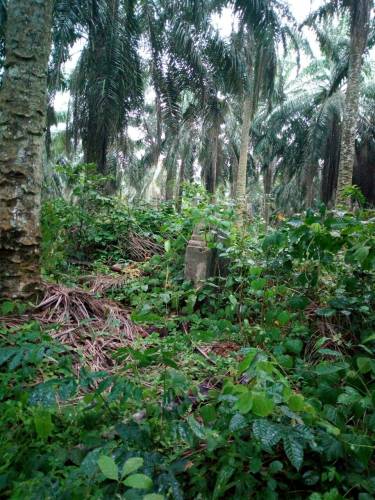 Mbonjo village graves surrounded by the palm trees of the SOCAPALM plantation. Photo by Jaff Bamenjo.

Imagine the graves of your loved ones being taken over by a palm tree plantation for the export of palm oil. The palm trees stand tall, surrounding the graves, and standing on the graves themselves.

This is the experience of the people of the Mbonjo village in the Littoral Region of Cameroon. Mbonjo is the location of the SOCAPALM palm plantation. SOCAPALM, owned and operated by the French Bollore Group and Belgium SOCFIN Group, received a concession from the government of Cameroon in 1990 for 13,500 hectares (52 square miles) of land.

In Cameroon, plantation agriculture has been promoted since the colonial era and after independence in 1960 by the succeeding government of the country. The assumption by government is that industrial agricultural projects bring foreign direct investment, create local employment and promote infrastructure development in the country.

While such assumptions might be true to a certain extent, we have observed over several years of land rights advocacy that plantation agriculture leads to violation of traditional land and resource rights of local communities.

Unfortunately, the rights of communities are always considered last if considered at all when ceding land to multinational corporations, and ultimately leads to conflict.

Affected local communities engage in mobilization and resistance to such land deals in an effort to bring about change and the restoration of their land rights.

In October, I travelled to Mbonjo village to support the efforts of SYNAPARCAM, the National Association of Peasant and River Populations of Cameroon, to defend the land rights of local communities impacted by the SOCAPALM plantation.

According to Emmanuel Elong, president of SYNAPARCAM, the SOCAPALM plantation has not contributed to the development and the wellbeing of the population of Mbonjo, but has instead brought hardship and bred distrust between the company and the population.

The population of close to 300 people were forced to abandon their village to give way to the palm plantation. Most of the villagers we talked to still have deeply painful memories of the displacement they experienced. They were obliged to leave behind their cultural heritage and fertile land to make new homes at a new site.

They still visit the village cemetery to pay respect to their loved ones. But the palm plantation has invaded the cemetery, overcrowding the graves.

An old village church building was also swallowed by the plantation.

Elong with tears in his eyes, spoke of how their ancestors are treated with such disrespect by the company that they have gone so far as to plant trees in the grave yard for profit.

This, according to Elong, is unacceptable because in the Mbonjo culture, the resting place of the dead is to be respected and protected. That is why SYNAPARCAM has started an advocacy campaign to reclaim part of the SOCAPALM concession as vital space for the Mbonjo village.

The villagers of Mbonjo have become strangers in their own land. Madam Mbango Martine laments how there is currently little farm land available in the new village site to grow their subsistence crops or grow their own family palm plantations.

When they do grow their own palm trees and are seen with palm nuts, the security agents of SOCAPALM treat them as thieves and are known to beat villagers. Martine says, “It’s like the villagers of Mbonjo are living inside a hole, and need somebody to send them a rope so they can climb out.”

For many years now, we at RELUFA, the Joining Hands network in Cameroon, have been involved in raising communities’ voices in the face of massive investments in commercial plantations. These investments in many cases have increased poverty and taken away the main resource that most communities hang on to in poor rural and urban communities: land.

We believe these investments could have great potential for the country, but more importantly, we believe that our country, blessed with fertile soil, and more than 70% of its population involved in agriculture, should invest to get back to self-sufficiency first, so that local and national food needs are met before producing for international markets.

Organizations like SYNAPARCAM are often intimidated, threatened, and silenced. RELUFA works to support such organizations by creating a national solidarity network and encouraging national dialogue around better land and agricultural policies that can generate long-term employment and lift millions out of poverty.

We work to monitor the new wave of investments rushing into Cameroon and ensure they aren’t harmful to local communities.

In the case of SOCAPALM in Mbonjo village, we believe that the lives of local communities have been worsened by their operations and actions, and we support SYNAPARCAM in their efforts to push for change.