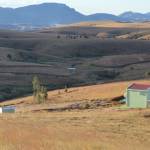 Dan Turk shared with us today about the Environmental Education Program, a part of the Developmental Department of the FJKM church.  Dan described four main elements of the program:

Student pastors at the Ivanto Seminary are trained in the garden, orchard and fruit tree nursery, part of the Seminary campus. In addition there are annual field trips to the Mahatsinjo Fruit Tree Center at Matratsinjo Maevatanana and the Arboretum at Ranomafana. Upon graduation, each student is given ten trees for planting at their new churches. He showed us various photos showing students with crops, included one that was featured in Mission Crossroads.

Technical assistance for various FJKM entities. At the end of our program, on November 19th, we observed trees that had been planted on the grounds of the FJKM church at Mahatsinjo Maevatanana. There are plans to plant four thousand trees with the assistance of several churches; church members ware taught to care for the trees.

New initiatives are planned for FJKM schools. This is a part of a plan to instill environmental consciousness in students. At a national meeting of 600 principals at Ambatomanga, a presentation was made. Later in October thirty five district superintendents were trained. Additional training for new teachers is planned for thirty five pilot schools.

At the Mahatsinjo Fruit Tree Center a multipurpose building was begun in 2016 and completed in June 2017. In addition to living quarters for the nursery caretaker, we observed a two story building with a large training room, an upper meeting room and storage space. A photo made in February, 2017 showed a tree planting on the thirteen hectare facility. Most of the 270 trees and palms planted at that time were in good shape in November 2017. In addition there is a nursery with shade for various plants including twenty two varieties of grafted mango trees. Two wells had been dug for bucket watering of plants at the center. Plans for a gravity water system are in the works. Activities at this center include training, sale of fruit trees, outreach and extension work to surrounding communities and schools.

We also took a long drive to Antsirabe where we visited Pastor Audin at the “KAMAFA” church (another of the FJKM church’s many acronyms!).  He led us on a tour of the church’s Technical Education Center where students learn  mechanical, electrical, mathematical and computer skills, all aspects of a three year program. We were shown a machine shop, complete with many different machines, including welding. Forty eight students, including four girls, beginning at ninth grade will complete the training earning a technical BAC. The earlier students were awarded free tuition by the Swiss company sponsoring the program. Later students will pay their own tuition.

Following this, a typical Malagasy meal was served by members of the church’s staff and Pastor Audin and his wife joined us for the meal in the church’s large multipurpose room. Our visit was completed with a tour of the very large and magnificent sanctuary where thousands worship.

A group of ten US Presbyterians visited Madagascar November 7 to 17 under the auspices of the Presbyterian Peacemaking Program and Environmental Ministries to learn more about the FJKM’s various ministries of reconciliation and peace-building, as well as its efforts to promote sustainable human development whilst protecting the integrity of creation.

The group included Rev. Carl Horton, the coordinator of the Peacemaking Program, and Douglas Tilton, the PC(USA)’s Regional Liaison for Southern Africa. In-country leadership was provided by PC(USA) Mission Co-workers Dan and Elizabeth Turk and two representatives of our FJKM hosts: Pastor Lala Rasendrahasina, the immediate past President of the FJKM, and Pastor Lala Nirina Rakotoarisoa, the former head of the FJKM’s Chaplaincy Program.