The church is responding to the Syria-Turkey earthquake, GIVE NOW!
Make A Donation Click Here >
Home › ‘You cannot love if your heart is not soft’

A 2017 International Peacemaker living and working in Odessa, Ukraine, answers questions from PC(USA) youth during a moving webinar on Sunday 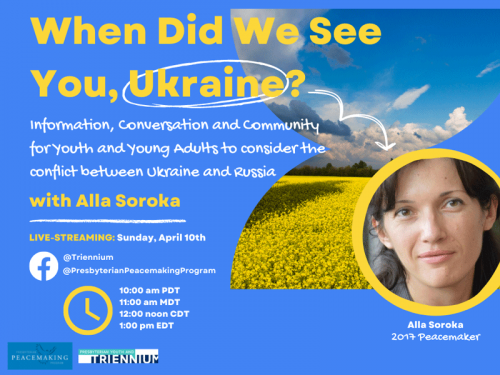 LOUISVILLE — Alla Soroka is a 2017 International Peacemaker living and working in Odessa, Ukraine. She’s clearly devoted to her work with at-risk teenagers — even those who are beyond being considered at-risk and are incarcerated.

With the help of translator Dasha Yakovenko, Soroka appeared Sunday during a moving, illuminating and youth-driven webinar called “When Did We See You, Ukraine?” put on by the Office of Presbyterian Youth and Triennium/PYT Beyond and the Presbyterian Peacemaking Program. Watch Soroka’s 56-minute conversation with PYT’s Gina Yeager-Buckley and the PPP’s coordinator, the Rev. Carl Horton, by clicking here.

For 15 years, Soroka has served as project manager for This Child Here, a nonprofit dedicated to helping orphans and other vulnerable youth in her native Ukraine. During Sunday’s webinar, Soroka answered questions posed by Presbyterian youth from around the country. Among the questions and answers:

An eighth-grade confirmation class in South Carolina asked about Soroka’s personal safety: “Are you near any fighting and danger?”

No Russian troops are around Odessa, Soroka replied through her interpreter, but “my city is from time to time bombed by rockets.” The targets are infrastructure, she explained. “However, we do have some people living near this infrastructure who become victims of bombings. Their homes are damaged as a result.” Other victims from Odessa are serving in the Ukrainian military, Soroka said.

“Now I am much more disciplined,” Soroka said as compared to her life before the Feb. 24 invasion. “I used to wake up and brush my teeth and have morning prayer or not. It was optional.” But since the invasion, “now 100% of the time in the morning I am praying. This gives me power and energy and supports me a lot during this time.” She also exercises every day. “From nervousness and psychological tension, the body is stressed. It’s important to take care of it.” Only after breakfast does Soroka watch any televised news reporting. “I don’t watch a lot of news. I mostly read [news reports]. There is a lot of information out there. It’s stressful and it takes a lot of energy to process it. If I took time to read all the news, I wouldn’t have the ability to go through my day. I try to keep up my informational hygiene.”

A high school sophomore in Cleveland asked if Ukrainian teens are required to join the military. Are many still in school?

Most are still in school, but are taking classes online, Soroka said, a practice that “started during the [COVID-19] lockdown and now it’s just continuing.” When she ventures outside in between the air raid sirens, “I see kids playing football, basketball and volleyball and talking to each other. They aren’t in front of their computers all the time.” The army mobilization that began Feb. 25 affects Ukrainians between the ages of 18 and 60, Soroka said.

A Sunday school class in Tallahassee, Florida, wondered if Soroka has been able to continue working with at-risk youth since the invasion.

“We cannot be conducting the work like we used to in groups. We can’t gather in one place,” she said. “We get [air raid] sirens and we go to bomb shelters. It’s risky to have a lot of kids in one place.” Most of the discussions and classes with the youth the program serves are being held online.

A high school senior wondered if all Russians are in agreement with Russian President Vladimir Putin, or “are there some good relationships with some of the people [in Russia]?”

“It’s a good question,” Soroka said. “Can a bad nation have a good leader, or a good nation have a bad leader? … We have friends in Russia who are aware of what’s going on, but some want to look away and pretend that nothing is happening.” Some Russians who express support for the invasion get their information only from government-controlled television programs, she said, “which channel ideas Putin is trying to enforce. They support him because these ideas have been put into such a good light by the television reports.” There are also “a lot of people completely against the actions of their government. They feel a lot of shame and guilt over what their country is doing to their neighbors.” Some have written to Soroka, asking: “What can we do? How can we help?” “It’s a new face that Russia has shown to the world,” Soroka said. “It’s a dark face and it’s hard to accept.”

A sixth-grade Sunday school class wanted to know what Soroka misses the most. Also, what do Ukrainian teens miss the most?

One thing Soroka won’t miss is the frequency of the sirens, which she called “annoying and stressful.” She recently talked with a group of teens from a city under attack in the south of Ukraine. “There was a lot of fear in their eyes, a lot of sadness,” she said. “That’s something that I don’t want to see in children’s eyes anymore.” Teens in Ukraine want the same things their counterparts in the United States want, she said. “They want to hang out, do sports, fall in love and talk about falling in love — hang out and eat some chips.” Teens in Ukraine “have questions about what’s happening right now, and they’re turning to adults for answers to help them cope a little bit better.” 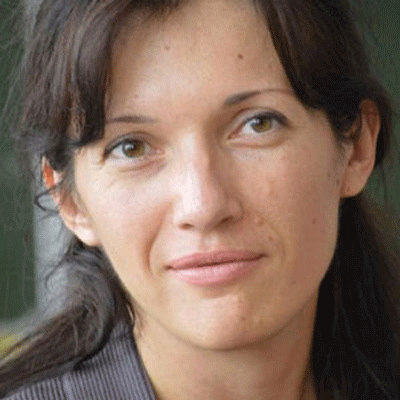 Youth attending a PC(USA) church in Oregon asked Soroka, “Are there specific things American teens can pray for Ukrainian and Russian teens?”

“During wartime, there is a big risk of people’s hearts becoming rigid and hard,” Soroka replied. “It’s very important to pray for people to keep their hearts soft. It’s more painful to love when your heart is soft, but you cannot love if your heart is not soft. It’s better to have a heart that’s wounded at times than to have a rigid and maybe cold heart, which can turn cruel sometimes.” Inside each teen, “God has put into their hearts their mission on Earth. It’s important for each teen to discover this mission on their own. You can only do that if you are being mindful and you’re walking your earthly path with a lot of dignity. It’s important to be brave at this time. Those are the things,” Soroka said, “that are the most important things to pray for.”

“There is something a broken heart can pray for authentically,” Yeager-Buckley told her. “Young people can understand that.” Then Yeager-Buckley relayed this question from an American young person:

It doesn’t feel right to celebrate Easter like we do. Jesus died and rose again during a time of chaos [as Ukraine is experiencing]. What do you think about that right now?

Drawing from Ecclesiastes 3:1-8, Soroka said that “we need God most of all” during a time of war. “It’s important to remember peace doesn’t happen by itself. It never does,” she said. She tells imprisoned youth that it’s “important to remember our God is not a weak god, but a strong, powerful god, the God who defeated death. Remembering that and believing God makes us braver and more powerful.” Although Americans and Ukrainians live on different continents, “in God’s family we are all united. God’s family has no borders,” Soroka said. “Who should win? Love, the love for humanity — not for power or money.” In the U.S., “it’s important to keep peace and pray for it. We will be praying for it as well.”

Yeager-Buckley told Soroka what’s clear from the questions is “their care and concern for you, and their curiosity and deep passion for the wholeness of God’s kin-dom.

“When Alla was with us,” Horton recalled from five years ago, “she taught us so much about caring for young people on the street and in prison.” With her ministry of nonviolence and “a better way around conflict and peacebuilding, you are the best teacher for our young people today,” Horton told Soroka. “Your work continues to remind us how important peace is — that peace doesn’t just happen, but we are the peacemakers. It feels like we are one family.”

The Office of Presbyterian Youth and Triennium/PYT Beyond and the Presbyterian Peacemaking Program are supported by your gifts to Special Offerings of the PC(USA).

In the next two weeks, look for the release of a pair of Youth Ministry Quicksheets with a focus on youth engagement with Ukraine. According to Gina Yeager-Buckley, the free resources, part of the “When Did We See You, Ukraine?” series, will explore questions, customs, feelings and experiences of practicing solidarity. The first will be called “Talking with Your Youth About Ukraine,” while the second will be “Practices for Solidarity and Understanding.” After they’re published, look for them here.