Make A Donation Click Here >
Home › What did the war really cost? 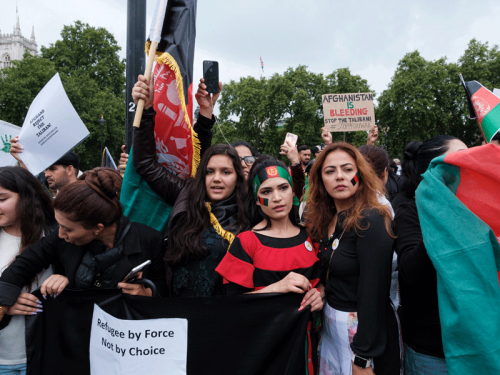 Protesters at the Stop Killing Afghan Protest, held in London on Aug. 22. (Photo by Ehimetalor Akhere Unuabona via Unsplash)

LEXINGTON, Kentucky — Now that the War in Afghanistan has ended, the cost of the United States’ longest war can be represented in numbers:

On Tuesday, the Presbyterian Church (U.S.A.) Office of Public Witness (OPW) gathered with colleagues in the Presbyterian Ministry at the United Nations and Presbyterian Disaster Assistance (PDA) and a representative from the United Methodist Church to dive into those numbers, asking questions like who profited and who is still likely to pay a price for the nearly 20-year conflict.

“The humanitarian conditions in Afghanistan are increasingly dire,” Catherine Gordon, Representative for International Issues for OPW, said in opening remarks for the webinar, “Afghanistan and the Costs of War.” “Nearly half of Afghanistan’s population needs humanitarian assistance, and seven out of 10 Afghans will soon be living below the poverty line. One in three Afghans are going hungry and nearly 10 million children are in dire need of aid. With winter approaching, the humanitarian crisis is only expected to deepen.”

Sue Rheem, Presbyterian Representative to the United Nations, said the situation was even worse, and conditions in Afghanistan change “day to day, actually hour by hour.”

Rheem said that there are 14 million people in Afghanistan facing acute food insecurity and 2 million children at risk of malnutrition. The United Nations estimates the population of Afghanistan is 39,835,428. Rheem said 45% of the population is under age 15, and 10 million children need humanitarian aid to survive. Some other staggering numbers Rheem delivered included 90% of households with heads that have high school or university degrees can’t afford enough food to feed their families, and only 17% of healthcare facilities in the country are functional.

“The economy is collapsing, and the banking system, they are saying, could collapse any day,” Rheem said. “And that’s really affecting the work of the aid groups to stave off hunger and sickness as winter approaches, and that is due to the suspension of aid by many countries who have refused to recognize the Taliban. And as so, the institutions and countries have frozen assets, the World Bank and the International Monetary Fund have suspended aid and disbursement of funds, the U.S. has stopped $9.4 billion in reserves to the Afghan central bank.”

“That has really caused the ordinary citizens’ inability to withdraw cash to be paid, and only be able to draw small, small portions if they are able to actually access the one ATM that’s available. And that is affecting all the critical sectors of society for teachers and educators who are being paid from foreign aid. The situation is very dire.”

David Wildman, Executive Secretary for Human Rights & Racial Justice with the United Methodist Church’s General Board of Global Ministries, noted that since the 1970s, almost no nation has received more foreign aid than Afghanistan, “but 95% or more of that aid has been weapons, and money for war.” He went on to connect some dots.

While the United States Congress hotly debates spending on infrastructure, Wildman says, it has overwhelmingly approved the same and more for wars. 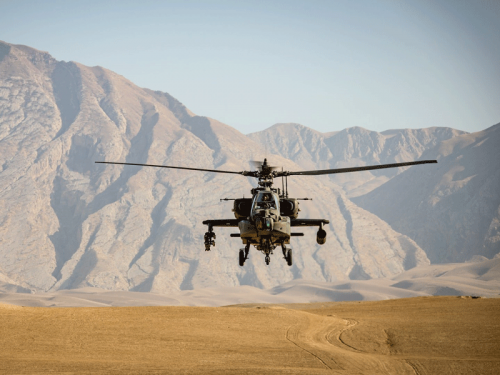 An Apache helicopter in Afghanistan, photographed in September 2020. (Photo by Andre Klimke via Unsplash)

“The cost of this war is not only the human toll of lives lost and those injured civilians and combatants on all sides, but also the tremendous waste of resources that could have gone to opening health clinics, training midwives, supporting agriculture, and other projects in Afghanistan and supporting development and resources and economic empowerment,” Wildman said.

While the war has taken a devastating toll on Afghanistan and, in many ways the United States, Wildman noted it has been very profitable for many, particularly Lockheed, Boeing, General Dynamics, Raytheon and Northrop Grumman, which he said have received the largest number of military contracts through the Pentagon budget during the conflict.

Driving up those costs, he said, is deep corruption on many sides, including the Afghan government that the U.S. was supporting.

Rheem also noted that more than 600,000 Afghans have been displaced since the beginning of this year, and the majority of them are women and children. Susan Krehbiel, Associate for Refugees and Asylum for PDA, addressed the refugee situation.

As is often the case, most people are staying closer to home, with hopes of someday being able to return, Krehbiel said. But more than 100,000 Afghans are expected to relocate to the United States, particularly those who have secured Special Immigrant Visas (SIV) through work with the U.S. military.

Refugee resettlement was a place with some glimmers of good news, as Krehbiel said Congress has approved refugee benefits for Afghans considered humanitarian parolees, which will give them access to benefits such as reception and placement services, and access to healthcare, food stamps, and some cash assistance. Krehbiel said PDA has committed $100,000 to support transitional housing for Afghan refugees arriving in the United States, and it is working with Church World Service on outreach and education efforts, including a November virtual conference to strengthen support for refugees, immigrants, and migrants.

Even with some positive news, being a refugee is a traumatic experience that is made more difficult by many aspects of U.S. policy, and Krehbiel said advocacy is important in addition to welcoming. PDA has been updating the Afghan refugee situation on its blog. 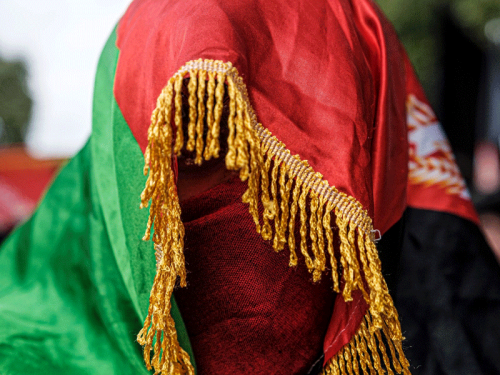 The Stop Killing Afghan Protest was held in London on Aug. 22. (Photo by Ehimetalor Akhere Unuabona via Unsplash)

Advocacy is also important when it comes to U.S. military policy, Wildman said, noting that the five largest military contractors have devoted two-and-a-half billion dollars to lobbying efforts and have more than 700 lobbyists on Capitol Hill.

“The need for us to really repent is so great,” Rheem said. “As I was looking at these numbers last night, it just hit home, how hard it is for people around the world as we sit here and we have these discussions. We have to do more than discussions, and we need to do it in our neighborhoods and our communities and find ways to help advocate.

“There are things that we can do in our actions to make sure we are peacemakers. And we can talk to our neighbors about the companies that are benefiting and profiting off of war machines, and what the what the truth really is.”

Ismail Safi, Assistant Director of International Programs for Islamic Relief USA, was also scheduled to join the discussion, but had to cancel due to a death in his family.