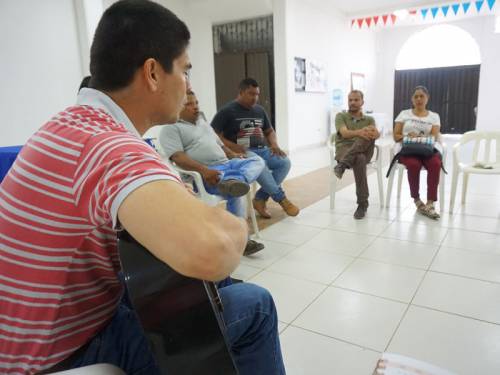 Singing and a time of prayer preceded a meeting with members of Urabá Presbytery. (Photo by Robyn Davis Sekula)

Editor’s note: This is the third in a series of three stories about the work of the Presbyterian Church of Colombia (IPC) and the ways in which the Presbyterian Church (U.S.A.) supports that work. This story concentrates on Urabá Presbytery, which is headquartered in Apartadó. To read the first story in the series, click here. To read the second story in the series, click here.

It is also a place that has been deeply affected by violence attributed to drug traffickers, paramilitary and guerilla groups, and the Colombian armed forces. Nearly 80 percent of the members of Urabá Presbytery are displaced people, which means they’ve been forced off their land. The presbytery includes the region around Apartadó and encompasses 10 churches and another 14 congregations (Colombian church leaders use the term congregations for new church developments that are not yet chartered.).

This presbytery is one of three in Colombia, and its offices are located in Apartadó on the campus of the Colegio Americano school. It is the most rural of the three.

To serve as a community leader in this region is to risk one’s life, and the life of one’s family.

Since the Peace Accords were signed in 2017, the region is calmer. But it feels like an uneasy calm. “We are less fearful,” says Rev. Diego Higuita, Executive Secretary of the Presbyterian Church of Colombia (known by its Spanish name, IPC). “But we are not at peace.” Indeed, under the current administration hundreds of peasant leaders and human rights activists have been assassinated, most of them in remote rural areas.

Presbyterian Foundation leaders recently visited Colombia to better understand the country, its history of conflict, and what support is needed today as the IPC continues to minister in partnership with the PC(USA).

Presbyterian World Mission has two mission co-workers serving in Colombia, both living in Barranquilla: Rev. Sarah Henken, who is engaged in peace and reconciliation work with the IPC, and Rev. Dr. César Carhuachín, who teaches at the Reformed University.

Dennis Smith, World Mission’s regional liaison for South America, traveled with the group and served as an interpreter throughout the trip, bringing both language clarity and Colombian context to our visits. Both Smith and Maribel Pérez, his wife, are PC(USA) mission co-workers based in Argentina.

Urabá Presbytery counts on its partners in the U.S. to assist with its peace-building mission. This includes a covenant relationship with Winnebago Presbytery. Urabá also has a missional relationship with First Presbyterian Church in Stockton, Calif., which has helped to provide clean water sources to the area.

Vienna Presbyterian Church in Vienna, Va., has sent four teams to Apartadó in partnership with the Urabá Presbytery. “VPC members Joan and Dave Gifford were invited by the Presbytery of Urabá to accompany them on a vision trip in 2010, and they returned convicted to establish a relationship between the people of Colombia and VPC,” says Sue Hamblen, mission director of VPC.

This area suffers from extensive environmental pollution, mostly due to chemicals and pesticides used on export plantations, especially bananas and palm oil. Clean water sources are desperately needed, and planting new trees helps create a better environment in the area.

Higuita has been part of the Presbytery of Urabá since it was created in 1991. He is part of the larger Colombian church and has long worked as a community leader. 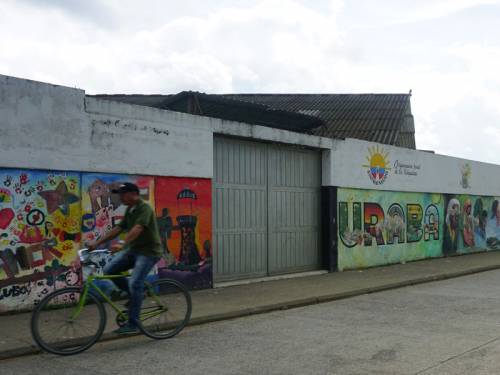 A street scene in Apartadó , Colombia. Urabá Presbytery has its offices in Apartadó. (Photo by Robyn Davis Sekula)

The presbytery is heavily involved in the work of DiPaz, a faith-based organization that participated actively in the dialog between the Colombian government and FARC, one of Colombia’s main guerrilla groups. Through its participation in DiPaz, the Presbyterian Church of Colombia monitors the implementation of the Peace Accords. In addition, the IPC provides training and pastoral accompaniment to former guerrilla fighters who have turned in their weapons to the UN and seek to be reintegrated into Colombian society. The IPC and DiPaz also hold workshops on peace and reconciliation in communities ravaged by violence.

One focus of their work in Apartadó is to chronicle the stories of “the disappeared” — those presumed or known to be kidnapped by guerillas or paramilitary forces who never returned home. In one community, 42 people were “disappeared” in retribution for 42 heads of cattle that were taken. These 42 people included a pastor and two children. “We are going to honor the memory of those people by registering what happened, who disappeared and documenting,” says Apolinar Escobar Carrillo, who serves as moderator of the presbytery and also on its Peace Commission.

Henken, one of two mission co-workers serving Colombia, has helped chronicle these stories. Higuita says the stories are so harrowing he sometimes has to take a break from listening. To read a few of those stories, read this Presbyterian News Service story by Henken here.

The Colombia Accompaniment Program started 15 years ago at the invitation of the IPC. At that time, the IPC was working (and has continued to work) with many displaced people/communities that were still experiencing violence. Some of the IPC leaders themselves had come under threat, says Alison Wood, accompaniment coordinator for the Presbyterian Peace Fellowship.

Over the past 15 years, PPF has worked in partnership with Presbyterian World Mission to recruit and train accompaniers in de-escalation, nonviolence, and anti-racist solidarity work to offer consistent presence in the Presbytery of the Coast and the Presbytery of Urabá, which is where the IPC has decided accompaniers would be most useful.

“The IPC is committed to peace with justice in Colombia and does so much in pursuit of reconciliation and restoration there,” Wood says. “We’re continuing to send accompaniers to walk alongside the IPC as they continue to work for peace, with displaced communities, human rights defenders and ex-combatants.”

To learn more about becoming an accompanier, click here or send Wood an email.

Accompaniers participate in a long weekend of training and then spend a month in Colombia.

Robyn Davis Sekula is Vice President of Communications and Marketing for the Presbyterian Foundation. You can reach her by phone at (502) 569-5101 or by e-mail at robyn.sekula@presbyterianfoundation.org.