Dori is periodically in the United States and available to speak to congregations as her schedule permits. Email her to extend an invitation to visit your congregation or organization.

Dori accompanies, coordinates and coaches lay and pastoral leaders of the Presbyterian Church of Honduras as they broaden theological education and strengthen the church’s leadership capacity. One component of this is a dynamic program in collaboration with the Latin American Biblical University (UBL) of Costa Rica offering an intensive two-year theological education program for pastoral and lay leadership.

A compassionate listener and communicator, Dori provides invaluable support to the leaders of the Presbyterian Church of Honduras as they strive to fortify their church.

Honduras is a largely mountainous, sparsely populated country at the hub of Central America and is a center of Mayan culture and civilization. Columbus landed there on his fourth voyage, in 1502, and named the region Honduras (“in the depths”), perhaps impressed by ridge after rolling ridge of pine-covered mountains.

During the 20th century, when the military did not actually hold direct power in Honduras, they often wielded significant indirect power. Nevertheless, important social reforms began in 1954 with a national strike, more social reforms followed in the 1960s, and land reform came in the 1970s (with military support). Democracy returned in 1982, and in the 1990s the military influence in civilian government was greatly curbed.

In recent years, the weakness of public institutions has become evident as they struggle to respond effectively to present-day challenges, including the growing demands of a populace empowered by democracy. Although the per capita income of Honduras is one of the lowest in Latin America, it has improved slightly in recent decades.

The PC(USA)’s partner church in Honduras is the Presbyterian Church in Honduras. Its first congregation was founded in 1960 by missionaries from the National Evangelical Presbyterian Church of Guatemala, a church that was started in 1882 by Presbyterian missionaries from the U.S. It is a small but rapidly growing denomination primarily present in rural, impoverished communities. Their depth of faith in Jesus Christ and eagerness to learn and grow in the Spirit has led to them to more than double the number of congregations in the past decade. Presbyteries and congregations of the PC(USA) that have committed to mission partnership with the Presbyterian Church of Honduras can attest to how much spiritual growth and transformation we are privileged to experience sparked by the faithful testimony of our Honduran brothers and sisters.

The third generation of Presbyterian pastors called to mission service in her family, Dori is rooted in mission.

She was born and raised in the Southwest U.S. border region, a multicultural and multilingual place with longer history in Mexico, Spain and pre-Columbian civilizations than in the Anglo U.S. She has also spent time living and working in Central Kentucky, a place whose border identity is shaped as much by the Ohio River and Appalachian Mountains as by the U.S. Civil War and the racial and cultural conflicts that go along with it.

As Dori explains, she finds “energy and divine transformation in these border regions” and believes “humans are enriched by recognizing and engaging with our own internal and external borders.” Her commitment to mindfully inhabiting physical and spiritual borderlands enhances her ability to listen actively and reflectively to the people with whom she partners in ministry.

The concept of God’s presence among and preference for the poor and oppressed, and not the rich and powerful, is a thread that runs through the entirety of scripture. I believe Jesus Christ’s purpose was to overturn the power structures of his time, and in following Jesus Christ, that is my purpose too. Working in Central America as a white English-speaking Christian, I will be working in a landscape that has been overtly shaped by paternalism and colonialism. I hope that I will not only avoid the old patterns and ruts that these forces have created, but that I will actively take part in forming new patterns and ways of being in relationship.

It is Dori’s prayer that the church will continue to critically examine its own role in the perpetuation of inequality, racism and oppression, particularly in the Americas. She prays that Christians, especially white English-speaking Christians, will commit to work that is anti-racist, anti-patriarchal and antithetical to the dominating mainstream culture of division and fear.

Prior to working with Presbyterian World Mission in Honduras, Dori served as a chaplain in a number of settings. Most recently, she provided spiritual care to hospice patients in their homes and in assisted living facilities. She also served hospital inpatients on a critical care burn unit, and on behavioral health and medical-surgical units.

Dori earned her master’s degree in divinity from San Francisco Theological Seminary. She also trained as a journalist at the University of Missouri and has worked as a reporter and editor.

Watch a video of Dori Hjalmarson 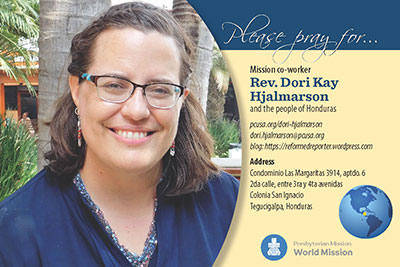 Give in honor of the ministry of Dori Hjalmarson