Cesar occasionally returns to the U.S. and is available to visit congregations. Email him to extend an invitation to visit your congregation or organization.

César Carhuachín teaches at the Reformed University of Colombia, the country’s first Protestant university. He has been called to teach Bible and Theology in the university’s School of Theology, which has its roots in the Presbyterian Theological Seminary of the Gran Colombia. The seminary was founded in the early 1980s to train clergy for the Presbyterian Church of Colombia and became part of the university when the university was formed in 2002. The School of Theology stresses the study of the Bible in its original languages and seeks to integrate the context of Colombian society into all theological study. Today students from various Protestant traditions study at the school.

In his role as professor, César seeks not only to accompany students as they work toward their academic goals, but also to inspire and encourage them to follow Jesus Christ every day and to work towards social justice. Given Colombia’s political context, César’s teachings focus on the gospel of peace and Jesus Christ’s call for us to be peacemakers. He is committed to sharing the gospel with the poor and with victims of violence. Partnering with our Colombian sisters and brothers, he strives to carry out God’s mission in Colombia.

In addition to teaching, César plays a dynamic role in the university’s academic and spiritual community. He serves as editor of Palabra y Vida, a publication of the theology program. As a member of the theology program’s research group, he writes articles for academic journals and books. In addition, César frequently preaches at local churches, administers communion and leads Bible studies. He most frequently serves at Comunidad Del Camino Presbyterian Church in Barranquilla, which meets in the school’s chapel.

Though Colombia is rich in natural resources, Colombian society is highly stratified. The families with Spanish origins hold a much greater share of the country’s wealth than the majority, mixed-race population.

Colombia has endured almost a half century of civil war. The conflict includes clashes between left-wing guerilla groups and military forces. Also in the fray are right-wing paramilitary groups that are backed by some elements of the army and the police. Both the guerilla groups and the paramilitary have been accused of involvement in drug trafficking. Human rights advocates and religious workers who speak on behalf of the millions of poor people displaced by the conflict are often the targets of violence.

The Presbyterian Church (U.S.A) maintains a vibrant historic partnership with the Presbyterian Church of Colombia (IPC), which was founded in 1856. Today the IPC engages in ministries of evangelism, education, and diaconal service in three presbyteries across the country, extending from Bogotá and Medellín in the Andes mountains, to Barranquilla on the Caribbean coast, to the fertile Urabá valley in the northwest. The IPC supports the Colombian government’s peace initiatives and advocates for peace.

Although the Colombian government in 2016 signed a historical Peace agreement with FARC (Colombian Revolutionary Armed Forces), the violence done by unknown groups and some guerrilla people still continues. A work for a peaceful society by politicians, social leaders and faith community leaders is necessary.

César has invested his life in crossing boundaries to share the good news of God’s love in Jesus Christ.

“I received the call of the Lord to the Christian ministry when I was 15 years old,” César says. His young life was shaped by mission trips that took him to places beyond his native city of Lima, Peru. “Those experiences gave me a new vision and understanding of ministry,” he says. “I realized that I could serve God, not just in my home church and city, but out of them as well.”

César’s preparation for ministry took him beyond the borders of Peru. After beginning theological studies in Lima, he moved to Argentina, where he earned a bachelor’s degree and a master’s degree in theology from the International Baptist Theological Seminary of Buenos Aires. He also received a doctorate in theology from the Pontifical Catholic University of Argentina. After serving congregations in Argentina, he was invited in 1998 to come to Charlotte, North Carolina, to begin a Hispanic ministry at Hickory Grove Baptist Church.

The Hispanic ministry flourished, and after seven and a half years it had grown into a congregation of about 350 members. Then, César sensed a call to cross another boundary, this time a denominational one. He was named coordinator of Hispanic/Latino ministries with the Presbytery of Charlotte, supporting English-speaking congregations in their outreach to the Hispanic/Latino population. He was ordained as a Presbyterian Church (USA) teaching elder in 2006.

In 2012, César sensed God’s hand leading him back to South America to serve the people of Colombia. Immersing himself in the complex social reality of this country and its long process of working toward a peace agreement with the guerrillas has led him to understand the Colombian people better. Colombia is a place where many are searching for meaning in their lives, César explains. “In this searching, people are faced with many obstacles — unequal educational opportunities, unfair salaries, oppressive structures, and lack of hope for the future. He wants to help prepare leaders for the Presbyterian Church of Colombia, which he says is working hard to address these problems.

In addition to a wealth of pastoral experience, César brings to his position the skills he developed in teaching part-time for many years in seminaries in Argentina and the United States. While serving in Charlotte, he pursued a second doctorate, earning a degree in Hispanic/Latino church leadership from the Theology School of Drew University.

César says he has been inspired by Mark 10:45: “The Son of Man came not to be served but to serve, and to give his life as a ransom for many.”

“Jesus tells us in this passage that he was and he is in the world to serve people and to give his life in sacrificial service,” César says. For César, that Scripture is a call to “give my time, gifts, creativity, and whatever I can to enrich, to affirm, and to empower the life and ministry of others.”

Watch a video of César Carhuachín 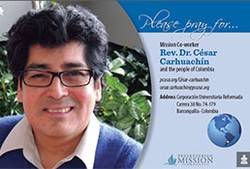 Use this card as you pray for Mission Co-worker César Carhuachín. The card includes a photo and overview of his work. César has been called…

Give in honor of the ministry of César Carhuachín