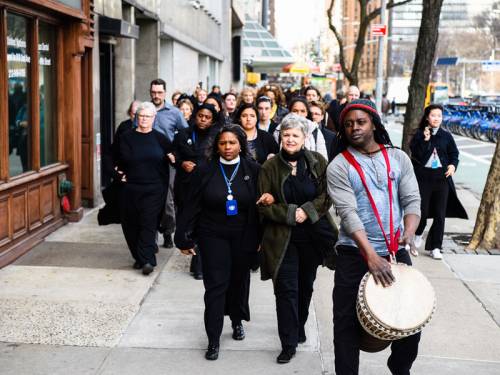 Presbyterian delegates participated in a ecumenical public witness protesting violence against women at the 63rd UN Commission on the Status of Women. (Photo by Rich Copley)

LOUISVILLE — Charles Atkins serves as chair of the Justice Committee for the Presbytery of New York City, and late last year, one of his committee members came to him with an opportunity he had never thought of.

A functional commission is a decision-making commission developed around a certain topic that meets at regular intervals — usually annually — to develop global policy related to their fields.

“It’s an enormous opportunity to be able to participate in global conversations and in some way influence resolutions that might become legislation that helps people,” Atkins said a week after finishing his work on the social development commission.

Rheem, speaking after both commissions had finished work this year, reflected, “It was a great opportunity for Presbyterians to be involved in the international arena and be able to advocate on behalf of the church on issues that we’ve all been working on. And it really gave them a connection and wider perspective and energized them and inspired them to go back to their communities and continue this work, knowing there are a whole host of people working on the same issues around the world.” 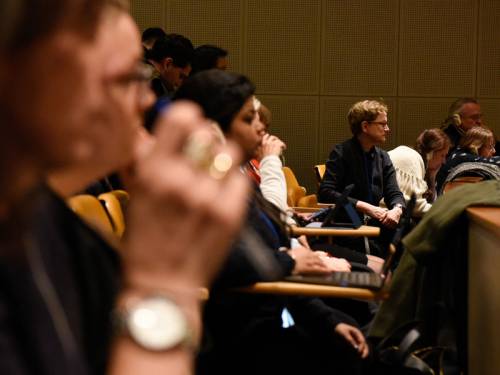 Julianne Nice, a Presbyterian delegate from New Orleans, watches a town hall meeting with UN Secretary-General António Guterres on March 12 at the 63rd UN Commission on the Status of Women. (Photo by Rich Copley)

Being in New York for the commissions gave participants chances to participate in large and small meetings, including a town hall with UN Secretary General António Guterres at the CSW, meetings with government officials and be part of discussions leading to final conclusions, which are not binding law but can be highly influential as member nations craft laws.

“We were happy with the outcome,” Ryan Smith, director of the PMUN and Presbyterian Representative to the United Nations, said of the CSW. “A lot of the pieces on equality the PC(USA) was advocating for were included, so we were happy about that. We wish that there had been stronger language for trans rights, but there is still protective language in there, so we’ll continue to work with the commission and members of the UN in the future to make sure we can strengthen the already good work they did.”

Smith said that being at commissions gives Presbyterians insight into the work their UN office does daily and the challenges it faces advocating in an international forum.

“We don’t often see big flashy statements on new items or new things,” Smith said. “It does take some time for member states to get themselves used to advancing rights, frankly.” 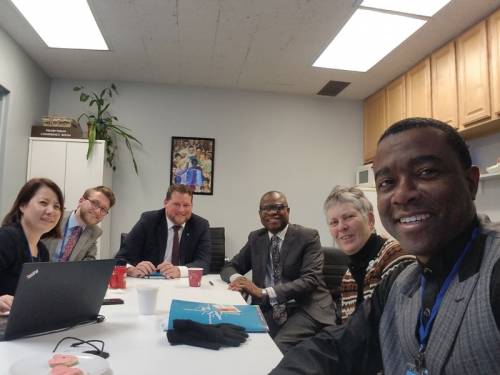 Brenda Berkman, another delegate to the CSocD, appreciated the chance to be part of the international conversation.

“Usually, when I go to a meeting, I talk,” Berkman said. “Except for the panel discussion on faith and prison, the PC(USA) wasn’t really presenting anything at the meeting. To me, that wasn’t the worst thing, because I think Americans like to talk, and honestly, we need to listen more. So, to hear perspectives of people all over the world was interesting to me and gave me a lot to think about.”

Carson Smith, the PMUN’s Young Adult Volunteer, also appreciated the cross-generational aspect of the Commission on the Status of Women, as the age-range of the PC(USA) delegation spanned 70 years.

“There are conversations I have with other young people where certain issues seem really pressing in the world,” Smith said. “Then to meet with other people who are older, maybe in retirement, and active on these issues, there’s an image of a path forward and how to proceed on some of these things and how to be useful not only in the church but in the world.”

For Atkins, the strength of the commission was simply being there.

“One thing I’ve learned is it’s about who’s able to be in the room,” he said. “While you certainly can say things through social media today … you cannot beat the power of networking. The fact that I can meet someone, shake that person’s hand, make that connection, and then use social media to follow up that connection, that’s a lot more powerful than making the connection on social media and trying to make something happen through cyberspace.

“How do I get in the room? This Presbyterian Ministry at the UN gives us the opportunity to be in the room.”

The ministry will begin accepting applications for the 2020 CSW in September. Watch Presbyterian News Service for information as it becomes available. Rheem says the UN office welcomes broad participation.

She says, “We would like to continue the leadership and ambassadorship of the program so more Presbyterians can get involved in it.”

The Presbyterian Ministry at the United Nations is supported by your gifts to the Peace & Global Witness Offering.