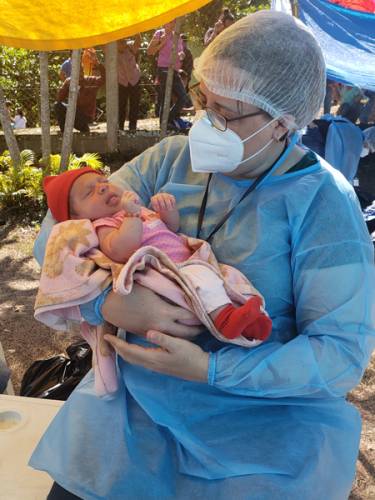 The Rev. Dori Hjalmarson, a mission co-worker serving in Honduras, holds a baby born among the devastation brought by hurricanes Eta and Iota. (Photo by Katherine Rivas)

LEXINGTON, Kentucky — The rainwater from the hurricane was held back by debris that formed a dike at the top of the village. But as the storm continued, hour after hour, the barrier broke in the middle of the night sending water rushing down the main road, taking cars, trees, homes, and people.

The Rev. Dori Hjalmarson, Presbyterian mission co-worker serving in Honduras, tells the story of a man who woke up to the sound of rushing water. He got his two young children to safety and went back for his wife and one-month-old son.

“As they were escaping the house, and it was coming down around them, he described how a tree branch or something under the water took his legs out from under him, and he went under and lost the baby — the baby was swept from his arms by the rushing water,” Hjalmarson says. “They found the baby a few days later.” 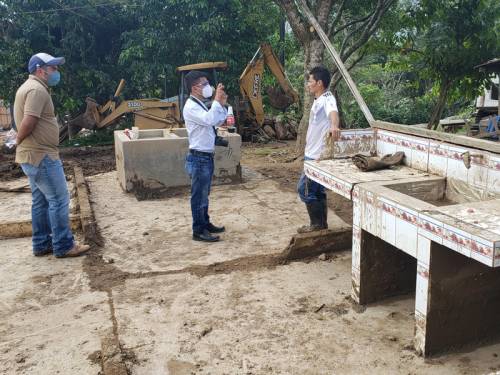 Nelson Santos interviews Adonai Sabillón Mejia, who’s standing alongside the concrete slab and pila that are all that’s left of his home. Mejia lost his infant daughter on the night of Eta. (Photo by Dori Hjalmarson)

Hjalmarson heard this and many similar stories Dec. 6, on a medical brigade and food distribution mission to San José del Oriente de Ilama, Santa Barbara to assess needs in the aftermath of back-to-back November hurricanes in Central America.

At that point, it had been more than a month since that night that Hurricane Eta devastated the village. But for the man who lost his daughter, “the feeling on his face was … he was still numb,” Hjalmarson says. “It was a month later, and it felt like he was in shock.”

He was just one of numerous people Hjalmarson and others met that day who suffered devastating loss in the hurricanes.

Her voice shook recalling a family in which the mother was evacuated to safety only to see five other family members die in the flooding. There was no evidence of their home where it had been, Hjalmarson said, the foundation buried under rocks and mud. 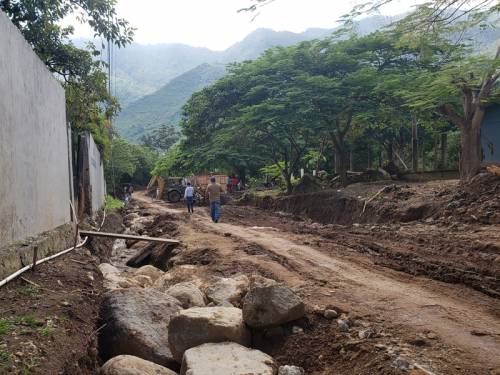 The main road through San José del Oriente de Ilama, Santa Barbara, at the front entrance of the elementary school. All the giant stones were washed down from the mountaintop and have been moved to the side of the road by work crews. (Photo by Dori Hjalmarson)

There is a long road to recovery for the village and many other communities in Central America impacted by Eta and Hurricane Iota, which struck just a week later. Even as immediate needs for food, water, shelter, and medical care are being met, church leaders along with others are looking at the long-term needs of the region, including how to help restore livelihoods such as farming and other businesses.

Crop loss is a huge concern, Hjalmarson says, be they cash crops or family food crops. In some cases, crops were simply wiped out by flooding, and in other cases farmers are cut off from their crops and won’t be able to harvest in time. She notes the coffee crop in Honduras has been severely impacted.

Tracey King-Ortega, Presbyterian World Mission’s regional liaison for Central America, and the Rev. Edwin A. González-Castillo, Presbyterian Disaster Assistance’s (PDA) Associate for Latin America and the Caribbean, have both been in broad touch with churches and other partners in the region and say they are hearing wide concern about food security and transportation. This is on top of the impact of the COVID-19 pandemic, which has made many people reluctant to seek help after the hurricanes.

“The vulnerable population is going to go without,” King-Ortega says, noting reports of prices for essentials doubling and more.

And need and desperation usually leads to increased criminal activity, González-Castillo says, having seen that firsthand when he was the Stated Clerk of the Presbytery of San Juan in the days following Hurricane Maria’s devastating blow to Puerto Rico in 2017.

That experience and subsequent work for PDA has shown him, as well as others, that the best way people can help is to make financial gifts to organizations such as PDA.

“Money has a lot of power,” González-Castillo says, because it allows partners in the places being impacted to use funds for the greatest needs, often buying locally, which helps support impacted businesses.

“I am a survivor of a hurricane, and I say this not as an employee, but as someone who has seen and still sees what PDA is doing in Puerto Rico after a hurricane, and in response to this,” González-Castillo says. “We try to be really good stewards of the funds that we get and use them in ways that help the communities in the best way we can, so we try to honor that.

“We are in communications with our partners to see what are the best ways to use these funds. Even in situations like COVID where we cannot travel, having people like Dori there and others to notice the capacity of others and the ways they can respond to situations like this helps us.”

All involved say do not send material donations such as clothing, supplies or food. That echoes the requests of disaster response professionals and volunteers from wildfires on the West Coast to hurricanes in the Southeast and beyond.

Unsolicited material donations can impede the work of responders on the ground who then must figure out how to distribute or put to use the materials they have received, which may not meet the most urgent needs.

Hjalmarson said it took volunteers three days to sort a large, unsolicited shipment of used clothing that is now sitting in a facility where it has been only lightly touched because clothing is not an urgent need and is readily accessible in the area.

“If you really need to collect used clothing, sell it, and send us the money,” Hjalmarson says.

But the biggest thing the workers for PDA and World Mission want people to know is the need in Central America following the hurricanes is great, and it will be ongoing. 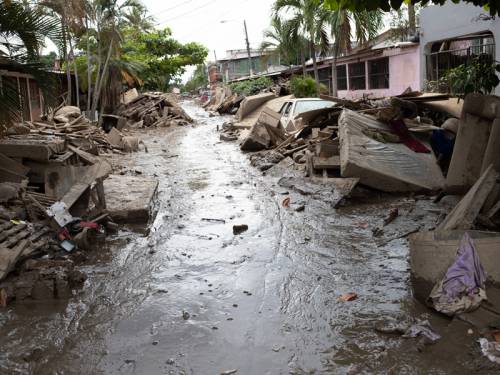 Following back-to-back hurricanes in Central America, the need is great and will be ongoing. (Photo by Sean Hawkey)

“Before Eta, people were talking about Hurricane Mitch,” Hjalmarson says, recalling the 1998 storm that killed 11,000 people in Central America. She said people felt that storm set the region back 50 years in development, raising the question of what the impact of these storms would be.

Church leaders are focused on direct support to where it will give the region its best shot to recover and thrive.

“There are a lot of churches and presbyteries and individuals that have decades of love and support for Central America,” King-Ortega says. “I’m excited about what we will be able to do there.”

CEDEPCA responds to immediate and long-term needs in Central America

Help is needed after back-to-back hurricanes in Central America 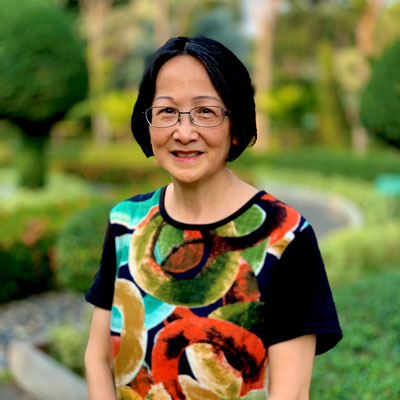