Racial Justice Resources
Make A Donation Click Here >
Home › For everyone born, a place at the table 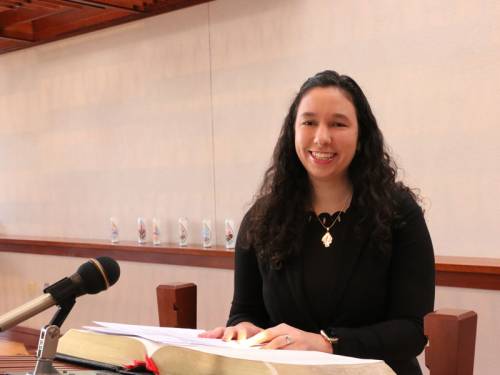 Christina Cosby, a graduate of Princeton Theological Seminary, recently joined the World Mission staff as mission specialist for the Middle East and Europe. She preached a sermon about Zacchaeus in chapel at the Presbyterian Center in Louisville on Wednesday. (Photo by Tammy Warren)

LOUISVILLE — Who are you passing by today as you hurry to get to your next destination?

Christina Cosby, mission specialist for the Middle East and Europe with Presbyterian World Mission, remembers a few months ago she was watching a TV documentary about the refugee crisis in Europe and a camp, Moria, better known by its nickname “Hell on Earth.”

She learned that refugees at Moria stand in line for hours with no guarantee that they will receive food or other basic necessities. It’s a camp built for 3,000 refugees, yet it currently houses 13,000 — people living in deplorable conditions while their asylum cases are being processed.

“I turned off the TV,” she said, “I thought, ‘Oh, these people are far away. It doesn’t really affect me here. What can I do?’”

A short time later, she started her mission specialist position in Louisville and traveled to the Greek island of Lesvos, where she and other staff visited Moria Refugee Camp.

“I was called to pause, not to simply pass by, but to look up and notice the people I once deemed as ‘other,’” Cosby said. 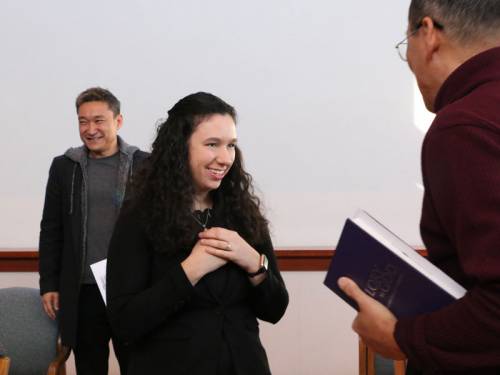 Christina Cosby shared a new way to pass Christ’s peace, which she learned during the regional gathering of Middle East and Europe mission workers recently in Lesvos, Greece. Each person clasped both of the next person’s hands and looked the person in the eye. As they let go of each other’s hands, they brought their hands to their heart, acknowledging a love that comes from God alone. (Photo by Tammy Warren)

As she preached during the chapel service at the Presbyterian Center on Wednesday, Cosby related her story to the familiar story of Zacchaeus, the tax collector who climbed a sycamore tree to see Jesus as he passed by on his way through Jericho to Jerusalem.

“In each of our lives, there are people easy to see, easy to notice, easy to pay attention to and easy to forgive,” Cosby said. “For many, our friends, family, neighbors and co-workers fall into this category, as we are familiar with their ways. When they make us mad, do us wrong, pass us by — it’s easy to look past.

“Similarly, there are people that are easy for us to overlook — the person begging for money on the street corner, the child who doesn’t speak our language, the friend who never answers our phone calls or the people featured in the news on television. When we stop to look up, to look around, to simply notice someone for who they are, we see a little of ourselves inside of them — a piece of God that we share.” 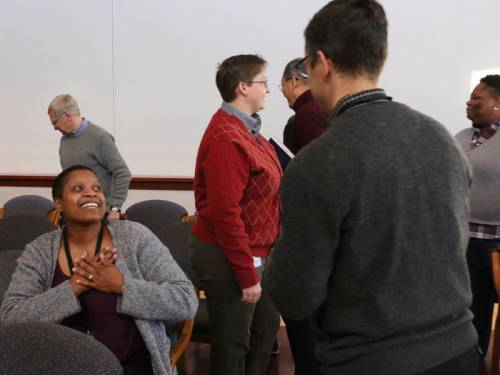 Beyond considering the forgiveness Zacchaeus received and the salvation for any wrongs he may have committed in the course of his work as a tax collector, Cosby said this passage challenges us to think deeply about those we overlook as we pass by on life’s journey. “Perhaps for us it is the poor, the orphan, the widow or perhaps it is the rich,” she said.

Asked about takeaways from her sermon about Zacchaeus, Cosby suggests three: 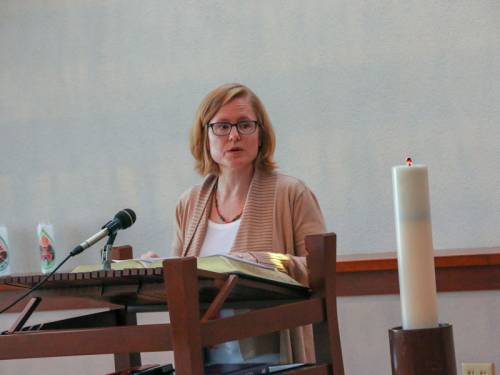 Ellen Sherby, coordinator for Equipping for Mission Involvement, presents several prayers for people around the world, provided by staff in World Mission. (Photo by Tammy Warren)

Prior to joining the World Mission staff, Cosby, a native of Lynchburg, Virginia, served as director of Christian formation at Madison Avenue Presbyterian Church in New York City. She also helped oversee the church’s homeless shelter.

“In New York City you see homeless people all the time,” Cosby said, “but actually having a chance to know them and to respect them as people, and for them to respect me, it’s just a beautiful experience.” On her last night before her move to Louisville, she threw a pizza party for the 12 men who live in the shelter. “This was a special ministry, and I wanted a chance to say goodbye,” she said. “They are just wonderful guys.”

Cosby earned her Master of Divinity degree from Princeton Theological Seminary and is currently a candidate for ordination. She said she feels blessed to have had supportive congregations, family and friends in her life.

“It’s nice to know you have a community of faith surrounding you, to pray for you when you can’t and to celebrate with you when you can,” Cosby said. “I think our faith is done best in community.”