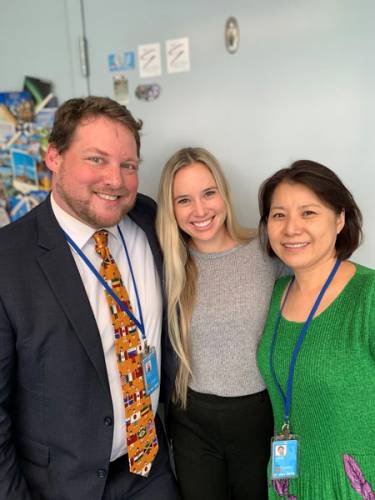 The UN General Assembly is a time where the Presbyterian Ministry at the United Nations continues the work we do every day in the UN community,” says Ryan D. Smith, director of the UN office and Presbyterian Representative to the United Nations. “During this time, we have access to some of the highest levels of government and maintain and advocate our witness within the international community.”

This year, the Presbyterian Ministry at the UN will focus on human rights and climate change as our advocacy priorities. We know that these highlight the Presbyterian Mission Agency Matthew 25. Without human rights, none of the goals could be accomplished. We know that climate change impacts marginalized communities the most. We know that the right to religious freedom, in all of its forms, helps create a place in the community for vitalized congregations. We know that Imago Dei calls on us to recognize the equality and the likeness and image of God in all of us.

Joining Smith and Mission Specialist Sue Rheem this year is a new face in the UN office, which is in the Church Center for the United Nations, directly across First Avenue from the United Nations headquarters in Midtown Manhattan. Ivy Lopedito has joined the staff as an administrative assistant.

Joining the office right as this global event is about to unfold, I am filled with excitement and I am deeply humbled to be given the opportunity to attend the UN General Assembly,” says. “I quickly realized the importance of this ministry, and how valuable it is for the church to engage in ministry on a global scale. This ministry has provided me with a great example of what it looks like to be a Matthew 25 denomination, actively seeking to live out our call as followers of Jesus Christ.

I am eager to attend the UN General Assembly and witness how all Member States will discuss international issues, ultimately seeking peace and justice for all. My hope and prayer is to learn and grow from this experience and the opportunities within this ministry so that I can love and serve others to the best of my ability, while also taking what I have learned to help others practically live out God’s call to justice on an international level.”

As the week got started, PMUN staff were slated to participate in a variety of events including the UN Climate Action Summit, which included a widely-seen talk by 16-year-old Swedish activist Greta Thunberg ecumenical and interfaith services for climate justice; an interfaith consultation on the climate emergency and consultation on violence against places of worship; the Sustainable Development Goals Summit; Dialogue on Financing Adaptation and High Level Dialogue on Financing for Development; UNAIDS Faith Partners 2019 HIV Communities of Faith Breakfast; Africa Business Forum; Human Rights and Agenda 2030 with the High Commissioner for Human Rights H.E. Michelle Bachelet; and a meeting with the Foreign Minister of Cuba. All that, and PMUN staff will also attend the UN General Debate Tuesday through Saturday.

Many events will be streamed live on UN Web TV.

It is an opportunity to be part of one of the biggest global events of the year, but Smith says PMUN staff members are always conscious of their roles representing the church.

“The Presbyterian Ministry at the UN serves as a witness to the policies of the Presbyterian Church (U.S.A.)’s General Assemblies,” Smith said. “We recognize the responsibility our office has in advocating the Church’s policies which are inspired by the Holy Spirit to the governments of the world who should be representing their citizens.”

The work of the Presbyterian Ministry at the United Nations is made possible by your generous contributions to the Peace & Global Witness Offering.