The church is responding to the Syria-Turkey earthquake, GIVE NOW!
Make A Donation Click Here >
Home › Presbyterian Mission Agency Board worships twice and learns a lot about the Agency’s future

As he’s done before, the Rev. Kevin Johnson wows his colleagues with insightful and powerful closing worship

The Matthew 25 invitation continues to be a centerpiece of the work of the Presbyterian Church (U.S.A.)

LOUISVILLE — Sandwiched between two brief but effective worship services, the Presbyterian Mission Agency Board met via Zoom Thursday to learn more about the work of innovation, repair, Matthew 25, the grant process and professional development and diversity training that’s ongoing among PMA staff.

“You can’t change the wind, but you can adjust the sails.” Those are the words the Rev. Diane Curtis, a board member from New Jersey who led opening worship, reads every time she enters a local cancer treatment building. “There’s a lot of change ahead, and change is hard: hard for us as individuals, and hard for us as the Presbyterian Mission Agency. There’s a lot of boats going in a lot of different directions.”

The report from the president/executive director

“I hope you’ll share some of the excitement as we see ourselves shifting,” the Rev. Diane Givens Moffett told board members. 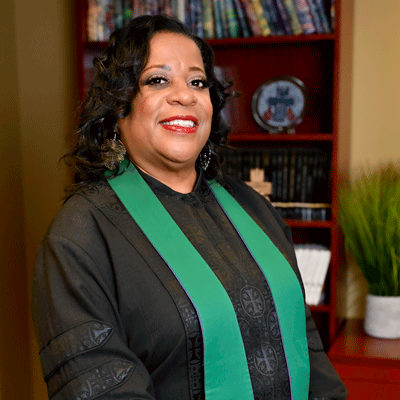 The Rev. Dr. Diane Givens Moffett is president and executive director of the Presbyterian Mission Agency. (Photo by Rich Copley)

Worshiping communities, mid councils and groups helped expand the Matthew 25 ranks by 10% in 2022, Moffett reported, and a national Matthew 25 gathering is planned for Jan. 16-18, 2024, in Atlanta. The Rev. Shanea Leonard, who’s helping coordinate planning for the gathering, said organizers are working with Montreat Conference Center employees “to make sure [the conference] is a place for young adults.” It’s also consulting with the Presbytery of Greater Atlanta on how attendees can give back to the host community. The goal is to make the first-ever gathering “interactive and inviting,” Leonard said.

Moffett also discussed a Vision Convocation designed for all PMA staff. It’ll be offered March 20-24 at the Presbyterian Center in Louisville, Kentucky.

Along with Texas A&M University, Puentes de Cristo works on the Colonias Program, which serves distressed, underdeveloped communities in Texas, mainly along its border with Mexico. Hidalgo County alone has 800 Colonias, the home to about 500,000 people — half of them under 18.

“Every day we encounter a new issue,” Fernández said. The newest is families reporting having to pay an irrigation tax that a legal aid organization says they’re not responsible for. Some bills were as high as $1,200.

Of Hidalgo County’s one million residents, 40% live in poverty and about 100,000 are undocumented residents living in Colonias, Fernández said. Puentes de Cristo and its sister organizations “are closing the gap so everyone has access to resources and opportunities to improve their lives.”

The Hidalgo site is one of five that comprise Presbyterian Borderlands Ministries. The South Texas site aids asylum seekers who are now seeing an 800,000-case backup just for their hearing, Fernández said. U.S. Customs and Border Protection has announced a new phone app for asylum-seekers to schedule an appointment, but so far it’s been fraught with difficulties, according to Fernández. “Just today, I’ve heard people are being kicked off the app,” she told the board. “It will be frustrating until the kinks are worked out.”

The new process also gives people with false hope, she said. “An interview doesn’t mean they can enter the U.S.,” Fernández said. “We try to tell people this is not a guarantee.”

“More people will be arriving, and we don’t have the hands and feet,” Fernández told the board. “We have been doing this for years, and we are exhausted. When we talk about it, people don’t want to hear about it anymore.”

“The poverty of those who are turned back really breaks one’s heart,” she said, “and the Colonias here in Texas also require our attention. We are so proud to be working here … because needs are being met. God’s grace and God’s goodness flows through people and meets real needs. It makes us both proud and humble to be working with Puentes de Cristo.”

One board member asked: What’s the best way to help?

“Send supplies,” Fernández responded. “Financial support is also good. But the best way is to come and serve.” Learn more about the situation at the U.S.-Mexico border here.

Two important pieces from the PMA’s VIP process, the Center for the Repair of Historic Harms and the Office of Innovation, got a preliminary rollout on Thursday. Dr. Corey Schlosser-Hall, the PMA’s Deputy Executive for Vision & Innovation, said the latter will receive more attention during the board’s next meeting April 19-21 in Louisville, Kentucky.

The Rev. Jermaine Ross-Allam, director of the Center for Repair, joined the call from a consultation on repair and reparations going on at Johnson C. Smith Theological Seminary. He said he’s begun investigating, along with World Mission Director the Rev. Mienda Uriarte and Dr. Dianna Wright, director of Ecclesial and Ecumenical Ministries in the Office of the General Assembly, forming an international ecumenical alliance for repair and reparations. “Overall, the key concern in these fruitful engagements is the opportunity to underscore and strategize around a hard truth: no combination of individual, local, or municipal actions will either end or repair legacies of historic harms centuries in the making,” Ross-Allam wrote in a report to the board. “Only when we co-create diverse and strategic connections between religious and non-religious communities already engaged in local reparative actions will our collective activities finally form a message announcing that both the Church and our society are prepared to act on the undeniable fact that Reparations are right, necessary, and possible.”

The board also heard reports on making the Matthew 25 resources webpage easier to use, streamlining and revising the PMA’s grant process, and continuing professional development and diversity, equity and inclusion training opportunities for PMA staff.

Board Co-Chair the Rev. Michelle Hwang thanked all the presenters, noting that streamlining the grant process “is crucial to our ministry. It can be overwhelming to figure out what pocket of money could help your ministry. This work is invaluable.”

“This is the front door for a lot of people in our denomination,” said the Rev. Shavon Starling-Louis, Co-Moderator of the 225th General Assembly (2022). The work “is incredibly important and attractive and appreciated.”

The Rev. Kevin Johnson, a pastor from Detroit and a board member, recalled a conversation he had with God the day the Rev. Martin Luther King Jr. was assassinated: “God,” Johnson asked the Almighty, “what makes people so angry?”

“I’ve been drawn to the story of Jacob and Esau because of the anger of those two brothers over a stolen birthright,” Johnson said. “I don’t let Jacob off the hook so easily” because “that’s not what Jesus was doing in Matthew 25.” 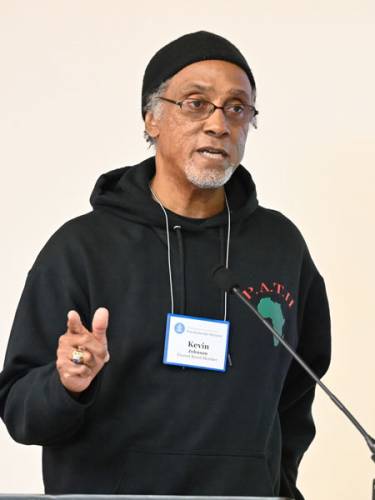 After “going through an elaborate process of conspiracy and chicanery to bamboozle his father,” Jacob flees. In Johnson’s mind, “he probably went down to the shores of Africa where he continued his stealing ways, stealing some people from their birthright. Then he probably sailed to the Atlantic and stole some land from some people. The stealing of birthrights and stories of anger and division are bound up in this story of two brothers.”

“It is God’s gift to us to be about the business of looking at the anger, the Black rage that exists in America, to challenge us as we continue to do this work of reconciliation,” Johnson said. “I had no idea I would ever be with the PC(USA), but I can’t think of a better place to be. I encourage all of you to continue to do this work. I think God is up to something, especially among those people who have benefitted most from the insanity of race in America.”

“Jacob comes to Esau realizing in order for there to be true reconciliation with his brother, there was a price to pay,” Johnson said. “It’s not theological; it’s material.”

“God’s blessing to you all,” Johnson said in his benediction, asking members of the Trinity to “continue to take us by the hand, lead us on and help us stand, surrounded by so great a cloud of witnesses, to the glory of God.”

“The way you are showing up is such a blessing,” Moffett told board members. “We do this work together. We are one church, and indeed there is lots of work to be done.”