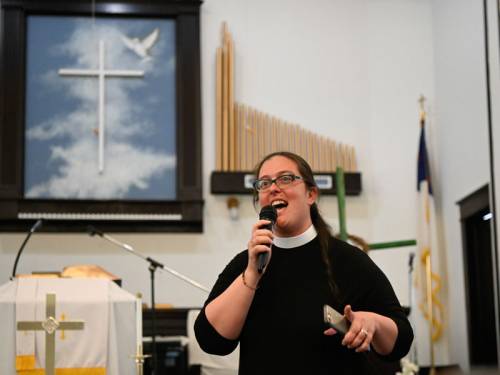 BOWLING GREEN, Kentucky — The Rev. Dr. Liz Theoharis was delivering an impromptu sermon at the end of a long, hot day riding around Western Kentucky on a bumpy bus when she turned to the story of a leper who approached Jesus.

“Now that leper had gone a lot of places up to that point. He went to the HMOs of his day, and they turned him away. He went to the hospitals nearby, they had closed down. But Jesus traveled around the land opening up free healthcare clinics, never charged a co-pay. The leper said to Jesus, ‘If you choose, you can heal me.’

“The question before us this afternoon is, ‘Do we choose?’”

The capacity and resources are available to fix many of the problems that face Americans, she said. What’s needed is a movement.

And that’s what Theoharis, an ordained Presbyterian Church (U.S.A.) minister who teaches at Union Theological Seminary in New York, has been working to build through The Poor People’s Campaign: A National Call for Moral Revival. The campaign, which she co-chairs with the Rev. Dr. William Barber II, was revived two years ago from the original vision begun by the Rev. Dr. Martin Luther King Jr. 50 years earlier and is taking on issues such as poverty, systemic racism, militarism, and ecological devastation.

The current focus of the campaign is the Real National Emergency bus tours, which have been taking Barber and Theoharis around the country along with members of state Poor People’s Campaign chapters to highlight issues in a wide variety of communities.

Riding the bus between Freeman Chapel in Hopkinsville, where she had just preached about Jesus and the leper, and the Kentucky tour’s start and endpoint in Bowling Green, Theoharis reflected on what she had seen, just in recent days: Crossett, Arkansas, where water and air pollution is poisoning the residents; Hutchinson, Kansas, where residents have to travel up to three hours to reach a hospital; and Oregon communities where homelessness is rampant and criminalized, and the homeless are attacked by police and white militias.

“To me, what’s striking is the pain and suffering but also out of those ashes, there’s the resurrection and rising, this hope and rebirth,” Theoharis said. “I find myself crying a lot, but also deeply encouraged by the potential of a movement breaking through.”

The day started in the parking lot of Bowling Green’s Mt. Zion Baptist Church, where participants — many clergy in collars and/or shawls — loaded a white bus labeled Durham School Services for the two-hour ride to the Kentucky State Penitentiary in Eddyville. En route, bus tour participants exchanged greetings and even joined in sing-alongs of some classic protest songs such as the Seekers’ “We Shall Not Be Moved” and Anne Feeney’s “The Rich Man’s House.” 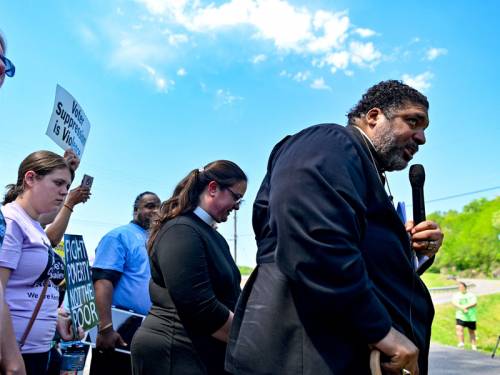 Across the street from the prison entrance, participants joined Barber and Theoharis in a rally against mass incarceration, calling for the restoration of voting rights and the end of the cash bail system, among other issues — under the watch of prison personnel and even some inmates who briefly assembled on a yard that looked out on the protest.

From there, participants rode an hour to Hopkinsville, a community where one speaker said you are either a teacher, a nurse, a farmer, “or you have a $10-an-hour job and can’t afford to live.” The town is still reeling from a February 2018 tornado that hit low-income housing particularly hard.

One of the intentions of the bus tours is for the riders to hear directly from people impacted by issues the campaign is addressing. At the stops, the Kentucky participants heard stories of a 14-year-old boy sentenced to 10 years in prison, a farmer who said immigration policy is having a negative impact on the agricultural community, a former prisoner who has seen the impact of mass incarceration firsthand, and a 7-year-old girl who said she was tired of seeing the impact of homelessness in her community.

“That was incredibly powerful, because it helps us to understand the connections between all of these issues,” said the Rev. Denise Anderson, director of the Presbyterian Church (U.S.A.)’s Racial  & Intercultural Justice ministry. “We go to Hopkinsville and we are looking at the engagement of a fairly small community, but a healthy, engaged community who refuses to allow people to be forgotten.”

And they also found communities that refuse to forget. Back at Mt. Zion, for an open-air finale featuring dinner and talks by Barber and Theoharis, Rev. John C. Lee reflected on how the community the church was in had been displaced many years before by Western Kentucky University. 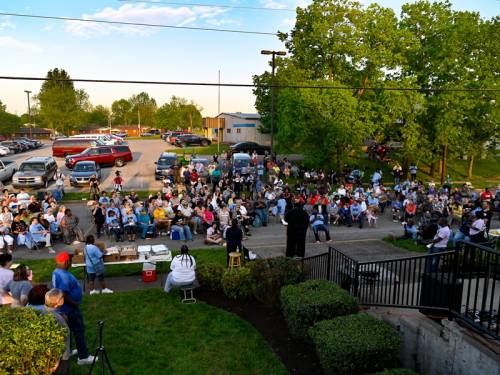 Barber, speaking at the edge of the crowd — many dining on local barbecue — started at a slow boil, saying the foundations of the nation are weak when it allows corruption and poverty to run unchecked.

“We have to build a solid foundation,” Barber bellowed, as people in the audience stood and cheered. “Kentucky, are you ready to build?!”

It’s a message that has been going out across the country, and Theoharis took some Presbyterian pride in the participation she has seen from her home denomination, noting that in the original incarnation of the Poor People’s Campaign, mainline Christian denominations were largely absent.

“Folks are ready for change and have come forward,” Theoharis said. “People are being compelled out of their life situations and then all kinds of clergy — including all kinds of Presbyterians — come on board, and not just praying, patting people on the back and offering a Band-Aid charity program. At the same time, praying for people, patting them on the back, and then passing resolutions and doing really important work of meeting of people’s immediate needs, but also being willing to engage and help lead a moral movement.”

Anderson, who Theoharis notes was very supportive of the revived Poor People’s Campaign when she was co-moderator of the 222nd General Assembly in 2016, said, “I am sinfully proud that she (Thoharis) is Presbyterian. 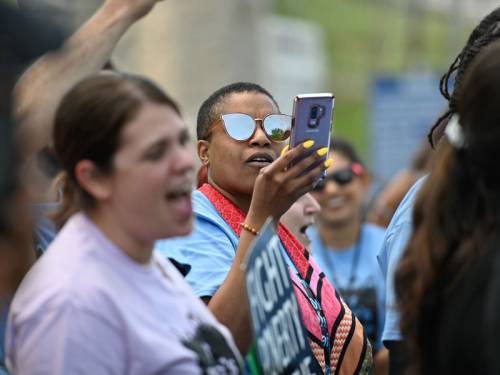 The Rev. Denise Anderson of the PC(USA)’s Racial Equity & Intercultural Justice Ministry takes photos during a rally in front of the Kentucky State Penitentiary in Eddyville during the Poor People’s Campaign: A National Call for Moral Revival Real National Emergency Bus Tour. (Photo by Rich Copley)

“I hope people don’t lose sight of the brilliance that is Dr. Theoharis and how her scholarship undergirds this movement,” Anderson said. “Not only her scholarship, but her activism. And I really want people to pay very close attention to how she furthers this work not only with intelligence, but humility.”

Noting that Theoharis will be one of the speakers at the CoInspire retreat at Montreat in October, Anderson says, “I need as many Presbyterians and people of all faiths or no faiths to listen to her as closely as they can.”

After a quarter-century in grassroots anti-poverty work, Theoharis says the last few years have been inspiring — particularly the bus tours.

“I’m learning a lot,” she says, “and it makes me even more hopeful, because you have people coming forward saying, ‘We’re hopeful.’”