LOUISVILLE – The journey from Honduras, Guatemala and El Salvador to the Mexico-United States border is a brutal, dangerous undertaking even once.

The Rev. Terri Thomas of Indianapolis was surprised to learn that many people in the trio of countries known as the Northern Triangle endure that journey over and over in what is regarded as a “cycle of migration,” trying to make new lives for themselves in the United States.

“If you undertake that journey and get sent back, to go try it again says something,” she said. “And we found that almost everyone knows someone who has tried multiple times to migrate to the United States.”

Thomas was part of a group of 24 Presbyterians and guests who traveled to Central America in the past two weeks with the Presbyterian Peacemaking Program to learn more about the conditions in Latin American countries that make people choose to travel, usually on foot, to the United States border for the faint hope of a better life in the U.S. They also heard from migrants who had been returned to their home countries and the perils they faced after they returned. 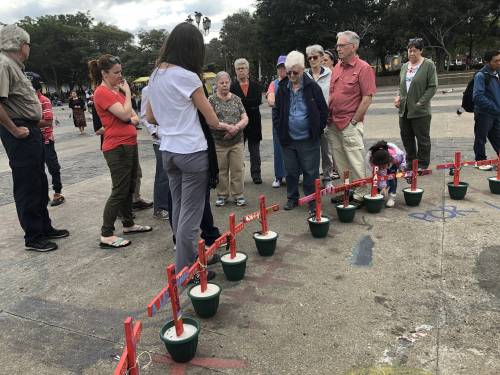 A memorial on Guatemala City’s Constitutional Plaza to the 41 girls who were burned to death on March 8, 2017 in a “safe home” outside of Guatemala City. (Photo by Carl Horton)

Ten members of the group continued on to Los Angeles this past weekend and joined others for a weekend-long travel study seminar to see what life is like for refugees just below the U.S. southern border in Tijuana, Mexico, and how the Presbytery of the Pacific is working to help people who have crossed into the United States.

But for several of the travelers, the journey was coming to an end when they returned home from Central America. Some, like Valerie Young, the synod leader and stated clerk of Synod of the Sun, have experience in border communities.

“I came to get a little more understanding,” Young said from Honduras on Thursday, the last day of the trip. “It helped me to understand where the asylum seekers are coming from, and the reality of their desperation.”

For Larry Hjalmarson, a member of the United Methodist Church from Salt Lake City, the journey was a chance to see his daughter Dori Hjalmarson, a mission co-worker in Honduras for Presbyterian World Mission. But, even having worked before in Central America, he was surprised by many of the things he heard, particularly about the journey many people take.

“I will remember how these very vulnerable people are preyed on every step of the way,” Larry Hjalmarson said. “The extortion by the gangs, the government working against them, and then if they make it to the border, they suffer even more abuse.”

Steve Myers of Austin, Texas, came at the trip from a distinct angle.

“My purpose coming was to look for solutions — ways we can bring U.S. systems down there to eliminate the need to immigrate, because we can’t take everyone,” Myers said.

While that may even be a mutual desire, the trip’s participants noted they saw barriers to economic advancement, from government and business forces. Larry Hjalmarson said that in coffee production, farmers do the bulk of the work but see the smallest slice of the profits after distributors and governments take their shares.

Several trip participants said they were sad to learn some of the ways in which the U.S. government and businesses have contributed to the citizens’ plight, from propping up oppressive regimes to companies coming in to take advantage of cheap resources.

Young noted that many people see the United States as tantamount to the Roman Empire of the New Testament. Still, she notes, people want to come to the U.S.

While the group did find that dire economic conditions led most people to immigrate, violence and gangs were also a major factor for a lot of people.

Thomas said they learned there were two ways to get out of a gang: die or go to church.

“A gang will let you go if you go to church and you are an active Christian,” she said. “Somewhere in there seems to be the message that there are answers in faith.”

A consistent message they heard, Thomas said, “is that God and faith keep them going.”

For her part, Dori Hjalmarson said that she appreciates Presbyterians taking the time and effort to travel to see the situation where she works. 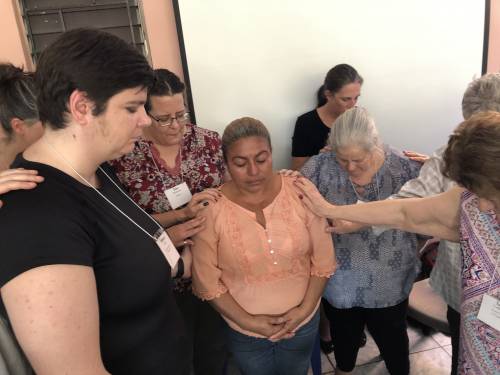 Group prayer for Juana, a returned migrant who shared her migration story with our group. The meeting took place at IRCES, the Reformed Calvinist Church of El Salvador. (Photo by Carl Horton)

“It can be frustrating telling people that this is a problem here and seeing people shut down, that they’re not listening,” Dori Hjalmarson said.

The difficulties of life in Central America were not lost on the travel study seminar participants who endured grueling travel and sometimes spartan conditions — at one point, the travelers said “cold showers!” in unison. But they also recognized that while this was their temporary hardship, it and harsher conditions were a way of life for many of the people they were meeting.

“I’ve been smacked in the face with privilege,” Young said.

Even the fact that they were free to travel with U.S. passports and knew that they would soon fly home to a completely different world was not lost on them.

Larry Hjalmarson said he will go home ready to call out myths about immigration when he hears them. Young said it will put a whole new dimension on a border trip she is leading in April.

“I will be talking about this a lot,” she said. “I don’t like to write, but I will be writing about this, telling the story, encouraging people to hear the truth.”

And even with the rough days, participants said the travel study seminar was well worthwhile.

Thomas said, “I would absolutely recommend it. I don’t think there’s anything like hearing a person’s story face to face and crying with them.

“It opens your mind and your heart.”

Note: The Presbyterian Peacemaking Program had planned a travel study seminar to explore migration in the Philippines and Hong Kong for May. That trip has been postponed until June 4–18, 2021, due to the coronavirus outbreak and other concerns. Applications for that journey are open.

Your gifts to the Peace & Global Witness Special Offering support the work of the Presbyterian Peacemaking Program.