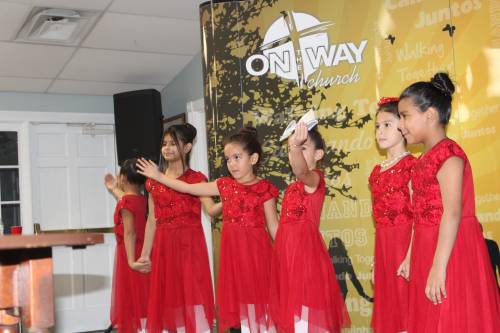 LOUISVILLE —  During Sunday’s one-year anniversary celebration of On The Way Church, the Rev. Rafael Viana began to see a convergence of many things.

“Each one was necessary, for us to reach this moment of great blessing,” he said.

Viana arrived in Atlanta with his wife Ivette and their two children in February 2016. Together they hoped to start a new church. Even as a teenager, Viana had felt God’s call to ministry.  When he started seminary in Brazil, he met Ivette. A Bolivian, she was in her final year of theological studies after being a missionary in Chile.

After getting married in 2000 and graduating from seminary, they worked as church planters in Rio de Janeiro, Brazil.

On their first Sunday in Atlanta, they visited the El Nazareno Presbyterian Church in Hapeville, Georgia. By happenstance, the Rev. Lindsay Armstrong, who is the director of new church development in the Presbytery of Greater Atlanta, was visiting that day.

When they met afterwards, they discovered they were neighbors.

“It was incredible to meet her that way,” Viana said. “From that moment on doors opened — and we never doubted God’s will for our lives.”

Within a few days, over breakfast, Armstrong began to dream with the Vianas — and to lay the groundwork for them to plant a new church, in the Atlanta area, for Latino immigrants.

“If it appears that you might be undocumented, our region is one of the most difficult places for to live,” said Armstrong. “ICE (Immigration and Customs Enforcement) has the second most activity in the country here — second only to El Paso.”

As On The Way Church defined its mission, the church began to receive support from the Presbyterian Church (U.S.A.)’s 1001 New Worshiping Communities movement in the form of financial grants, training and coaching.  The church officially opened a year ago at Fairview Presbyterian Church in Lawrenceville, Georgia.

“They looked upon us with love,” Viana said, “and embraced our mission as part of them.”

As the celebration service unfolded in Fairview’s fellowship hall — where there was standing room only — the joy was palatable.

Walking in, people received markers so that they could sign quilts sewn for the occasion.  Teenagers made their musical debut — girls were dressed in red sequins — and a woman wrote a song for the occasion.

“It was so much fun,” said Armstrong. “We’d been celebrating for an hour and half before anybody thought about scripture.”

As she preached from the text of Nehemiah 6:3, where the prophet proclaims, “I am doing a great work and I cannot come down,” Armstrong encouraged this first-generation community that is largely from South American countries to stay focused — on building a cultural pluralistic community in ways that neighbors would know God is at work in them.

“Just like Nehemiah’s community, they know a lot about intimidation, assault, rumor, economic hardship and relentless demands,” Armstrong said. “Yet their focus, diligence and commitment to their community is substantially changing lives.”

Viana was thinking about this during the celebration. In their first year, a woman in their community got injured and was left without work.  Along with her four children and an older grandmother, she was evicted from her housing.

Viana remembers the woman coming to his door, crying. They had nowhere to go. Working together, On The Way Church helped make the eviction less traumatic for the children. Somehow the family managed to move on and rent a new home. Recently, this woman told Viana something profound.

“She believes God exists,” he said, “because she saw the real love of God in our lives.”

Viana also was thinking about their New Beginnings project, where they teach community members English and music on Friday nights. Older adults are overcoming their barrier of shame and fear of speaking English. Teens are discovering new passion for the arts. Young people talk about how they have overcome bullying and prejudice through their faith in Jesus Christ.

“They are a lifeline for folks,” Armstrong said, “a community that is with them in the really dicey times.”

“Despite all the barriers” — folks from Spanish-speaking countries; from Brazil, where Portuguese is spoken; and children who prefer to speak in English — “God has made us a family,” Viana said.  “Deep friendships have been formed under the basis of the love of God in Christ.”