…be led forth in peace. (Isaiah 55:12). Support to the Peace & Global Witness Offering.
Make A Donation Click Here >
Home › Ministry at the intersection of racism and poverty

Co-moderators commend new book: ‘Always With Us? What Jesus Really Said About the Poor’ 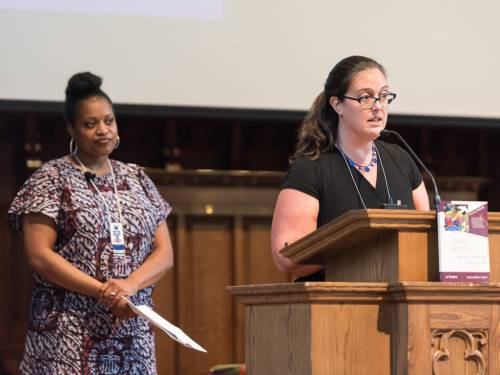 Liz Theoharis (right) speaks about her book “Always With Us” as PC(USA) co-moderator T. Denise Anderson looks on at the Big Tent 2017 Friday afternoon plenary. (Photo by Gregg Brekke)

ST. LOUIS – By a show of hands, a large portion of those attending a Big Tent plenary Friday afternoon (July 7) indicated they had at least read Waking Up White by Debby Irving, a book about white privilege recommended to the church by General Assembly Co-Moderators Jan Edmiston and T. Denise Anderson.

“What we are invariably asked,” Anderson said, “is ‘What do we do now?’” Anderson and Edmiston have decided to take the Presbyterian Church (U.S.A.)’s anti-racism efforts a step further: to the intersection of poverty and racism.

“We need to pay attention to how racism makes its way into entire systems,” said Anderson. She identified systemic racism as “skin color symbolism plus favoritism plus power.” She added “Racism is systemic because it intersects with so many other aspects of life.”

To help Presbyterians explore this intersection between racism and poverty, Anderson and Edmiston have commended another book for churchwide study: Always With Us? What Jesus Really Said About the Poor by the Rev. Liz Theoharis.

Theoharis, who was raised Presbyterian, said that for her “the call to anti-poverty work is a religious one.” Her determination to write Always With Us grew out of the constantly misinterpreted Matthew 26:11: “the poor you will always have with you.”

The choices, Theoharis insisted, “are not to either die or rely on primarily church-based charity programs. A quarter-million people die every year from poverty-related causes in the U.S. and too many Christians justify that theologically.”

Jesus was not, she continued, “insinuating that poverty is inevitable, but was reminding us of our failure. Remember, how you treat the least of these is how you treat God.”

Anderson and Edmiston’s commitment to help the PC(USA) engage in more anti-poverty work was buttressed by the 222nd General Assembly (2016) which approved an overture from Cascades Presbytery calling on the denomination to “recommit ourselves at all levels to locate ourselves with the poor, to advocate for the poor and to seek opportunities to take risks for and with the poor.”

“The Assembly,” said Edmiston, “gave us a platform to invite the church to study and dialogue … and to action.”

“We hope the PC(USA) will be instrumental in the New Poor People’s Campaign,” Edmiston urged.

People want to be a part of life-changing efforts, Edmiston said. “That’s how we’ll get young people back in the church — a question I’m asked constantly, and how we’ll grow churches — by attracting whole families who want to be part of our ministry of transformation of the world.”