Guests call for an end to a history of pain 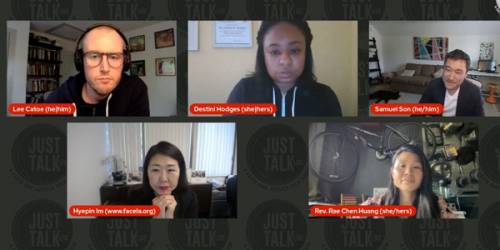 LOUISVILLE — On the eve of its one-year anniversary, “Just Talk Live” took on the topic of AAPI hate, with a trio of guests who affirmed that racism against Asians, Asian Americans and Pacific Islanders is nothing new and that the church has a role to play in stopping it.

The Presbyterian Church (U.S.A.) program spotlighted the topic amid a rash of anti-Asian hate and violence in recent months as well as earlier in the pandemic.

A gunman charged with killing eight people at three Atlanta-area massage businesses in March has told authorities that sex addiction, not race, was behind the shootings, according to news reports. But many people believe there was a tie, given that six of the people who died were women of Asian descent.

The Georgia case and other violent incidents have “brought to the surface this hate toward the AAPI community that’s kind of always been there and that people are very ignorant of,” said the Rev. Lee Catoe, a “Just Talk Live” co-host.

During Tuesday’s show, the featured AAPI guests described the country’s long history of disparaging and mistreating their people.

“Asians were hated the first second they laid their foot on this land,” said the Rev. Samuel Son, manager for Diversity & Reconciliation for the Presbyterian Mission Agency. “They were called the Yellow Peril” — a reference to being a so-called threat to Western civilization — and stereotyped in various ways over the years.

A long list of injustices includes Japanese Americans being forced into internment camps in the 1940s, lynchings, and Chinese American Vincent Chin being beaten to death in Michigan in 1982, according to the “Just Talk Live” guests.

Chin was killed by two white men during a time of strong resentment against Asians that stemmed from the success of the Japanese auto industry and layoffs of U.S. workers. His assailants received minimal punishment, sparking an outcry that included one activist calling their $3,000 fine a license to kill Chinese Americans, Son said.

As long as that kind of narrative persists in the United States, “of course, people will think it’s okay to go down the street, kick, punch, beat, kill Asians,” Son said.

Further damage is done when issues affecting their communities are left out of key discussions, Im said. For example, some Asian communities have been hard hit by the health and economic effects of COVID-19, she noted, but that hasn’t received much attention.

“When our pain continues to be erased and left out of initiatives and invitations to those discussion tables — decision-making tables — I think that is what allows the perpetuation of the racism against the Asian community,” she said. 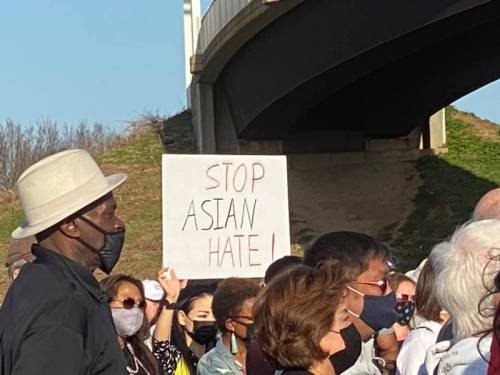 A crowd gathered at Louisville’s Waterfront Park last month for a vigil in support of the AAPI community. (Photo by Darla Carter)

She called on the church to help bring about change through advocacy, leveraging its relationships and position of trust, and providing a safe place for AAPI people to speak out.

“You have the power to help us to stop this pain,” she said.

The Rev. Rae Chen Huang, an ordained teaching elder in the Presbyterian Church (U.S.A.) who’s also a community organizer in Los Angeles, highlighted the role of capitalism and how it has been involved in the oppression of many minority groups, from Asian and African Americans to Latinx people and Native Americans.

It’s “an economic structure by which we are there to serve somebody else, not ourselves, not God,” Huang said. “We’re there to fulfill the pleasure and the need of another person, of another power. We’re there for profit, for your fetishism, to do your labor in a cheap way, to be quiet and to follow instruction, whatever it might be. And so if you’re starting to be a little bit too loud, we’re going to replace you with somebody else. That’s what we’re going to do. And this is the history of these racial tensions that we have throughout the U.S.”

Huang urged fellow Asian sisters and brothers to confront their own biases as well, noting, “We have anti-blackness and racism in our own communities,” she said.

She also talked about the need to recognize how “intersectional oppression is.”