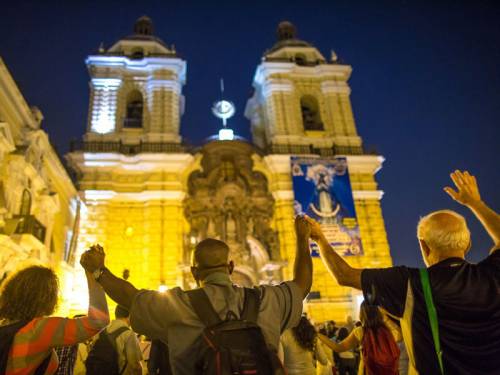 Joining Hands challenges systems that contribute to hunger, poverty and injustice. It helps build synergies in communities and support networks made up of various organizations. (Photo by Joe Tobiason)

LOUISVILLE — From advocating for the people La Oroya in Peru to fighting for farmers’ rights in Haiti, Joining Hands has been an international force for change for the last two decades.

The initiative, which is part of the Presbyterian Hunger Program, grew out of a desire to go beyond small acts of charity to address long-term problems in communities around the world, said Valéry Nodem, an associate for international hunger concerns for PHP.

While grants to address community needs are important, “there’s no way with a grant of $10,000 you’re going to tackle complex issues like corruption” in a given country, Nodem said. Joining Hands is a means by which “we can take the time and really study what’s happening” how policies and corporate practices are “affecting people’s lives overseas and in the U.S.”

Over the years, Joining Hands has been active in about 10 countries and currently has a presence in seven: Cameroon, Democratic Republic of Congo, El Salvador, Haiti, India, Peru and Sri Lanka. 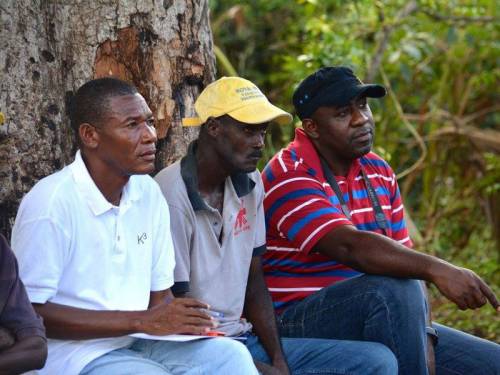 Farmers in Haiti were evicted from their lands by projects to create an industrial zone. FONDAMA, the Joining Hands network in Haiti, has been supporting them in their struggle. (Contributed photo)

Rather than dictating to indigenous communities, “it’s a ministry of listening and discerning and hearing what’s needed,” said the Rev. Ellie Stock, a retired pastor who collaborates with Joining Hands through the St. Louis-based Presbytery of Giddings-Lovejoy. “It’s not that we don’t have suggestions, or things like that, but we’re not doing a Lone Ranger, ‘We have all the right answers,’ kind of thing at all.”

At its heart, Joining Hands challenges systems that contribute to hunger, poverty and injustice. It does this by building synergies or connections in communities, and supporting networks, consisting of various organizations, to harness their collective power. 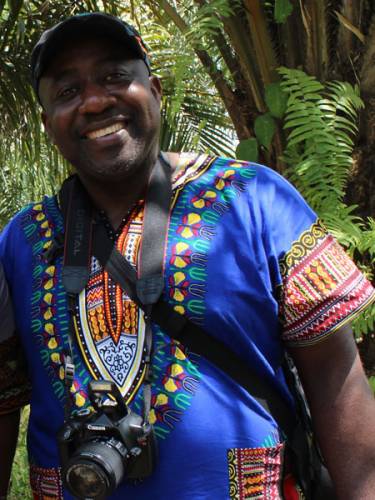 Joining Hands is a means by which “we can take the time and really study what’s happening,” including how policies and corporate practices are “affecting people’s lives overseas and in the U.S.,” said Valéry Nodem, an associate for international hunger concerns with the Presbyterian Hunger Program. (Photo by Rick Jones)

These are “churches, nonprofits, local community groups in the same country coming together and forming a network,” Nodem said. “When you do that kind of work — when you’re questioning and challenging — it’s better to come together than to come as one single organization.”

For example, “if you challenge a big corporation like ExxonMobil as one nongovernmental organization, you can be crushed,” he continued. “If you’re coming together with five churches, a couple of nonprofits who are experts on the issue — in a lot of ways, you’re stronger. You’re more protected because there’s not just one single person.”

Very often, the Presbyterian Hunger Program and World Mission will send a mission co-worker in the countries where Joining Hands is active facilitating dialogue, relationships and action between Joining Hands networks and congregations in the United States.

Nodem, who grew up in Cameroon, first became involved with Joining Hands in 2003 when the Network to Fight Against Hunger (RELUFA) was beginning.

Working with RELUFA gave Nodem the chance to start traveling within his country and to see how rural people were suffering — as a result of governmental and corporate practices — despite living in communities that were rich in natural resources.

“Working with Joining Hands was really an eyeopener,” Nodem said.

During his time with RELUFA, the network was instrumental in advocating for Cameroonians who were owed compensation for damage to homes and communities that occurred when a pipeline was constructed through the country from neighboring Chad.

When ExxonMobil claimed that the bulk of the affected people had been properly compensated, RELUFA traveled to numerous villages, documenting the experiences of hundreds of people — and eventually getting the company into talks and resolving lots of people’s concerns, Nodem said. Later, the network gained confidence to broaden the conversation to include transparency issues in Cameroon.

The Presbytery of Giddings-Lovejoy has had a relationship with the Joining Hands network in Peru (Red Uniendo Manos Peru) for 20 years.

“I think it (Joining Hands) needs to be celebrated as a way of trying to address so many of the issues,” including some related to climate change, said Stock, the retired pastor.

In the United States, “we’re going to be dealing with the same things here, whether we want to or not, and we need to have the wisdom from people all over the world, working on these things together,” she said.

The Missouri presbytery and Joining Hands have worked in collaboration with various partners to tackle environmental, economic and human-rights issues in Peru. Addressing pollution from mining activities has been a major focus in the town of La Oroya.

“The network has worked a lot to document contamination of the water, soil and all of that for so many years, working with the Presbytery of Giddings-Lovejoy,” Nodem said. Also, the presbytery has “sent people down and they have brought partners here (to the United States) as well.” 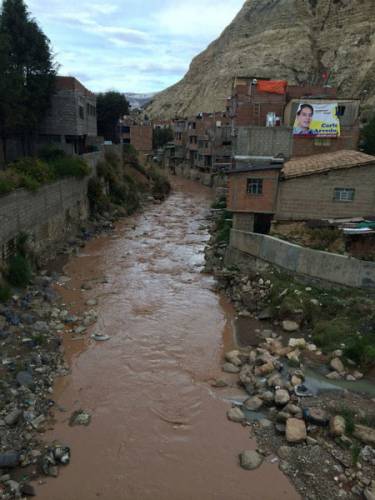 La Oroya is a small mining town in Peru. Toxic emissions and waste have resulted in high concentrations of lead poisoning, especially among children. (Photo by Rebecca Barnes)

Stock recalled in an email, “We first started to advocate for the health of children in the Andes Mountain town of La Oroya, where 97 percent of the children were severely lead/heavy-metal poisoned by a U.S.-owned, St. Louis-based company’s metallurgical complex (smelter).

“Soil, air, water, animals, vegetation and humans were chronically contaminated, affecting the health, livelihood, and well-being of the whole community as well as the surrounding communities affected by the contaminated Mantaro River running through La Oroya,” she said.

Various efforts ensued to “make sure the company (Doe Run) would accept its responsibility and compensate people,” Nodem said.

As it turned out, Doe Run also ran a smelter in Herculaneum, Missouri, which led to advocacy work right in the presbytery’s own backyard.

“The community there was experiencing the same issues as the people in La Oroya,” Stock said, “so we brought together people in both communities to tell their stories and work together for the rights of their communities to have air, water, soil, and life free of contamination.  Some people from Herculaneum testified before the Peru Congress about what Doe Run was doing in Herculaneum.”

The Presbytery of Giddings-Lovejoy is organizing a trip to Peru in August that essentially will be “a pilgrimage to celebrate 20 years of Joining Hands and what we have been able to achieve so far,” Nodem said.

Their partnership is a reflection of what Joining Hands seeks to continue doing as a ministry while walking alongside people who are trying to make a better life for themselves and their communities.

“This ministry is calling the church to come together and unite forces with our brothers and sisters around the world to work together to tackle issues that affect all of us,” Nodem said. “If we do it together, we’ll do it better.”

Stock said she hopes to see the initiative continue for years to come, as the church strives to dig deeply into issues. This is what it means to “be the presence of Christ in a way that’s not superficial but impacts communities and creates the kind of equal partnerships that are so needed in this world,” Stock said.