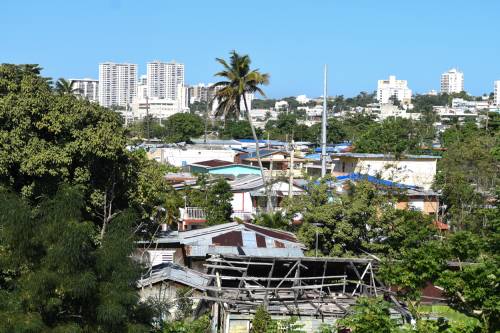 Many homes in the area of Caño Martín Peña still have blue tarps for roofs, 15 months after the destruction of Hurricane María. (Photo by Rich Copley)

Mere blocks from where cruise ships pull into San Juan terminal, visitors can find enticing Old San Juan, with its mix of history, shops and restaurants, all open for business, even on a warm but quiet Tuesday night. Veering right, visitors can find conveniences such as bike rentals and a CVS pharmacy, all up and running.

“People go to hotels, Old San Juan and they see the stores open, lights … and they say, ‘Oh, everything is back to normal,’” the Rev. Edwin A. González-Castillo says. 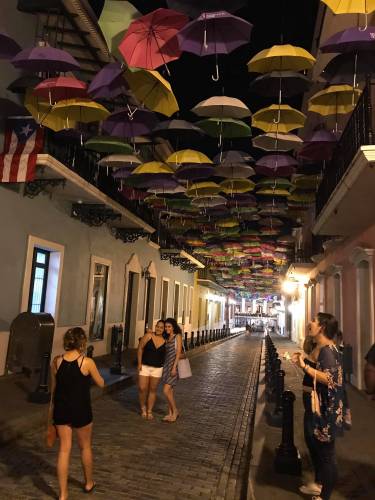 Tourists enjoy the umbrella art installation on the path to the Governor’s Mansion in Old San Juan, Puerto Rico. (Photo by Rich Copley)

You don’t have to look far to discover how far from normal this United States territory is 15 months after being ravaged by Hurricane María, which was a high-Category 4 storm when it made landfall in Puerto Rico on Sept. 20, 2017. It’s considered the worst natural disaster on record for the island and the worst Atlantic hurricane in more than a decade.

Just a five-mile, 10-minute drive from historic old San Juan you find the eight communities surrounding Caño de Martín Peña, where many homes are still covered by the blue tarps they were given after having their roofs blown away in the storm. With that orientation, it’s easy to wonder if every crippled structure or blown-out window in the city is the result of storm damage.

Head out into the island, and there is plenty of evidence this storm struck barely over a year ago, from ravaged vegetation to structural debris to roads still in need of repair after damage from wind and flooding. 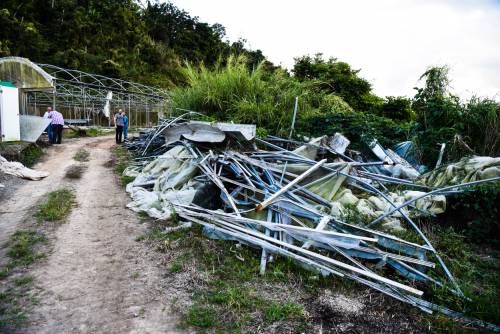 A delegation of representatives from Compassion, Peace & Justice ministries in the Presbyterian Mission Agency visited Puerto Rico in the middle of December to check on some projects they are currently supporting and explore new possibilities for support.

The delegation included leaders of Presbyterian Disaster Assistance, Self-Development of People, and the Presbyterian Hunger Program, all ministries supported by the One Great Hour of Sharing Special Offering.

Click here to contribute to One Great Hour of Sharing.

“I don’t know if I should be heartened by how determined they are to recover or angry at how little help they have gotten,” says Bryce Wiebe, director of Special Offerings, referring to government support.

Self-Development of People coordinator Alonzo Johnson says, “There was a determination that could not be matched. Anytime the storm was mentioned, people were in tears. The impact of María was real in the faces of the people.

“There was a lot of desperation, but I did not get a sense of hopelessness. It was like, we are proud people, and we will continue to do what we do.”

Presbyterian Hunger Program Associate for National Hunger Concerns Andrew Kang Bartlett observes, “These are brave, rugged and adaptable people who have not given up on the island they love, nor on each other.” 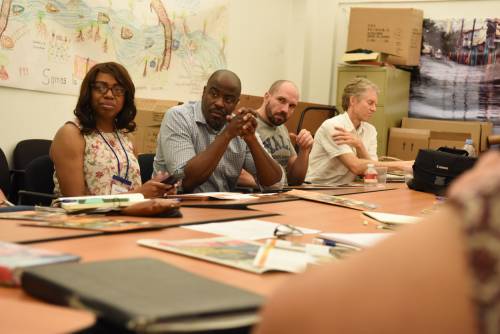 The Presbyterian group met with organizations from San Juan in the western mountain town of Guacio to hear what has been done and what projects are underway to revive and improve their situation. Some of the meetings were emotional, like a community leader in Guacio tearing up describing the struggle of the past year.

González-Castillo, who was a pastor in Vega Alta and Stated Clerk of the Presbytery of San Juan when María struck and is now Associate for Puerto Rico Recovery for Presbyterian Disaster Assistance, says that while people put on a brave face, especially for visitors, you don’t have to scratch too deep to find those fresh emotions.

“Inside, they’re destroyed,” he says. “They’re tired of waking up every morning to figure out how to lift themselves and their families out of their situations.” 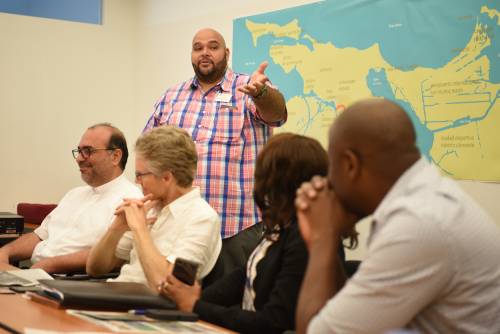 Recovery, González-Castillo says, is very much tied to income and social status, with a lot of the government’s priority going to highly-visible areas of San Juan and other population centers. The island has also suffered from neglect by the Federal Emergency Management Agency (FEMA), which he says has hired “in many, many cases, inefficient contractors” to carry out many recovery jobs — among them delivering meals to repairing homes. He also points out that many citizens have trouble finding help because of poorly marked FEMA offices and most information being online, where people without computers or electricity can’t access it.

Read Edwin A. González-Castillo’s thoughts on the government response to Hurricane María in Puerto Rico in Unbound.

In many communities, González-Castillo says churches were the first responders to the disaster and remain primary players in recovery, from local congregations to national organizations like the Presbyterian Church (U.S.A.).

Jim Kirk, Associate for National Disaster Response for Presbyterian Disaster Assistance, was on his third trip to Puerto Rico and noted that he has moved from working with government, community, and church leaders in the beginning to more one-on-one interactions, which has been revealing.

“Fifteen months is sticking in my mind,” Kirk says, driving the twisting mountain road from Lares to Guacio. “It’s been 15 months and a woman in Vieques is still putting pots around her house to collect water that leaks through the roof that FEMA was supposed to have fixed.”

Kirk notes that in many cases, the hope is not just to help the island recover but make it better than before. While there, the group saw projects like an effort to put new, hurricane-proof roofing on homes that had lost their tops in the storm. Bartlett noted that the disaster had highlighted the island nation’s dependence on imported food. Farmers he met were serious about building a resilient local food system.

“They were really inspiring,” Boone says. “If people in our congregations could meet them, they would want to support them.”

The Special Offerings staff also said it was inspiring to see the disaster, hunger, and self-development teams working together to try to address a huge issue.

“The media has made Puerto Rico look incredibly vulnerable,” Johnson says. “But to have these conversations and to go, you see the determination is real there. They’re surviving and standing strong. There’s the tears, but there’s also, ‘We’re going to do this. We’re going to rebuild and restructure and revitalize.’

“It was incredibly contagious.”

Read about a Puerto Rican couple struggling to revive their farm so it can provide employment to the community.