Farmers employed nearly a dozen workers before Hurricane María. They want  to revive the business for the community 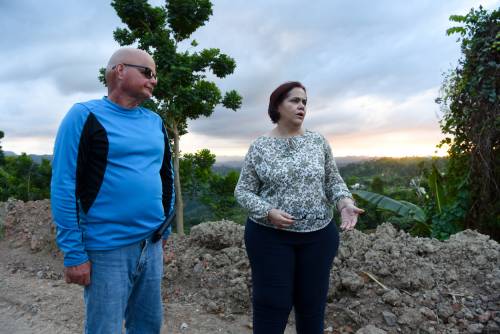 César Oliver and Lourdes Perez’s farm in Lares, Puerto Rico, was devastated by Hurricane María in September 2017. They are struggling to rebuild to provide jobs for seniors in their community. (Photo by Rich Copley)

LARES, PUERTO RICO —  It’s been 15 months, but the mere mention of the devastation causes Lourdes Perez’s chin to tremble. Tears fill her eyes.

Everything was lost. The coffee trees. The plantain trees. Everything from the farm she and her husband, César Oliver, had been building for more than three decades.

You don’t have to look far to find evidence of Hurricane María’s wrath on Hidropónicos César y Lourdes’ farm in the steep mountains of this northwestern Puerto Rico town. Twisted metal lies on paths cut through the farm. Some structures are still broken and tattered, and on a tour through the property, Lourdes will describe what certain sections once had, punctuated by the refrain, “but it’s not there anymore.”

There is also modest evidence of revival, from building materials to sweet pepper marmalade, Lourdes and César’s attempt to create a little revenue in the aftermath of the storm. 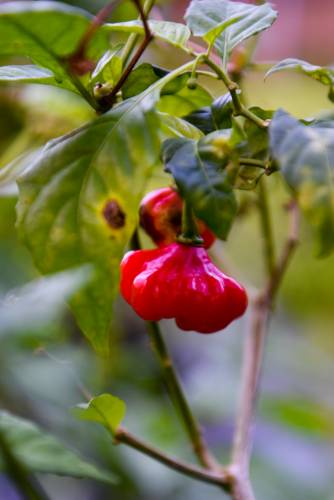 Sweet Puerto Rican peppers are used in sweet pepper marmalade, which César Oliver and Lourdes Perez are making in an effort to generate revenue for their farm in Lares, which was devastated by Hurricane María. (Photo by Rich Copley)

“The most important thing that we need to do is rebuild the farm so we can again give the community a place in which it can work,” Lourdes says.

Before the storm, the farm employed around a dozen people in the community — primarily seniors who don’t have many sources of income in the mountainous region.

“The reason you see them cry so many times is it’s not the same when you lose part of your house, because it’s just your house, and it’s sad, but it may be just you … but in this case, it’s the jobs of 11 people in that community, 11 families being affected,” said Edwin A. González-Castillo, a native of Puerto Rico now working for Presbyterian Disaster Assistance to find partnerships for the church in the hurricane-ravaged territory. “So, the responsibility they have on their shoulders is big and I saw that in the way they talked: they’re desperate to rebuild because they need to provide for those families who are left without a job.”

González-Castillo led a group of representatives from ministries in the Presbyterian Mission Agency on a visit to the farm Dec. 12 to see how the church might be able to assist the couple revive the farm.

“This is the kind of thing that speaks to us, because the way I read it is, every dollar you give is a dollar added to community resilience,” says Jim Kirk, associate for disaster response (U.S.) for Presbyterian Disaster Assistance. “If people are meaningfully employed, seasonally employed, if there’s better food security, it’s just a win-win across the board. As opposed to handing someone food to deal with immediate hunger, you’re giving them tools for long-term security.”

Click here to give to One Great Hour of Sharing.

The farm was one of many projects visited by the group and will be considered as a potential partner as the three programs discern how to best support the recovery in Puerto Rico. 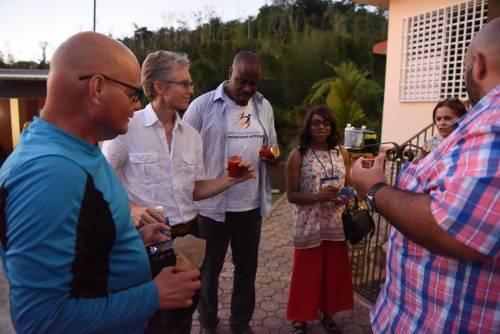 One possibility, Kirk said, is establishing a Presbyterian Volunteer Host Site at nearby Camp Guacio, where there’s potential for volunteer groups to come lend a hand rebuilding the farm. While some of the work must be done by trained professionals, there are also jobs for volunteers to do to revive the struggling farm.

Across the board, the visitors said they were struck by the couple’s resilience and commitment to the community.

“You get this sense of hope, and it is real hope,” said Alonzo Johnson, director of Self-Development of People. “It’s not a blind hope. It is a hope that is deeply rooted in action.

And they could have, easily. After the storm, César and Lourdes could have left Lares.

Special Offerings director Bryce Wiebe recalled Lourdes talking about being re-energized by a man who visited them after the storm. It wasn’t because he could offer help, but because he needed food.

“What comes to our door is not the savior with all the answers, or the quick fix,” Wiebe said. “Jesus shows up with the need that must be engaged.”

Lourdes’ family is from Boston, but they spent a lot of time in Puerto Rico. When she and César married 32 years ago, they opened the farm his uncle once owned. They eventually began hydroponic farming, growing plants in a nutrient-rich solution as opposed to soil.

At the time of the hurricane, the farm was operating completely on solar power. The storm damaged one of their banks of batteries, but they still largely use solar to power a community washer and dryer as well as a refrigerator to keep insulin cold.

After the storm, they had offers to leave. Friends in Oklahoma offered the couple land so they could start over there and get away from a situation that, 15 months on, has improved only marginally. 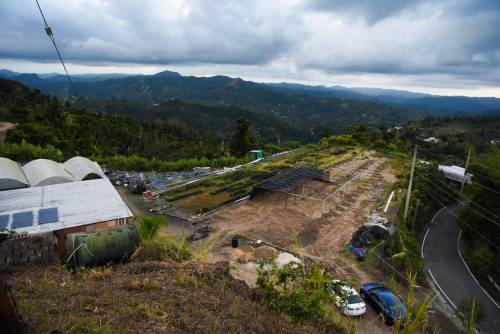 At one time, the couple’s farm operation employed nearly a dozen people, many of them seniors. (Photo by Rich Copley)

Since the storm, the two have devoted themselves to rebuilding the farm, with little help from the government. Lourdes says the first outside entity to visit was CNN.

Kirk says, “I think this is what often gets lost in a government response, because they come in primarily from the outside and they set up what the needs are and then set up the intervention, rather than seeking out these kind of partnerships, and it’s obvious that farm was a meaningful part of the community before María ever hit. Why not resource them and help them build up the capacity to do more good work?”

And they need substantial help to rebuild structures and re-establish crops.

“I was just struck by the extreme challenges that they are facing,” said Andrew Kang Bartlett of Presbyterian Hunger Program. “One obstacle after another, and they had quite an operation there. It’s pretty impressive what was there.” 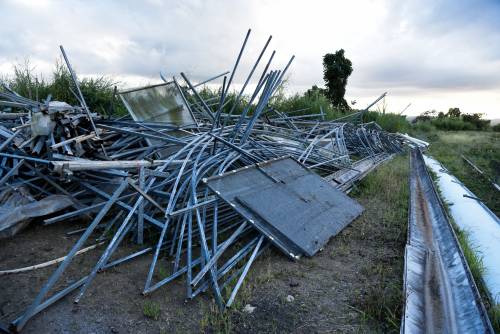 Margaret Mwale, associate for community development and constituent relations for Self- Development of People, said, “Their single-minded devotion to helping the community and the well-being of the community was impressive.”

But there was another devotion that holds the farm together, in evidence during the Presbyterian Mission Agency visit.

“She is the reason for this,” César says. “Without her, it would be nothing.”

Lourdes responded, “He’s my hero,” as they embraced.