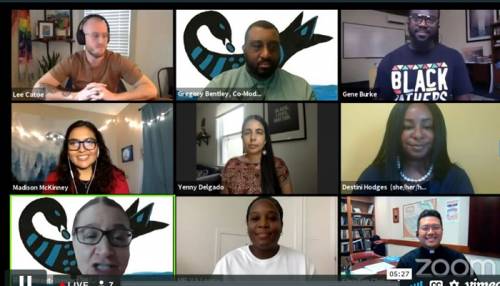 A Young Adult Roundtable held Friday was part of the Presbyterian Week of Action. (Screen shot)

LOUISVILLE — Young adults with a desire to see the Presbyterian Church (U.S.A.) move forward say they’re running up against a wall when they try to approach older members about sensitive issues, such as institutional racism and bias against queer people.

Being in a church system and structures intended for whites is “a tense and a hard space to be in and to pose these questions,” said Melva Lowry, a ruling elder in the Presbytery of Greater Atlanta.

Her message to “white America in general is stop running away from the conversation and then looking back and saying, ‘Get over it,’” she said. 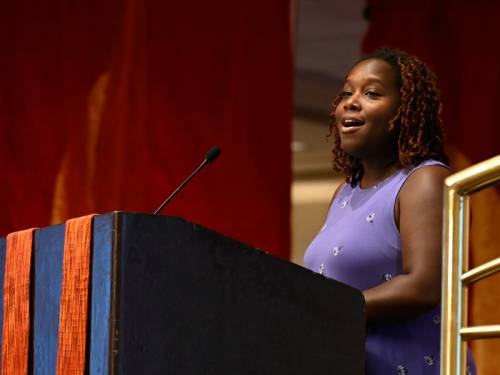 After all, “we can’t get over something if we don’t talk about it,” said Lowry, a recent Hands & Feet Initiative fellow. “You’ve got to acknowledge it before you can move past it.”

Lowry was one of the participants in a Young Adult Roundtable held online Friday as part of the denomination’s Week of Action, affirming that Black lives matter.  Elona Street-Stewart and the Rev. Gregory Bentley, co-moderators of the 224th General Assembly (2020), served as facilitators.

During the discussion, Madison McKinney, a ruling elder at First Presbyterian Church in Lawrence, Kansas, called for greater understanding.

“I think a lot of times white people look at Black and Indigenous People of Color that are fighting for anti-racism that, you know, it’s our problem, like we’re the burden that wants to see change,” she said. “But that’s not the case …. This is our faith calling us to be better humans and it just so happens to coincide with the work of anti-racism.”

Fellow panelist Yenny Delgado, a ruling elder in the Washington, D.C., area, talked about the frustration of trying to pose challenging questions to older people.

“Every time I try, personally, I see a wall, a huge wall,” said Delgado, who is from Peru and serves as a member of the PC(USA)’s Advisory Committee on Social Witness Policy. The feeling seems to be that “we want to grow and have many members but at the same time I don’t want to have any questions about how we administrate the church.”

Destini Hodges, an associate for recruitment and relationships for Young Adult Volunteers,  encouraged young people like Delgado to seek support from welcoming parts of the PC(USA). “Too many times we try to fight these battles in silos and we just need to stop,” she said, adding that it’s also time for people to get beyond their pride and titles to make progress.

“I am hopeful that we are going to move out of this season of lament and come together as young adults to press this denomination forward,” she said.

The Rev. Christian Choi, a panelist who serves as an associate pastor for family ministry at Westminster Presbyterian Church in Springfield, Illinois, said today’s young people have an edge over their older counterparts because they’ve grown up and formed friendships with people who are different from themselves.

“I can name so many people who I treat as my own brothers,” even though they may be a different race or ethnicity from him, he said.

Bu Lee Catoe, editor of Unbound, an interactive journal on social justice, noted that there are young people in today’s society who’ve been indoctrinated with racist and white supremacist views.

“Growing up in rural South Carolina, I know all too well that rhetoric … how that is being taught, how that’s being formed, how that’s being seen as the only narrative that we learn as white people,” Catoe said. “It is this racist, white supremacy culture.”

As an example, he mentioned a teen charged with shooting three people — two fatally — during protests that broke out in Wisconsin after police shot Jacob Blake, who is Black, seven times from behind, according to media reports.

When it comes to racism, “I’ve heard the rhetoric like it’ll die with the old people,” Catoe said. But “no, it’s not going anywhere. That’s why education is such a strong thing,” so the church must “offer a different way of being Christ in the world to a new generation. … We have a message of love and a message of acceptance and affirmation and critical thinking when it comes to our faith.”

The panel also talked about the need for society to rise to the challenge and become more sensitive to injustice. “How can we not look at another human who is suffering and not be moved?” Lowry asked. 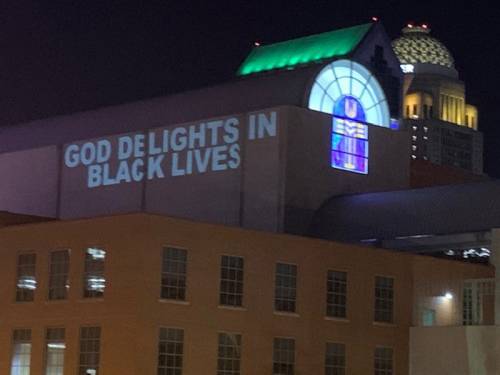 The Presbyterian Church (U.S.A.) headquarters in Louisville, Kentucky, has been emblazoned the past few evenings with statements affirming the value of Black lives. (Photo by Randy Hobson)

During an earlier part of the discussion, Gene Burke, an elder of worship at Salt & Light ministry in Philadelphia, talked about how he’s benefited from working with mentors who don’t just preach the Word; they put action behind it.

Watch a recording of the roundtable discussion and other Week of Action events here.