Register for the next Matthew 25 Online Event – Eradicating Systemic Poverty: Global Issues
Make A Donation Click Here >
Home › GA may not be coming, but it has had an impact on Baltimore ministry 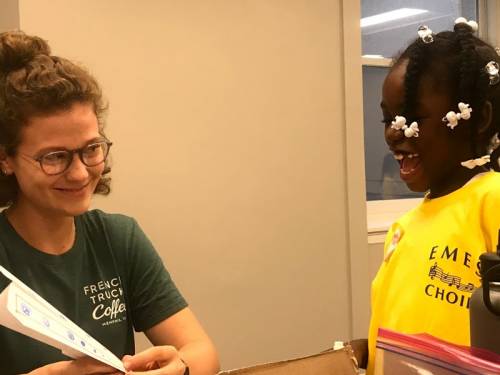 Olivia Thomas of The Center in Baltimore is photographed with a participant in last year’s Choir Camp, held at Brown Memorial Presbyterian Church. (Photo by McKenna Lewellen)

For the better part of two years, The Center, where she is executive director, had been anticipating the Presbyterian Church (U.S.A.) 224th General Assembly coming to Baltimore. The Hands & Feet initiative created by the Stated Clerk of the General Assembly of the Presbyterian Church (U.S.A.), the Rev. Dr. J. Herbert Nelson, II — to communicate God’s love and facilitate change in communities where General Assembly is held through grassroots community work, congregations, and mid councils — was largely focused on The Center, which was looking forward to hosting delegates to see and participate in its work.

Then COVID-19 intervened, and soon it became clear that a live gathering in Baltimore was not to be. But that doesn’t mean GA224 has not had an impact.

“Because of the design of the Hands & Feet initiative, much of the impact has happened in the two years leading up to now,” Connors says. 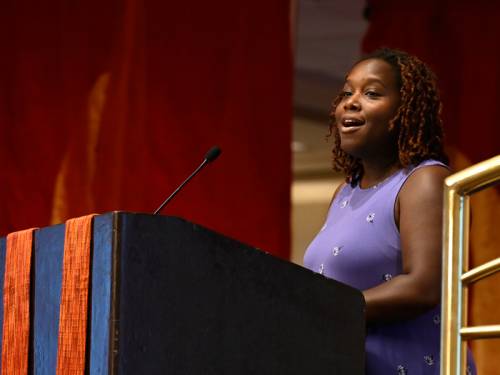 A big part of the impact has been Hands & Feet fellows Melva Lowry and Olivia Thomas, who Connors said have increased The Center’s capacity and imagination for ministry over their two years in Baltimore. The Center is a mission initiative of the Presbytery of Baltimore that partners with local congregations and organizations for neighborhood engagement and hosts groups from around the country to work in Baltimore and learn how they can serve their own communities.

Lowry, who calls Atlanta home, and Thomas, who hails from Louisiana, say the last two years have been a process of getting to know Baltimore and shake off preconceptions fostered by news reports of urban violence, rough policing including the 2015 death of Freddie Gray and the HBO crime drama “The Wire.”

“It’s getting to know the expanse of Baltimore,” Lowry said. “There really isn’t one description that fits all of it.” 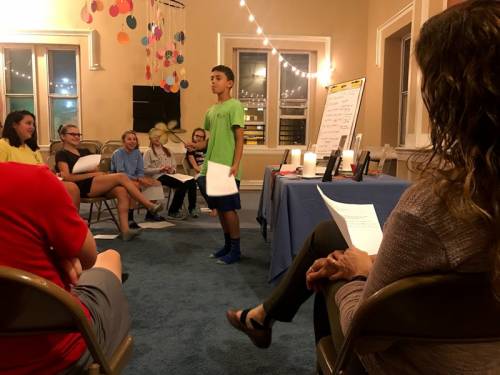 Youth share information about their sacred object during evening program time at The Center. (Contributed photo)

Among their observations are that despite being on the Northeastern-centric I-95 corridor, Baltimore is a “Southern city” in manner. In their two years, they have gotten to know neighborhoods, churches and students in the city, learning more about the issues underlying some of the preconceptions about the city.

“We do a lot of unlearning at The Center,” Lowry said. Rather than listening to what they have heard, they say it’s important to “pay attention to what’s around you.”

That’s a message they try to convey to visiting church groups.

One component of their work that will be presented at GA is an artwork Thomas has spearheaded created from found objects that work groups visiting The Center say represent moments they experienced God. While they were excited for GA participants to experience the work in person, it will still be presented online. An online component of the work was always in the plans, Thomas and Lowry say. Now it will just be the whole presentation. 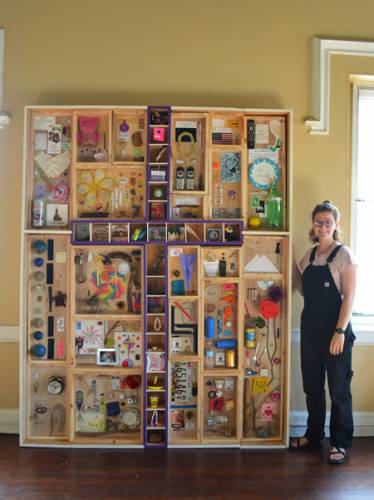 Olivia Thomas stands alongside the sacred art piece at The Center in Baltimore. (Photo by Charlotte Saunders)

Like Connors, Lowry and Thomas were looking forward to having General Assembly in Baltimore.

“For me, GA is a time that’s so warm,” said Lowry, a lifetime Presbyterian whose father is a PC(USA) minister. “It’s a time to reconnect with extended family.”

Of course, COVID-19 began having an impact on The Center’s work months ago. In-person relationships became virtual, when possible.

With students they worked with, they wondered, “How much are you learning, now that school is out?” Lowry said.

Connors said the pandemic and the limitations preventing its spread were a new challenge to The Center.

“It really presents an opportunity for the church to be the church in your neighborhood,” Connors reported that The Center staff members were telling partners.

Staff reached out to partner organizations trying to assess needs for things such as food, money, supplies and volunteers. One church, she said, did go knocking on doors in its neighborhood to see who needed food. 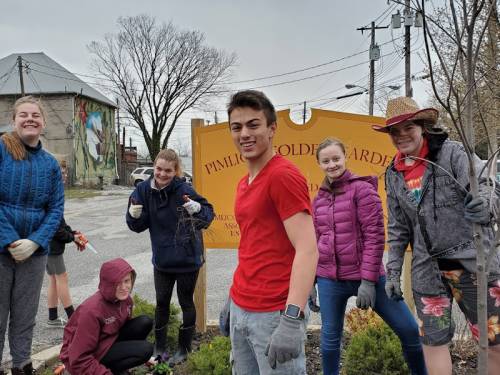 An outreach of The Center. Pictured are students who live in West Baltimore. (Photo by Melva Lowry)

“It’s a great time for churches to reach out to partners they already have relationships with and ask, ‘How are you doing?’” Connors said. “How can you be a good neighbor to them?”

Then, just under a month ago, the death of George Floyd in Minneapolis and Breonna Taylor in Louisville, Kentucky sent new shockwaves throughout the country. The Center fellows say it has been interesting to watch protests against systemic racism and police brutality play out in Baltimore, a city that had its own flashpoint five years ago with Freddie Gray’s death in police custody.

“Baltimore had its moment of rage,” Lowry said, noting that an outgrowth they saw from that time is a high level of organization in protests and engagement with government.

The Center also continues to engage virtually, even hosting online work groups who are familiarizing themselves with The Center and Baltimore through the staff and partners. As Connors and the fellows spoke, they were in the midst of hosting their first virtual work group this week. Among participants will be students in the city telling participants about their home.

Lowry and Thomas are also involved in Youth Rising, a young entrepreneurs initiative in Baltimore that will be highlighted June 23 during General Assembly. The young adults aiming to continue in ministry say it has been a time to think about church outside the institution and what that might look like.

In the end, while General Assembly will not be physically gathering in Baltimore, The Center and its fellows hope to still convey a more accurate picture of Baltimore than preconceptions that prompted Thomas’ family and friends to be concerned about her moving there.

“God is everywhere,” she said. “Baltimore is a beautiful place.”