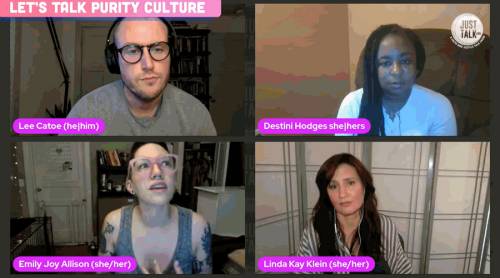 The May 4 episode of “Just Talk Live” focused on purity culture with two authors, Emily Joy Allison and Linda Kay Klein, who have written books about leaving the movement. (Screenshot)

LEXINGTON, Kentucky — The second Linda Kay Klein heard that the gunman in the March 16 shootings at three Atlanta spas considered his victims “stumbling blocks,” she knew he had been raised in purity culture.

“Stumbling block is a very, very common term in purity culture,” Klein said on Tuesday’s episode of “Just Talk Live,” the weekly Presbyterian online talk show from the Christian social justice journal Unbound. “Though the Bible doesn’t use it this way, it is often used as a shorthand to objectify women and girls as sexual objects who become blocks or things over which men and boys trip on their pathway to God.”

Klein knew this from plenty of experience having been called a stumbling block and told not to be a stumbling block growing up in an evangelical Christian environment. Klein is the author of “Pure: Inside the Evangelical Movement that Shamed a Generation of Young Women and How I Broke Free” and founder of Break Free Together, “a not-for-profit organization serving individuals recovering from gender- and sexuality-based religious trauma,” according to its website.

The broad understanding of purity culture is a strict prohibition against sex outside of heterosexual marriage, primarily associated with white evangelical churches. But Klein said she does not start the conversation there.

“I kind of start with gender because even though when we talk about purity culture, people often jump straight to sex and sexuality, it’s actually not,” Klein said. “I don’t think it makes sense to start there because the rules are so different. And at the end of the day, what we’re really talking about is a patriarchal system that also erases members of the LGBTQIA community, that is rooted in white supremacist thought and culture, that is deeply colonial, all kinds of other things.”

Purity culture, Klein said, is based in a strict binary of hyper-masculine men who are the leaders, particularly in the church and the home, and hyper-feminine women who are their followers and cheerleaders. Sex is strictly prohibited outside of a heterosexual marriage, but the expectations for each gender in maintaining this commitment are also very different.

“In this male category, the expectation is that men are going to struggle with that, because part of their hyper masculine, manly man stuff is that they are sexual beasts who can barely contain themselves,” Klein said. “And if they just see a little bit of skin, they’re gonna fall all over themselves and have no ability to control themselves.”

In purity culture, the responsibility for that falls to the women and girls to not be temptations for men — or they may cause them to stumble, Klein said.

This point of view, Klein said, erases sexual violence by blaming the victim for their behavior that may have been too much of a temptation for the man.

“One of the things that I think is so painful about purity culture is that all of these ideas, if you really think them through to where someone could go with this, you can see the kinds of places we ended up, right, even the horrific murder in Atlanta,” Klein said.

Eight people were killed, including six women of Asian descent, authorities have said, by a 21-year-old gunman who claimed he was battling a sexual addiction that was at odds with his Christian beliefs.

New York Times correspondent Ruth Graham wrote, “He seemed to have had a fixation on sexual temptation, one that can lead to despair among people who believe they are failing to follow the ideal of refraining from sex and even lust outside heterosexual marriage.”

“Purity culture is toxic theology in a toxic teaching,” Klein said. “Making the choice not to have sex before marriage, that’s not purity culture. That’s your choice.”

It is not, however, a teaching that Klein or Tuesday’s other guest, Emily Joy Allison, author of “#ChurchToo: How Purity Culture Upholds Abuse and How to Find Healing.”

“I mean, there’s a whole purity culture industrial complex, right?” said Allison, who is pursuing a masters in theological studies with a concentration in religion, gender and sexuality at Vanderbilt  Divinity School. “There’s the speaking circuit, there’s the rings, there’s the daddy-daughter dances, there’s the books, there’s the publishing industry, there’s a whole industrial complex around this. And so, especially because of the ways that sexual purity and sexual theology or a theology are sort of used as a litmus test of Orthodox Christianity in a lot of circles, if you come out and say, ‘Well, maybe I don’t think you have to stay abstinent until marriage,’ maybe ‘I think being gay is OK,’ … you can lose your job. Right?”

She cited a once thriving megachurch in the Nashville area that saw its membership plummet after affirming people who are LGBTQIA+ and supporting same-sex marriage as an example of the costs of not following evangelical teachings regarding sexuality.

Host the Rev. Lee Catoe said that his experience in the Presbyterian Church (U.S.A.) is that sex is largely just not talked about and observed that can be harmful as well. People who come from purity culture can be left dealing with rejecting teachings that said their eternal souls could be imperiled for leaving without another framework to understand sexuality, and young people can end up filling an information vacuum with unhealthy ideas.

Both Klein and Allison agreed a key is teaching values from a young age that apply concepts like justice to all aspects of life — including sexuality, at the appropriate time — and not setting up good and bad constructs that leave people feeling like they are in or out.

“We don’t give children enough credit,” Allison said. “I think that we think that children are like, not people, so they can’t handle things. Children are actually just people, right? They are people in development, but they are people. And so, children deserve the same kinds of honesty and openness that everyone deserves, right?”

Unbound is part of the Advisory Committee on Social Witness Policy, one of the Compassion, Peace & Justice ministries of the Presbyterian Mission Agency.