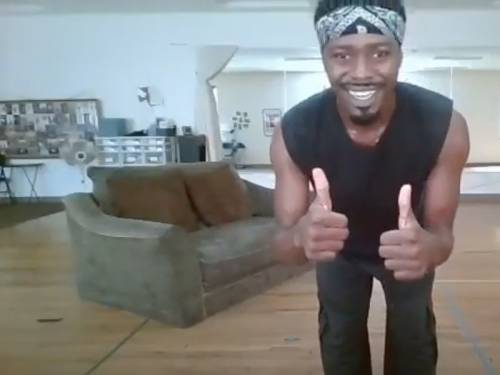 Simon Phillips uses dance and movement as a means of prayer and meditation. (Screen shot)

LOUISVILLE — Everyday God-Talk, with host So Jung Kim, has released a new video to help Presbyterians celebrate World Communion Sunday, which this year falls on Oct. 4.

The associate for Theology in the Office of Theology & Worship said she and colleague the Rev. Michael Gehrling wanted to learn a dance that would express gratitude for the global community in the church.

Gehrling, director of assessments for 1001 New Worshiping Communities, is also an amateur West Coast Swing dancer.  After teaching Kim some basic dance steps on Everyday God-Talk this summer, he and Kim began talking about a dance for World Communion Sunday that would  help the church appreciate how Christianity manifests itself in many different ways in the global church.

“We came up with hip-hop,” Kim said, “because just like Christianity it has many different versions around the world.”

And Gehrling knew just the right person to teach it:  Simon Phillips.  A professional dancer in Pittsburgh — where World Communion Sunday began at Shadyside Presbyterian Church — Phillips said he remembers being in church for as long as he can remember.

A Southern Baptist, he was literally in church from 10 a.m. to 4 p.m. each Sunday. He now uses dancing to express himself before God.

“It’s my spiritual way of exercising not only my body, but my spirit, mind and heart,” Phillips said.

After years of studying and hearing Scripture, Phillips said he had lots of questions about what God really meant in the gospel. He wondered how all of us could be under God, as sisters and brothers, if we all have different beliefs.

“Christianity lives in my spirt and bones, but I needed to get a holistic understanding of what that meant to me,” he said. “Today I understand God as personal and that God can mean so many different things to everyone in the world.”

In using hip-hop to celebrate the world, Phillips stressed the importance of understanding it as a rather new global art form. Developed in the 1960s and 1970s, hip-hop draws from instrumental jazz birthed in the South, which pulled from African roots, according to Phillips.

“Because it evolved from African tradition, you see a lot of basic African rhythms and steps manifest in modern hip-hop and in world religion today,” he said.

While there are different versions of hip-hop in places including South Korea, South American countries and the U.S., Phillips taught hip-hop to Kim and Gehrling from his understanding as a Black American.

“Steps, rhythm and attitude are the most important three things to remember,” he said.

“Embrace those and you’ll be a master of hip-hop.”

And then Phillips went to work. Counting in fours, he began to feel the beat.

Starting to bounce and bend his knees, he said, “1-2-3-4, feel the rhythm, down, down. This is where you start to see that African tradition of giving yourself to the Earth.”

Both Kim and Gehrling say they felt the Holy Spirit, along with inspiration and hope that this dance video will help give churches perspective and create a space where Christians can get together, recognizing the ways God works in people’s lives through various cultures.

In part two of Everyday God-Talk & Dance, Phillips will talk about the Black Lives Matter movement while teaching some of basic choreography of hip-hop.

You can give to the Peace & Global Witness Offering, which is traditionally taken on World Communion Sunday, to support the peace and reconciliation work of church partners through World Mission.