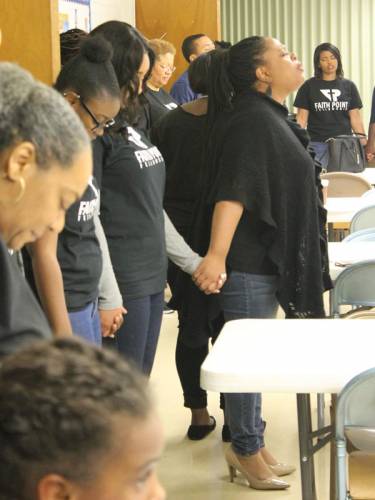 LOUISVILLE – At any given weekly meal and Bible study, or monthly worship at Faith Point Fellowship in Greensboro, North Carolina, the full scope of humanity is represented.

This worshiping community was planted when Saint James Presbyterian Church was inspired by the following opportunity:

Saint James began asking how they might reach a new generation of believers, by connecting with the college students who lived all around them.

In 2010, under the direction of the Rev. Dr. Diane Moffett, the church hired a campus minister and interns who functioned as evangelists and connectors on the five nearby campuses.

The campus ministry launched a new monthly worship service, Friday Fire, which averaged 50 participants. By 2015, 23 young adults had made formal membership commitments to Saint James. Four were baptized, including a self-identified atheist.

During those years, the campus ministry became a new worshiping community. Increasingly it became known as a place where people could engage critically with Scripture and culture at their weekly meal and Soul Food Bible study conversations, and at their monthly Thirsty Thursday worship service.

Those who came might never set foot in a more traditional church.

But at Faith Point — the atheist, the believer, the disappointed by church and even the gang member — can learn, worship and serve together.

“One young man described himself as having ‘a hard life on the streets,’ ” said the Rev. Eustacia Moffett Marshall, Faith Point’s pastor.

“He spoke about how he didn’t feel judged by Faith Point and that God was changing his life through our ministry.”

While his story is different than her own, Moffett Marshall believes it is through hearing different experiences that God sharpens human beings and their faith — as they learn together about God’s grace and love.

She credits her mother, Diane, as being the most influential person in her faith formation. It goes all the way back to when she was 6 years old, watching and listening to her mom in her first call at Elmhurst Presbyterian Church in Oakland, California.

“Even at 6, I somehow knew that we were in church a lot, because the gospel of Jesus Christ was changing people’s lives,” said Moffett Marshall.

“I began to want to know, ‘Who is this God?’ that my mom was so passionately preaching about.”

Looking back on what she felt and saw as a child, through the lens of what she knows now as a pastor, Moffett Marshall tears up when asked to describe the most influential person in her faith life.

“My mom, she’s the truth, the way she carries her life,” said Moffett Marshall. “I have no memory of her ever coming home and talking bad about people. She gave me a deep curiosity for God. It’s how I came to my own relationship with Jesus Christ.”

That influence from mother to daughter continues to reverberate in the Greensboro area — and beyond.

In 2010, Jasmine Evans became a full-time student at Winston Salem State University. She was working at Burger King as a single mom of a 2-year-old daughter. She barely had enough money to keep food on the table.

“It was an incredibly stressful time in my life,” she said.

One day her voice teacher, who was a colleague of the choir director at Saint James, told Evans about an internship at the church’s campus ministry. As Evans got involved in what would become Faith Point, Evans had something to look forward to.

“It was a place I could get spiritual guidance,” she said, “and have a shoulder to cry on — and not feel so alone.”

In 2012, when Moffett Marshall came on board to lead the campus ministry, it was a transition. As conversations began about it becoming a new worshiping community, there was a total paradigm shift.

“It was for the good,” said Evans. “We began to realize how to apply the Bible practically in our lives — to see faith as a relationship with God.”

Evans began to rely on God in newer and deeper ways. It helped her — and her friends — figure out their purpose in life and who they were created to be.

Evans recently received news that she’s been accepted to the School of Divinity at Wake Forest University.

“Honestly, I’d probably be a statistic if it wasn’t for Saint James and Faith Point,” she said. “I would’ve given up. A lot of times I was depressed, like I’d made a mistake which had set me back. But now I don’t feel like that. God works it together like it should be.”

Recognizing that there is a real hunger problem for college students, the worshiping community has a benevolence fund to help students in need buy groceries. They serve free hot meals on Thursday evenings before their Bible study. They also participate in Saint James’ Message and a Meal outreach program partnership with Cone Health, which gives students an opportunity on Sunday afternoons to serve a meal to community residents in need — and receive a meal themselves.

“I believe the church is the vehicle for God’s work in the world,” Moffett Marshall said. “As ambassadors of love and justice, we represent the hands and feet of Jesus.”

The Presbyterian Mission Agency Board will ask the 223rd General Assembly (2018) in St. Louis to confirm Moffett’s election. She currently serves as senior pastor of Saint James Presbyterian Church.