Nomination is subject to General Assembly 223 confirmation this summer 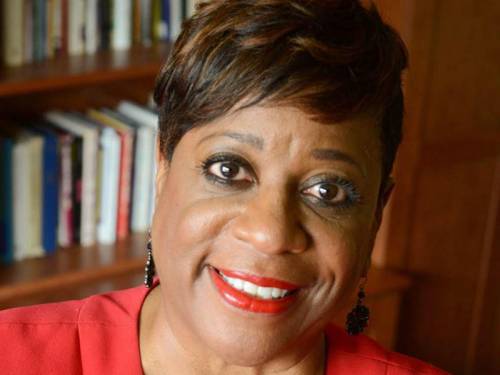 Currently the senior pastor of Saint James Presbyterian Church in Greensboro, North Carolina where she has served since 2005, Moffett is also the moderator of the Executive Council of Salem Presbytery and was previously moderator of Salem Presbytery. Current PC(USA) Stated Clerk, the Rev. Dr. J. Herbert Nelson, II, also served as pastor of Saint James several years before Moffett’s arrival.

Following a nearly three-year absence in settled leadership for the PMA, Moffett is positioned to take the helm of the agency that has been the focus of many of the reforms suggested by the Way Forward Commission and All Agency Review Committee, including the restructuring of the corporate entity, known as the A Corp, of the denomination.

Moffett, 59, began ordained ministry in the PC(USA) in 1987 at Elmhurst Presbyterian Church in Oakland, California. She also served in reconciliation efforts following the Rodney King riots, as executive director of Harbor House Ministries in Oakland, and as associate pastor of Elmwood United Presbyterian Church in East Orange, New Jersey, prior to moving to Greensboro where last year she made a bid for mayor.

During the afternoon conference call in which Moffett was elected, several people gave comments on her nomination, including Jan Edmiston, Co-Moderator of General Assembly 222 (2016), who said, “I’m so thrilled, I can’t tell you how exciting this choice is.”

“It is an honor for me to be in this position and I am grateful for the opportunities, and even the challenges,” Moffett responded, saying that as a lifelong Presbyterian she received much of her ethos for ministry from her grandmother, who “modeled a vibrant faith.”

“I am looking forward to working with all the staff,” she said. “I understand there are challenges, but there are also wonderful stories. … We can go no other way but up. [Our call is] to transform the world. That takes a lot of work and a lot of energy. It’s possible when we know who our partner is, and that’s the Lord.”

In an interview following the board’s election, Moffett said the PMA president and executive director position “felt like a fit for me.”

“It felt like what I had been doing, and perhaps what God had prepared me to do, was for this,” she said. “I’m very excited about the possibilities. I know there are challenges as there are in any ministry, but I really am excited about the staff and some of the great work the PMA is doing.”

Noting several of the challenges she’s aware of at the PMA and as the General Assembly considers its reform work this summer, Moffett noted that the church operates differently than a social service agency because of “the value we place on relationships.”

“I’ve said it over and over — God is about relationships,” she said. “It’s about our relationship with God, with one another and with this earth we occupy. [The life of faith] is about wholesome, healing relationships. I feel like that — from a pastoral standpoint — is going to be important as we move forward. … I believe this is a new season and I certainly invite people to think of it that way.”

Asked about her leadership style, Moffett responded, “I like leadership teams.”

“Teamwork makes the dream work,” she said. “I am very collaborative and like to bring people to the table to share ideas and get input. I think it’s also important to have a collective understanding of who we are so that everyone from the janitor who cleans the floors to the people who are out in the field understands what we are doing.”

Saying the PC(USA) has a “sense of building a legacy of love and of justice and bringing the reign of God into this space and place we call the earth,” Moffett sees this work making “the world a better place.”

Key to the mission of the PMA, Moffett believes her core values of “everyone is special, and everyone is precious” to God will work well with this emphasis. “There’s a radical inclusiveness that God has modeled for us in Jesus. It’s so important to get people at the table and talk about what we believe God is calling us to do.”

“I’m excited to begin this work,” she said, looking forward to also building relationships with the heads of the other PC(USA) agencies. “I’d love to meet the other agency heads. I’d love for us to sit down and talk about how we press the reset button and rebrand and start again.”

“Our church is so vital,” she said of these and other relationship building pursuits. “The Presbyterian Church has so much to give and I don’t want us to get distracted by that which would divide us or cause us to put our energy on things that don’t advance the mission of the church.”

Moffett will assume leadership of the Presbyterian Mission Agency on June 11, 2018. Her appointment is subject to confirmation by the 223rd General Assembly, which meets in St. Louis on June 16–23, 2018.

Hailing from a family of musicians, she is married to Mondre Moffett, a trumpeter and professor of black music studies at North Carolina Agricultural and Technical State University who previously played with the Duke Ellington Orchestra. They have three daughters: Eustacia Moffett Marshall, an ordained minister in the Presbyterian Church (U.S.A.); Jessica Moffett-Lee, an elementary school teacher in West Orange, New Jersey; and Kayla Moffett, an elementary school teacher in Newark, New Jersey.

You can read the search committee report and announcement from the Presbyterian Mission Agency Board, along with other biographical information on Moffett, at this link.