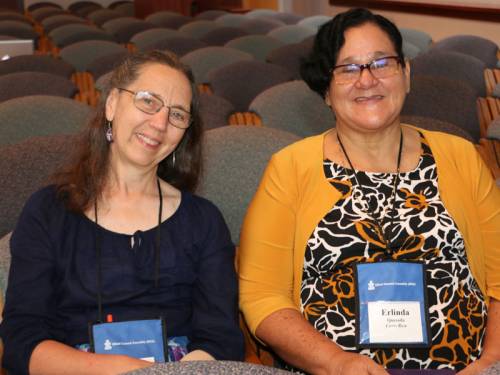 Erlinda Quesada of Costa Rica, at right, an advocate for environmental justice and human rights, is one of 12 International Peacemakers. She’s pictured with her translator, mission co-worker the Rev. Dr. Karla Ann Koll. (Photo by Tammy Warren)

LOUISVILLE — Since she was in her early 20s, Erlinda Maria Quesada Angulo has been an advocate for environmental justice and human rights. She initially became involved in social ministry at the Roman Catholic parish in the small village of La Guácima, in the Caribbean region of Costa Rica.

Quesada is one of a dozen 2019 International Peacemakers visiting congregations and mid councils on behalf of the Presbyterian Peacemaking Program, a mission of the Presbyterian Church (U.S.A.)’s Compassion, Peace and Justice ministry. Due to visa issues, Quesada is filling the peacemaker role assigned to Xinia Briceño, an administrator of three rural aqueducts and a water-rights defender in the Caribbean region of Costa Rica. Quesada and Briceño are both committed to advocating for the people and the natural resources of Costa Rica.

In 2000, she and other activists became alarmed by the negative impacts caused by expanding pineapple plantations on thousands of acres of forests and wetlands. She turned her angst into action in 2004 by helping found the National Front of Sectors Impacted by Pineapple Production (FRENASAPP). She now serves as president of the Environmental Council for the Tortuguero Conservation Area and as FRENASAPP coordinator and community promoter in Costa Rica’s Caribbean region.

In a March 2019 video created to communicate to the minister of agriculture the urgent need for a government moratorium on the expansion of pineapple production in Siquirres, Costa Rica, Quesada and other advocates spoke from their hearts to invite the minister to come and see how pineapple producers are continuing to drain wetlands and cut down forests in order to grow more pineapples. 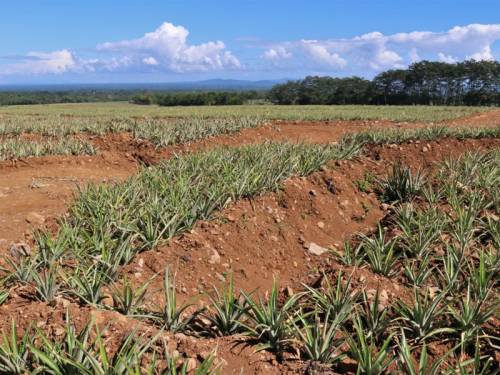 Pineapples are now grown on land that used to be forest. (Photo by Donald Lovett)

Quesada says in the video:

“There is evidence that the pineapple plantations are continuing to expand. We see this in our communities, as some communities have been left without water due to the destruction caused by the cutting down of trees and the draining of wetlands to produce pineapples. If you, Mister Minister, want to tour this area, we will gladly show you this destruction so that you can see the reality of our communities.”

With the significant loss of forests and wetlands to pineapple plantations, pesticides contaminating the water supplies of many communities and farmworkers — most of whom are migrants from neighboring Nicaragua — working the plantations for less than minimum wage, consequences for the environment and the people of Costa Rica are costly.

A documentary produced by DW-TV, a Germany company, “Where does your fruit come from and at what cost?” examines expanding pineapple production in Costa Rica and its many consequences for the ecosystem.

“Costa Rica projects this image of being an environmental paradise with wonderful environmental policies,” Koll said. “But things look much different on the ground. Pineapple production has expanded rapidly in recent years, and Costa Rica is now the world’s leading exporter of pineapples. These are grown on large plantations with very heavy input of agricultural chemicals. Several communities have had the springs that provide the water for their local aqueduct systems poisoned by the pineapple plantations, and neither the government nor the pineapple producers have taken responsibility to clean up the water sources.”

Koll added, “Communities are currently asking for a moratorium on the expansion of pineapple production and asking the state government in Costa Rica to protect the water sources and insist that no pineapples be planted within 20 meters of a community water source (slightly over 65 feet).”

Although a court ruling has called for the government and the pineapple companies to clean up the water sources, in Milano, a community of Siquirres, Costa Rica, the government has required residents to pay for new water pipes to bring clean drinking water from 11 kilometers (nearly 7 miles) away. “Milano is thousands and thousands of dollars in debt just to get access to water,” Koll said. “Meanwhile the pineapple growers are still expanding and still spraying. In Milano 28 different agricultural chemicals have been detected in the water.”

As Quesada and Koll tag-team to speak and translate in congregations and mid councils, the hope is that people will be encouraged to

Since 1984, the Presbyterian Peacemaking Program, a mission of the Presbyterian Church (U.S.A.)’s Compassion, Peace and Justice ministry, has helped make it possible for international peacemakers to inform Presbyterians, open hearts and minds, touch lives and inspire new ministries.

The International Peacemaking Program is made possible by gifts to the Peace & Global Witness Offering.